An essay on tropical cyclones

A tropical cyclone is a particular type of lowpressure system. It is called a hurricane in theUnited States and a typhoon in Asia. Tropicalcyclones are areas of warm, moist air risingrapidly. The upward ¯ow of air is de¯ected by theCoriolis effect (winds de¯ected by the Earth’srotation), creating a rotation around a centralcore, known as the `eye’. Tropical cyclones areoften accompanied by very strong winds (gusts ofover 300 kilometres per hour have been recorded),torrential rain (1800 millimetres in 24 hours havebeen recorded) and very rough seas.

Don't use plagiarized sources. Get your custom essay on
“ An essay on tropical cyclones ”
Get custom paper
NEW! smart matching with writer

A storm surge can occur when a tropicalcyclone approaches or crosses a coastline. Thevery low atmospheric pressure and the stress ofstrong winds on the sea surface produce a rise insea level above the normal tide level (see the diagram).

Among the destructive and death-dealingfeatures of tropical cyclones, sea action and¯oods are ranked as more signi®cant than winds.

This is why tropical coastalareas, such as the Caribbean Sea (CentralAmerica), the north-west Paci®c and north-eastAustralia, between 5° and 15° north and south, arecommonly affected by tropical cyclones.

The formation of a tropical cycloneHugecumulonimbusclouds form.

Cool air ¯ows into the centralarea to replace rising air.

The map shows the paths of major Australiancyclones since 1970. Tropical cyclones occur innorthern Australia between December and April,with the greatest activity usually occurringbetween January and March.

The number ofcyclones varies considerably from year to year, thefrequency usually determined by the temperatureof the oceans in the tropical waters around northernAustralia. The Australian Bureau of Meteorologytracks an average of ten cyclones per year in theAustralian region. Of these, six may be expected tocross the Australian coast. We will examine twomajor tropical cyclones that have hit different partsof Australia and their effects on people.

Major Australian cyclones since 1970On 20 December 1974, a low pressure systemseveral hundred kilometres north of Darwin wasnoticed by the Bureau of Meteorology. By late thenext day, satellite pictures indicated that it haddeveloped into a tropical cyclone. It was named`Tracy’, and a warning was issued by the TropicalCyclone Centre in Darwin. Tracy intensi®ed overthe next two days as it moved south-west andthen curved south-east towards Darwin. Thecyclone was tracked continuously by the Bureauof Meteorology at Darwin Airport.

Winds were abating in Darwin by 6.30 amas the cyclone weakened and moved furtherinland and degenerated into a raindepression.

Tracy was a small cyclone in area butvery intense, with a central pressure of950 hectopascals. Its destructive effect wastotal, because it passed directly overDarwin and hit just as the residents of thecity were preparing to enjoy themselves at Christmas.

Impacts and responsesTracy was Australia’s most destructive cyclone. Itcaused the deaths of 65 people Ð of these, 16 wererep or ted missing at sea. As well, there were145 serious injuries and over 500 minorinjuries. Between 50 and 60 per cent ofbuildings were damaged beyond repair.

Damage from the cyclone was over $4180million. Following the cyclone, more than35 000 people had to be evacuated Ð few ofthem still had homes, there were no essentialservices and the threat of disease was amajor problem.

Many people reacted heroically, workingat great risk to rescue trapped people. Governmentresponse included the provision ofemergency services and the building of anew Darwin Ð one that should be betterable to withstand any future tropicalcyclones. After Tropical Cyclone Tracy, newbuilding codes were introduced. Roofs fornew houses had to be tied to the foundations,and cladding was required to protecthomes from ¯ying debris.

One of the largest tropical cyclones to threatenQueensland in more recent times was TropicalCyclone Justin, which formed off the coast ofnorth Queensland in March 1997. It broughtwinds of up to 150 kilometres per hour, largewaves, heavy rain and ¯ooding. The cyclonestayed in the area for over two weeks with somechanges of position. It was unusual in that itremained almost stationary for up to ®ve consecutivedays.

Tropical Cyclone Justin left a path of destruction,including the devastation of sugar, pawpaw andbanana crops and severe damage to roads, bridgesand powerlines. Some buildings were also damagedÐ including the destruction of a $5 millionmarina in Cairns. Large areas of beach wereeroded by the huge waves and heavy swell. Therewas also some damage to parts of the Great BarrierReef. This is not unusual and not necessarilyserious, as the breakup of hard corals is seen bymany scientists as part of the natural `build-up andbreak-down’ cycle of reef and island development.

The total cost of the damage to Queensland was$150 million. Tragically, the cyclone also causedthe deaths of 33 people, 26 inhttp://cimss.ssec.wisc.edu/tropic/tropic.htmlhttp://www.ntlib.nt.gov.au/tracy/advanced/Met/cyclones.html

An essay on tropical cyclones. (2016, Jul 30). Retrieved from https://studymoose.com/an-essay-on-tropical-cyclones-essay 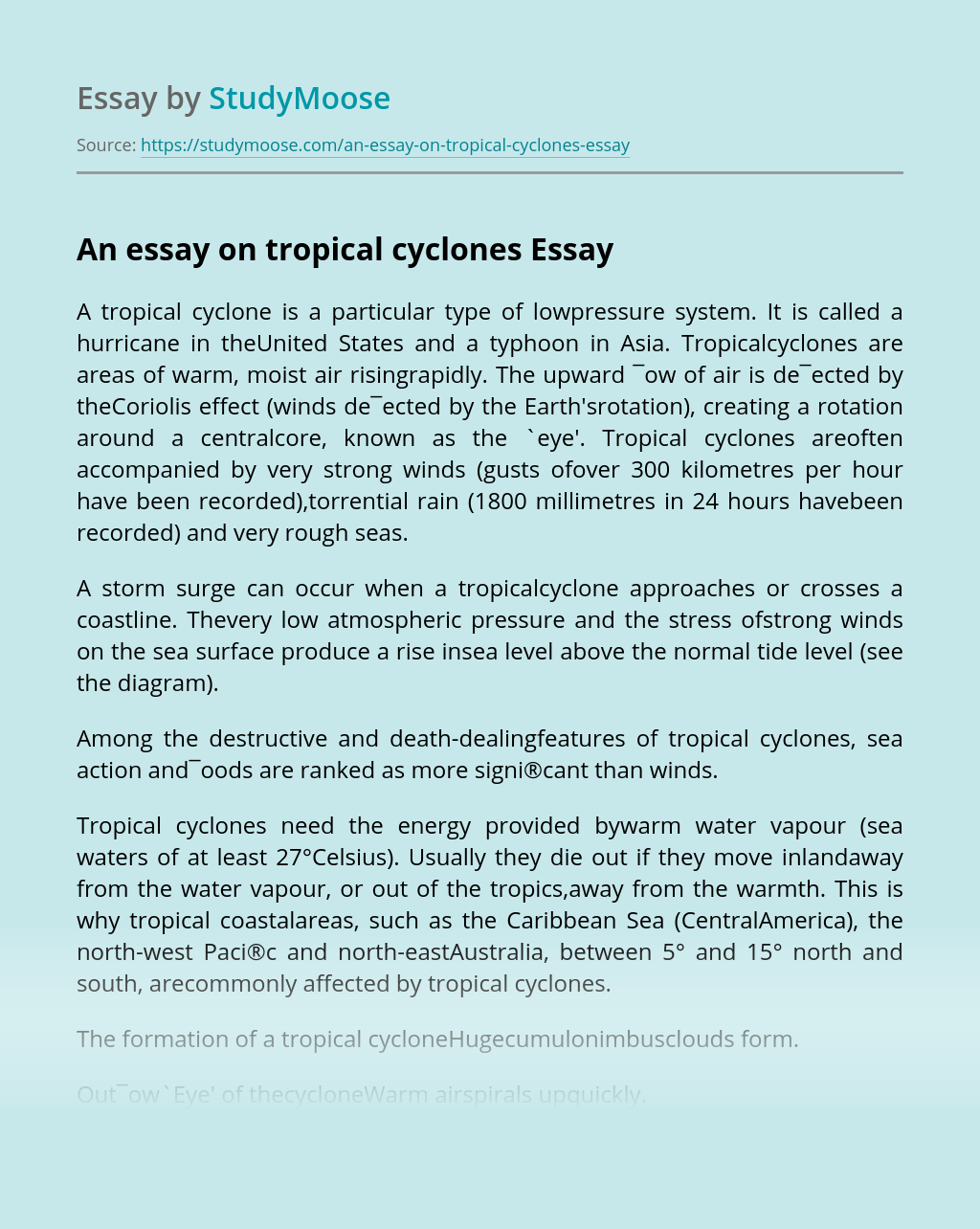