The Minimum Wage is Too Low

The absolute lowest pay (minimum wage permitted by law has been a point of emphasis in recent years. During the 2016 elections there were promises made from both candidates to improve and raise these wages. Today however these issues still have not progressed, and little has been done to try to settle this problem. The lowest pay permitted by law ought to be a reasonable wage, nonetheless, in many states it absolutely isn’t. Most businesses know that these wages surely are expected for expansion and progression of any company.

Don't use plagiarized sources. Get your custom essay on
“ An Argument in Favor of Raising Minimum Wage in the United States ”
Get custom paper
NEW! smart matching with writer

However, many individuals believe that pay increments will influence the economy and business’s in a negative fashion. Although, this is may be partially true, overall the benefits would outweigh the negatives and we would all make out better. Most companies seek little to no adjustment in making an improvement to wages. We, as compassionate human beings, can probably agree that the time has come to bring the lowest pay permitted by law up to a livable wage.

The minimum wage in the United States is too low and must be raised.

The enactment of a minimum wage was created to enable people to live with basic needs being filled. Although, this may have been a great idea years ago, it no longer holds true. The argument is not claiming that these persons should be paid wages to satisfy desires of life, but it should provide the individual with means to provide themselves with shelter, food, clothing and basic needs.

Let’s use Alabama as an example of the dilemma we face in this country. Alabama’s state minimum wage rate is $7.25 per hour. This is the same as the current Federal Minimum Wage rate. This would equate to a person working a forty-hour schedule to making two hundred-ninety dollars a week before taxes. Alabama’s laws allow for an under twenty-year-old to make $4.25 an hour for the first ninety days. A high school or college student minimum is $6.16 or 85% of the minimum wage. So, if you were working and going to school you would make less than someone who decided to not go to school and just work. Two hundred-ninety dollars. Does that seem like a fair living wage to you?

One popular reasoning that some hold is that these jobs were specifically designed for starter jobs for younger generations. These started jobs are not meant to support life despite the fact that these wages were designed to allocate the capacity to live. However, young people are not the only ones that hold minimum wage jobs. The fact is many people hold these jobs from all backgrounds and age groups and depend on them as their sole source of income.

With the minimum wage inevitably rising, due to federal mandates, we should not be afraid of the logistics of this change. There are many great things that come with the increase of the minimum wage. According the CEO and Co-Founder of Clear Company, Andre Lavoie, there are three reasons why we should be happy about the increase of minimum wage. It will help recruit and retain talent, improves employee satisfaction, and it improves your company brand. Many people are worried about the minimum wage increase. They believe that it will increase costs of goods, gas, and basic living expenses that we already pay large amounts of money and taxes for. However, that shouldn’t be the only thing that matters and may not happen at all. Businesses always find a way to cut where they need to take make things work. Consider this, if a leader of a company or boss of an employee has a happier team working for them because of increased employee benefits, there is a higher chance they will treat the employees better and respectfully. Employers are also less likely to be strict and excessive because everyone is happy and working hard and as a cohesive team. Paid sick leave and paid time off should be required by employers in order to keep employee retention rates high, increase company morale, and is good for business productivity and moral. The less employee turnover a company has the better the bottom line looks. Clearly, employee benefits are extremely important to the employees themselves, as well as the business in which they are employed.

An Argument in Favor of Raising Minimum Wage in the United States. (2021, Dec 13). Retrieved from https://studymoose.com/an-argument-in-favor-of-raising-minimum-wage-in-the-united-states-essay 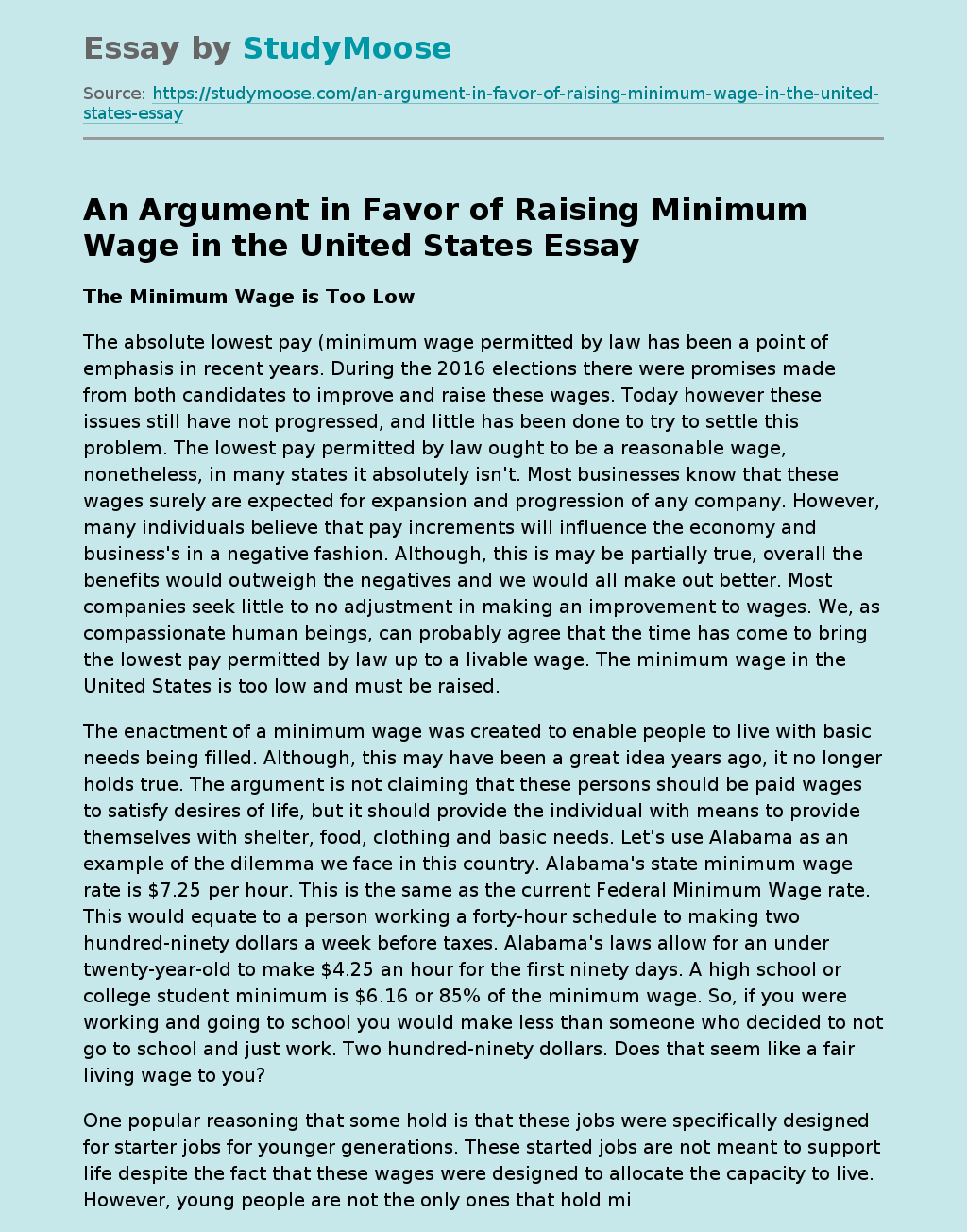