“Tuition rates were always low in Germany, but now the German government fully funds the education of its citizens — and even of foreigners” (Noak). In other countries such as Germany you can attend college for no costs, while in the United States, college students are struggling to pay off their tuition or even start attending school due to the costs. In most American universities, students need to pay their tuition before beginning their classes which means taking out loans. While in America where tuition is not free, student loan debt is at .

Don't use plagiarized sources. Get your custom essay on
“ An Argument in Favor of Free Tuition in America to Solve Unemployment ”
Get custom paper
NEW! smart matching with writer

2 trillion which $1 trillion of that is in federal student loan debt. Therefore the student loan debt is causing underemployment for graduates. The debt of student loans is a problem that will cripple economic possibilities and success to come, but this issue can be resolved with free tuition.

There are many European countries that offer free college tuition to their citizens and even foreigners. Other countries in Europe offer free tuition such as Finland.

There are a few countries that are not completely free but almost. Countries such as Brazil in South America have an insignificant fee amount to attend universities there, as well as Slovenia in Europe. According to an article entitled, “Top 5 Countries Where You Can Study for Free in 2015,” German students spend about 500-800 Euros in living expenses which is 548.62- 877.79 American dollars. American students spend about that on expanses if not more, plus their tuition. Another European country, Austria offers free tuition but living expenses are the same as in Germany.

College students are expected to have the tuition “paid” before attending meaning federal and private loans are to be taken out. In some circumstances college students can be granted money to pay for their tuition that does not need to be paid back. In order to figure out if a student qualifies for financial aid they are expected to fill out a FAFSA, a free application for federal student aid. The circumstances in which a student can qualify for financial aid such as grants would be; born before January 1, 1991, married, expecting to have children or have children. Other circumstances a student would have to be in is a U.S. military veteran or in active service, have dependents (other than your children or spouse) who live with them and who receive more than half of their support from them. Parents would be deceased since age 13 that were put in foster care or a dependent or ward of the court. Students would need to answer yes more than once to these circumstances on the FAFSA to be qualified for financial assistance. In these cases of answering yes, the student would be considered as an independent. For students who cannot answer yes to any of the questions are determined a dependent and have to provide parents income information. College students in situations that are considered dependent but pay for their schooling and other living expenses on their own are expected to pay for their education. In situations like these, the Federal government does not realize that students that do not have any family contributions are forced to pay for their education with no financial aid.

In order to resolve the student loan debt from increasing, college tuition should be free or less expensive. The affects of universities costs being so high and increasing can make a prospective college student not want to attend school. The reason for people to continue an education after years of grammar and high school is to prepare and educate themselves for a professional career as an adult. With college tuition increases, and already being high in costs people have less of a want to attend college. It is common nowadays that people do not attend college after high school due to different circumstances. According to the New York Times, the amount of American high school graduates who go on to college has been declining. According to the article entitled, “Fewer U.S. Graduates Opt for College After High School,” In October of 2001, 65.9 percent of people who had graduated from high school the previous spring had enrolled in college. The statistic shows that less people are going to college and one of the reasons for that is the costs of college are too high. The importance of higher education is clear nowadays it is hard to find a good paying professional job if you do not have a Bachelors degree. So what is America doing for their citizens? Charging students a ton of money making it difficult for them to attend college and better their education. America can solve this problem and make our college tuition affordable or even free like the countries in Europe.

In America, Higher education costs a lot due to the schools being very well-invested. According to the article entitled, “European Universities Vs American Universities: We Win,” the author states that in Europe, you won’t find the cute liberal arts colleges where the classes are small and the professors are eager to be mentors. We pay the price for fully invested college professors here in America with the expansive tuition and fees. According to the article, “American lesson: how to be top”, the more independent a nation’s universities, the better they are likely to be. Therefore America’s universities are more likely to better than European universities because the states have more independent universities. Although professors may be more eager to be mentors in America and the universities are more independent, the tuition is still very high.

“American universities have far more substantial means than those of European universities – on average, two to five times higher per student … The gap stems primarily from the low level of private funding of higher education in Europe.”

In conclusion, America’s tuition fees are not affordable for most prospective college students. In order to solve the college student loan debt from increasing more, America should either make college tuition free or affordable like a few of the European countries. While the European countries Germany and Austria are free, other countries such as Slovenia charge only a small fee to attend their universities. The issue of qualifying for financial aid can be resolved with affordable tuition for many college students like me. The purpose of higher education is to make a better life; it should not be so difficult for student to attend college. Since college is already stressful studying and maintaining a life outside of studies, the expenses should be lowered to do so. Therefore college students would not struggle paying loan debt if the tuition was free or more affordable.

Critical thinking, Reading and Writing: Did you rely on your memories, or did you conduct additional research for this assignment? If so, what sources did you consult? How did you use them? In order to write this assignment I had to conduct additional research to give factual information to support the view being argued. The sources I consulted in this research are located in the works cited area. I used the information received from the sources to give a better understanding on the subject of the pros and cons of each view of college tuition.

Knowledge of Conventions: What sentence problem did you find most frequently in your writing? How will you avoid that problem in future assignments? The sentence problems I found to be most challenging for this essay was using transitional words to start a new sentence or paragraph. In order to avoid this problem in the future I will continue to build my vocabulary by looking up different transitional words to be able to start paragraphs and sentences. I would do so by looking up these words in thesaurus and/or dictionaries.

An Argument in Favor of Free Tuition in America to Solve Unemployment. (2021, Sep 24). Retrieved from https://studymoose.com/an-argument-in-favor-of-free-tuition-in-america-to-solve-unemployment-essay 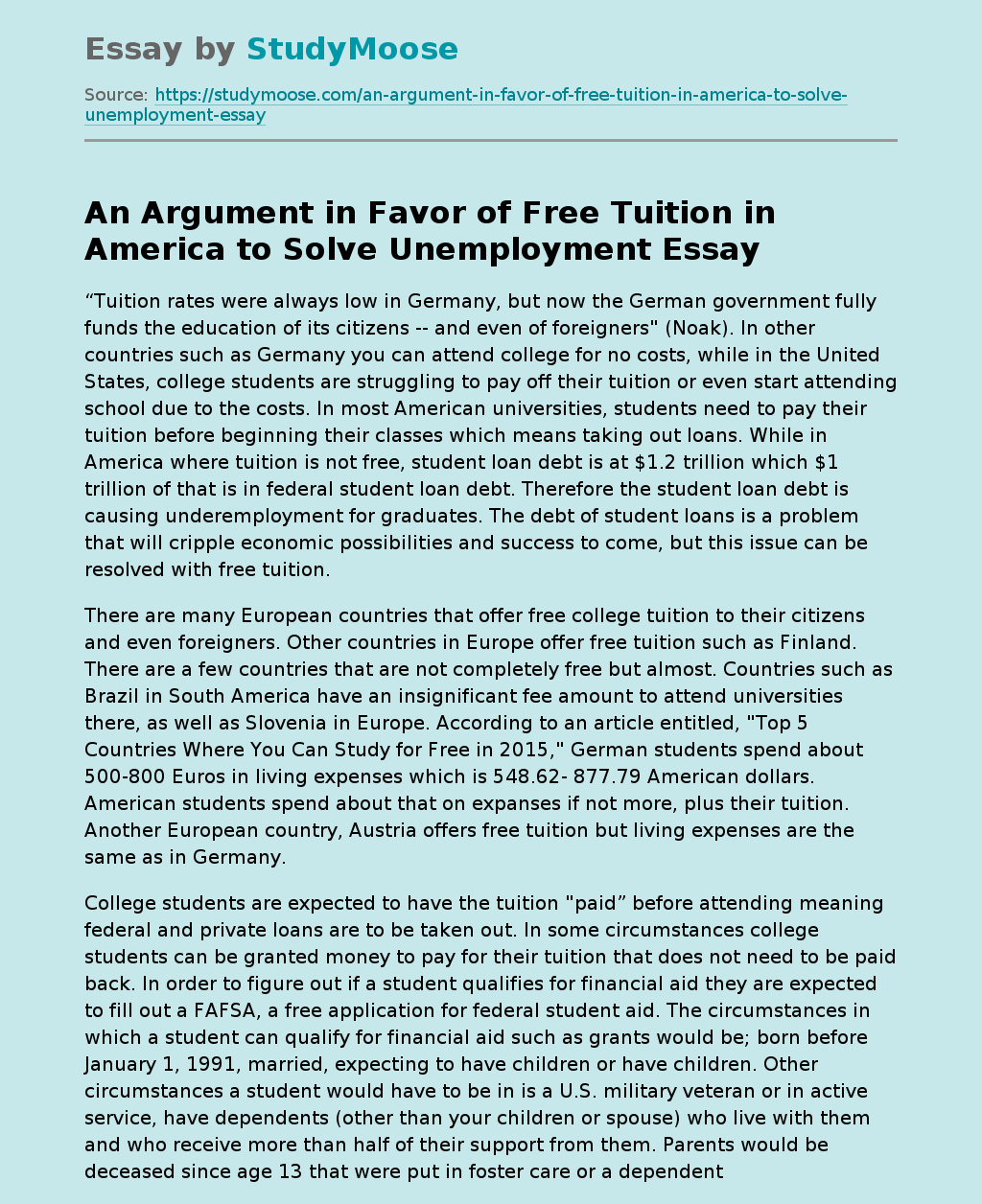