There exists a force, controlled by politicians, that can impact the American economy and way of life for all. This possibly devastating effect can be caused by the raising of the minimum wage. In my Visual Argument, I took a stance showing the negative impacts of raising minimum wage. Some of these negatives include: impressive amounts of job loss, especially for younger demographics, and increased inflation.

In my opinion, the most effective part of my Visual Argument against raising minimum wage was the graph showing the trend in rising teen unemployment as minimum wage increased.

Don't use plagiarized sources. Get your custom essay on
“ An Argument Against the Raising of Minimum Wage Due to Its Negative Impacts ”
Get custom paper
NEW! smart matching with writer

The reason I felt this was most effective was because of the extreme correlation between unemployment in teens and minimum wage increases. The parts which worked the least well in my project are the images I used for a few of the slides. I feel as though the photos chosen for the unemployment slide and the inflation slide could’ve been changed to a better choice to better represent the stance.

A better photograph with more emotional appeal would work much better, since my Visual Argument mostly focuses around logos. An increased amount of pathos would balance out my project much more effectively. I also believe a better choice of typography that could evoke more feelings would’ve been a smart addition.

Regular font is rather typical and standard, yet it still gets the point across. My usage of typing was very limited and was only used for titles, therefore I did not worry too much about the typography compared to the point I was attempting to get across.

Some peer review recommendations I received ranged from a different choice in font, to more use of pathos. A peer informed me of a few different photo choices I could’ve gone with to better appeal to emotions. In my powerpoint, I created a Visual Argument against raising the minimum wage, whether it’s statewide or nationwide. Raising the minimum wage has many negative consequences to the economy that impacts everyone’s lives. One of which is an increase in unemployment. Small business owners and especially restaurants cannot sustain paying all of their workers more money to match the raise in minimum wage, unless they increase all of their products’ prices, or cut costs elsewhere. Even larger stores such as a Walmart would feel a huge hit as they employ thousands of workers at near minimum wage.

Such an increase in unemployment can have devastating effects on thousands of families who rely on jobs that pay near minimum wage, while others may benefit. Also, businesses would have to increase prices to keep up with more money in the economy, and more money that the owners would have to pay out to employees. This is called inflation. Families that wouldn’t be directly impacted by a raise in minimum wage would be affected by inflation. Their wage wouldn’t increase, yet everything they were buying would. The American economy exists in a constant fragile balance. Seemingly insignificant decisions can have a extreme adverse effect to the balance. Raising the minimum wage can have an undesired effect to our everyday lives if politicians were to pass legislation allowing it. It is important to always pay attention to the possible impact of political decisions to our great country.

An Argument Against the Raising of Minimum Wage Due to Its Negative Impacts. (2021, Dec 13). Retrieved from https://studymoose.com/an-argument-against-the-raising-of-minimum-wage-due-to-its-negative-impacts-essay 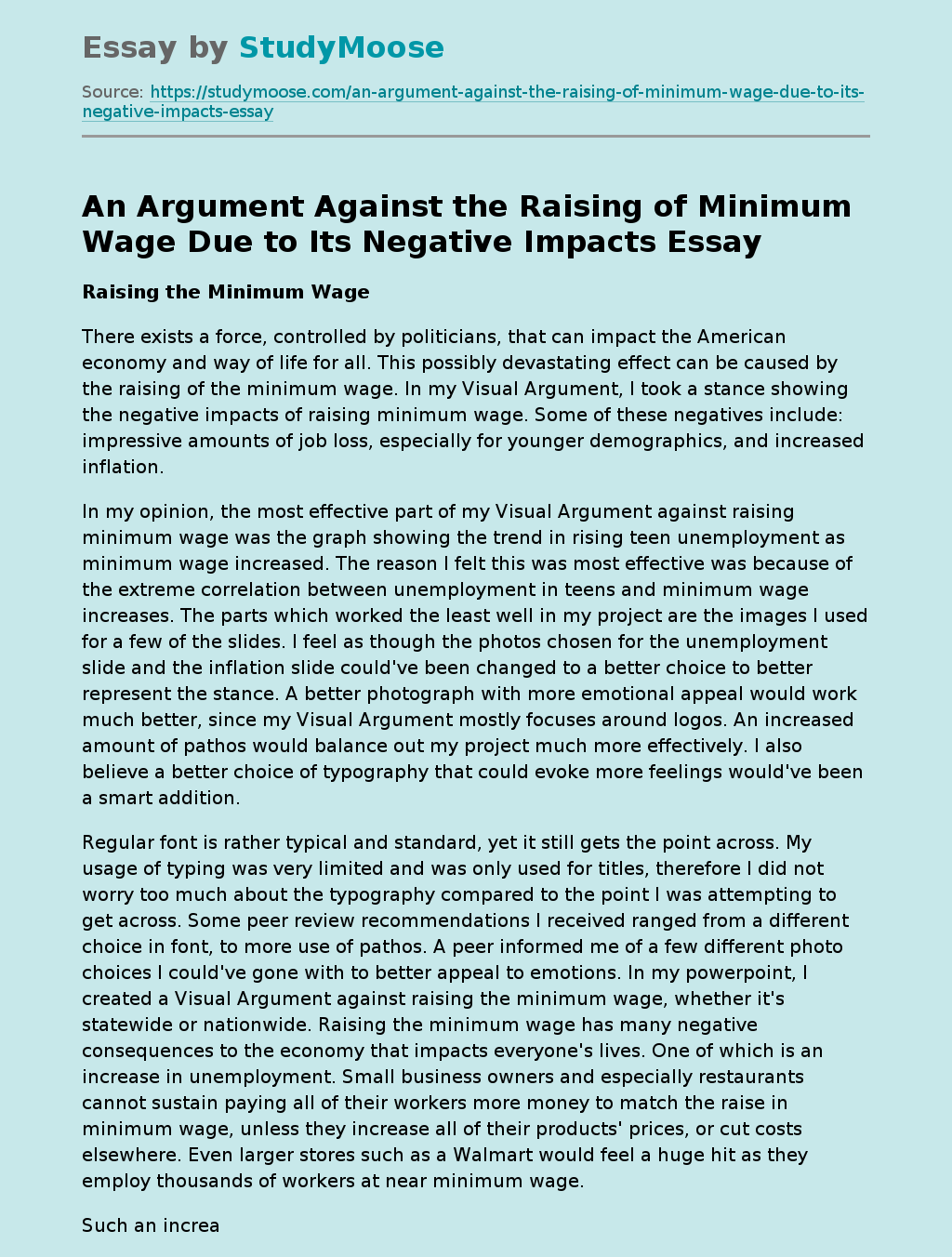