An Analysis of "The Klan's Fight for Americanism"

In 1926, Hiram Wesley Evans, then Imperial Wizard and Emperor of the Ku Klux Klan, published “The Klan’s Fight for Americanism”, a leaflet that set forth the principles and fundamentals of what many called the revival of the KKK in 1920’s America, a new version of the organization that was originally formed by Nathan Bedford Forrest after the Civil War in an effort to maintain the supremacy of the white man over the recently freed African-American slaves. The researcher will analyze and discuss Evans’ writing in this paper from the standpoint of his views and specific tenets to be found within “The Klan’s Fight for Americanism”.

Don't use plagiarized sources. Get your custom essay on
“ An Analysis of “The Klan’s Fight for Americanism” ”
Get custom paper
NEW! smart matching with writer

In addition, the researcher will present views as to whether or not Evans’ views agree with those of the researcher, and ultimately, a response to Evans’ view will be presented. Upon the conclusion of this paper, the reader will have a thorough understanding of Evans’ work as well as some possible alternative viewpoints on it.

A Brief Overview of “The Klan’s Fight for Americanism” In order to fully understand the various elements of Evans’ writing, and to adequately interpret it, a brief overview of the work itself is in order.

The previously mentioned revival of the KKK in the early 1920’s came in response to what the group called the “infestation by aliens” of America in the years immediately following World War I. As a result of the KKK’s revival, by 1926, the organization had over 3 million members. The KKK increased its list of those whom it hated to include Jews, Catholics, Communists, and those who were members of the labor unions that were gaining popularity in America during that time.

Evans, upon assuming control of the KKK in 1926, wrote “The Klan’s Fight for Americanism” as a means to lay the groundwork for what would be a new expansion of the Ku Klux Klan in the 20th century. Americanism as Defined by Evans One of the key terms that Evans uses in his writing is the term Americanism, something that he claims is a hallmark of the KKK. The term Americanism in this context has its roots in patriotism, something that the KKK claims to have in abundance; however, the interpretation of patriotism that the KKK has varied greatly from what one would usually find in the belief systems of someone like Abraham Lincoln, for example.

Patriotism, as the cornerstone of Americanism, in this case has some far reaching implications. First, consider the KKK’s definition of the American ideal within Americanism, which will first be presented by use of an actual quote from Evans’ work: “Americanism, to the Klansman, is a thing of the spirit, a purpose and a point of view, that can only come through instinctive racial understanding. It has, to be sure, certain defined principles, but he does not believe that many aliens understand those principles, even when they use our words in talking about them. . .

.In short, the Klansman believes in the greatest possible diversity and individualism within the limits of the American spirit. But he believes also that few aliens can understand that spirit, that fewer try to, and that there must be resistance, intolerance even, toward anything that threatens it, or the fundamental national unity based upon It” (Evans, 1926) . What Americanism is, for the Klansman, is the concept of liberty and justice for all, as Americans recites in their Pledge of Allegiance, but “all” has its limits along racial, ethnic and religious boundaries.

For the KKK, coming right from the pen of its leader at the time, the American Dream was available for those who qualified by being a certain race, nationality or religion, embodied in the KKK credo of “native, white, Protestant supremacy” (Evans, 1926). Using terms like “mongrelization” to describe the ethnic diversity that America was experiencing in large part due to the displacement of Europeans after World War I, Evans set up unlimited possibilities for a limited few, not much different from the slavery that America utilized prior to the Civil War. Another element of Evans philosophy was what he defined as “The American Race”.

This race encompasses people who are white descendants from the ancient Nordic tribes of Europe, Protestant in religion. Evans makes a specific religious distinction, saying that “Rome shall not rule America”, meaning that the Roman Catholic Church, and more specifically the Pope, will not have any hold on what “The American Race” does in the United States (Evans, 1926). A Response to Evans’ View While Hiram W. Evans, as an American citizen, has the right to express his opinions and views, likewise it is appropriate for the researcher to respond to what Evans wrote and professed in “The Klan’s Fight for Americanism”.

As a response, rather than embarking on a long tirade of random responses, his work will be discussed along the lines of carefully selected main points, which will give a better response to the overall work. Those key points are as follows: • DIVERSITY IS THE BASIS OF AMERICAN GREATNESS- No one can debate that the many contributions made to America in terms of the arts, sciences, humanities, education and more would not have been very significant were it not for those of many different ethnic backgrounds who came to America seeking a better life and ultimately made America a better place for others.

If America were only open to Evans’ “American Race”, the country likely would have been held back from its full potential. • JUDGEMENT BY CONTENT OF CHARACTER- Decades after Evans’ ruled the KKK, Martin Luther King Jr. professed that he dreamed of an America where people would be judged not by the color of skin, but my content of character. By limiting his view of Americans to be only those of the white race, Evans excluded many fine individuals from inclusion in the American Dream.

This exclusivity again would have compromised the ability of America to grow and thrive as it has. • ONE NATION UNDER GOD HAS MANY MEANINGS- The belief in God cannot, and should not be available only to those of the Protestant faith that Evans advocates in his teachings and writings. A nation built on many faiths can provide a strong moral foundation and indeed has in the case of America.

Aside from whether an individual’s belief in God comes from the Protestant, Catholic, Jewish or any of a number of other theologies, the teachings of respect for other people, peace, integrity and morality has helped to make America great. Agreement With Evans? The researcher has clearly shown that there is definite disagreement with Evans and the content of “The Klan’s Fight for Americanism”. Having the benefit of viewing the publication in hindsight, it is clearly seen that the American landscape would be vastly different in the 21st century if Evans ruled the 20th.

Closing Thoughts It was once said that those who do not learn from history are condemned to repeat it. In the case of Evans’ teachings and writings, this is definitely true. Luckily, the hatred that he professed has not totally dominated the American culture, but does exist today. Therefore, it is important for every American to pay attention to the past to avoid pitfalls in the future.

An Analysis of "The Klan's Fight for Americanism". (2017, Feb 03). Retrieved from https://studymoose.com/an-analysis-of-the-klans-fight-for-americanism-essay 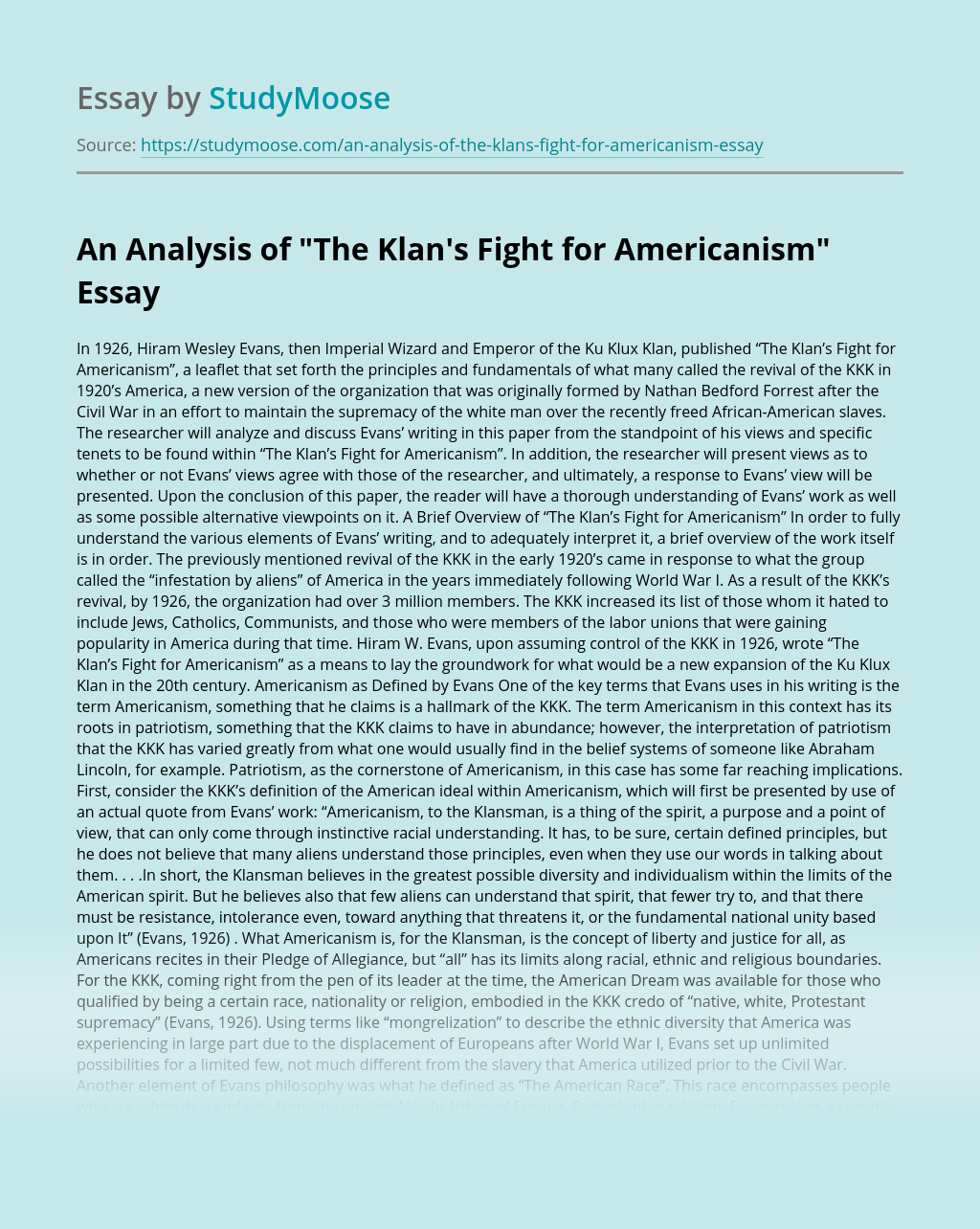