In the period from 1825-1850, a majority of the reform movements in the United States sought to expand democratic ideals. However, some did so indirectly and unintentionally.

The reform movements were spurred by the Second Great Awakening, which began in New England in the late 1790’s, and would eventually spread throughout the country. The Second GA differed from the First in that people were now believed to be able to choose whether or not to believe in God, as opposed to previous ideals based on calvinism and predestination.

Don't use plagiarized sources. Get your custom essay on
“ American reform movements of 1825-1850 ”
Get custom paper
NEW! smart matching with writer

According to Charles G. Finney, the role of the church is to reform society. In 1834, he said, “When the churches are…awakened and reformed, the reformation and salvation of sinners will follow.” Finney had been influenced by Second Great Awakening ideals. He goes on to say that “drunkards, harlots, and infidels” would also be converted do to reform by the church. In this sense, the Second Great Awakening helped expand democratic ideals by bettering the moral standards of the common man.

In 1835, Patrick Reason created an engraving depicting a black female slave in chains. Above her is the quote, “Am I not a woman and a sister??” This reflects how the abolition and women’s movements often tied into one another. Both of these movements helped expand democratic ideals in that they desired increased rights (specifically suffrage) for minorities. However, women and blacks were simply trying to increase their own influence in society, and were not otherwise looking to expand democratic ideals for the benefit of everyone (Native Americans, Irish immigrants, etc.

Nativism was also an important reform movement of this time period. Nativism was the belief that only white Anglo-Saxon Protestants should be allowed suffrage and other rights. People believed this partly from fear of a Catholic takeover, and partly because they did not want foreign immigrants competing with them for jobs.

Samuel Morse was a key supporter of nativism. In his Imminent Dangers to the Free Institutions of the United States, written in 1835, he stated “that no foreigner who comes into the country after the law is passed shall ever be allowed the right of suffrage.” The law he referred to was a proposed law to replace the current Naturalization Law of the time. This movement did not seek to expand democratic ideals.

Education reform was also an important movement of this period. Universal manhood suffrage created the need for education reform. The common laborer began to demand education for his children. This movement sought to expand democratic ideals in that more educated people meant more people would be able to be productive members of society. Emma Willard played a role in this movement as well as the Women’s Movement. She opened the Troy Female Seminary in 1821, which trained women to be members of the clergy.

William H. McGuffey invented the “McGuffey Reader.” This was a standard reader that all children read based on their grade. In a passage from a McGuffey Reader from 1836, a poor young boy discusses how his parents are “very good to save some of their money in order that I may learn to read and write.” He is referring to tax-supported public schools, which were a result of the education reform movement.

Alcohol abuse was becoming widespread throughout the early 1800’s. This was due in part to Elijah Craig’s invention of bourbon in 1789. Alcohol abuse led to decreased efficiency of labor, which was a problem for businessmen and consumers alike. The Temperance Movement began in an effort to end alcohol abuse. The American Temperance Society was formed in Boston in 1826, and urged people to give up alcohol. Neal Dow supported prohibition, and is considered the “Father of Prohibition.” He supported the Maine Law of 1851, which prohibited the manufacture and sale of alcohol. William Lloyd Garrison was an abolitionist who also supported temperance.

An 1846 cartoon entitled “The Drunkards Progress. From The First Glass To The Grave” shows what a detrimental effect alcohol had on the life of the common laborer. The Temperance Movement sought to expand democratic ideals in that it protected the common man from himself. It improved the common man’s productivity as well as his well-being by discouraging him from the evils of alcohol.

The Seneca Falls Convention of 1848 sought to expand democratic ideals more vigilently and radically than perhaps any other event of any movement. Lucretia Mott and Elizabeth Cady Stanton both played important roles in the convention. They produced a “Declaration of Sentiments” which stated that “all men and women are created equal.” They also produced a resolution formally demanding women’s suffrage.

In an excerpt from the Seneca Falls Declaration (August 2, 1848), Stanton states that the women are “assembled to protest against a form of government, existing without the consent of the governed–to declare our right to be free as man is free.” Here she refers to the government-by-social contract philosophy of John Locke. She goes on to declare that “strange as it may seem, we now demand our right to vote according to the declaration of the government under which we live.” Here she refers to the Declaration of Independence of 1776, which stated that “all men are created equal.”

Dorothia Dix travelled over 60,000 miles touring asylums across America. Her journals would help spread the idea that crazy people were actually mentally ill, and did not simply choose to be crazy. Her work led to 15 new hospitals and improved conditions in current hospitals of the time. While she did not seek to expand democratic ideals, she did improve the conditions in asylums, which is an indirect increase in the rights of the mentally ill.

In the period from 1825-1850, a majority of the reform movements in the United States sought to expand democratic ideals. However, some did so indirectly and unintentionally. 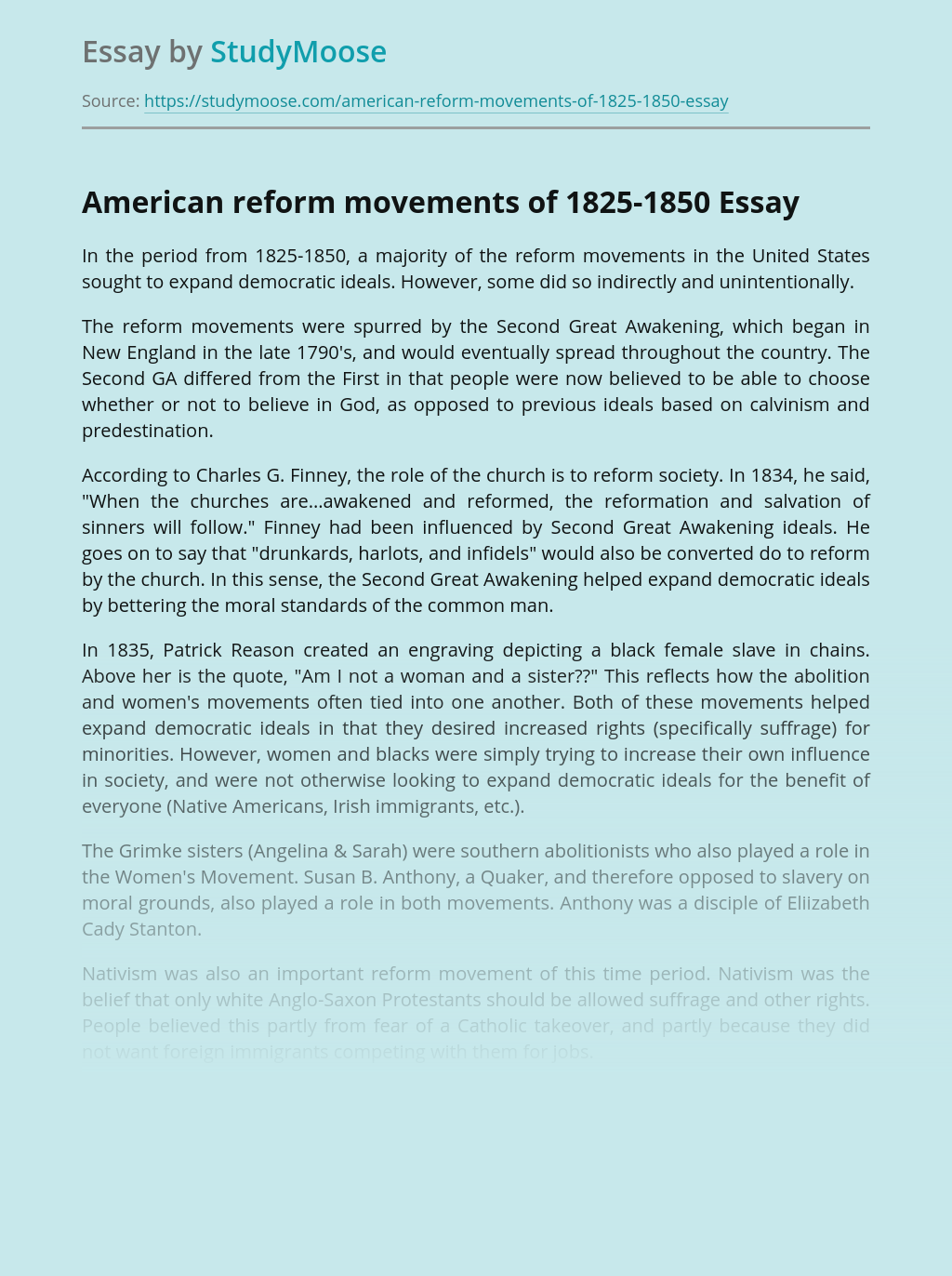