The Cold War was a period of tense rivalry between the United States and the Soviet Union.

Don't use plagiarized sources. Get your custom essay on
“ American History: The Cold War ”
Get custom paper
NEW! smart matching with writer

It took place after World War II as differences between the U.S. and the Soviet Union continued to escalate. Much of the disagreement came from not agreeing on what would happen to postwar Europe. Winston Churchill’s famous “Iron Curtain” speech is said to have been one of the main factors announcing the Cold War’s start. Joseph Stalin, a Soviet politician, swiftly responded to Churchill’s speech defending the Soviet Union. However, before analyzing Churchill’s speech and Stalin’s response, one must first look at what actions and policies exactly led to the Cold War.

Eastern Europe was a central area of disagreement between the two sides. The U.S. valued self-determination and democratic freedom, while the Soviets feared free elections since it could lead to traditional Anti-Soviet attitudes (Spielvogel 864). Another contributing factor was the U.S.’s foreign policy, known as the Truman Doctrine.

This policy stated that the United States would financially assist any country claiming to be endangered by Communist expansion. It was the U.S.’s response to potential Soviet expansion and consequently, the spread of communism, into the free world. Another contributing factor was Europe’s Recovery program known as the Marshall Plan, which provided substantial funding for Europe’s economic recovery post-war. The Soviet Union was not included in the plan while benefitting the U.S. since loans were paid to ensure Europe regained its economic and political independence (Spielvogel 866).

Finally, George Kennan, a well-known American diplomat with extensive knowledge regarding Soviet affairs, supported a policy of containment in America against additional forceful Soviet moves. Thus, the U.S utilized counteraction to correspond to the Soviet’s movements.

Winston Churchill’s “Iron Curtain” speech is said to have announced the start of the Cold War. Through his words, Churchill stresses the belief that Eastern Europe is in the “Soviet Sphere” and therefore controlled by the Soviets (“Winston Churchill Speech – Iron Curtain”). Further, he discusses the Russian government making mass removals of Germans and the Communist parties actively seeking complete control. Additionally, he discusses the Soviet government’s quest to create a Pro-Communist Germany in areas that will cause significant issues for America and Britain. With this, Churchill explains that individuals must fight for the Europe they wanted. A place with lasting unity to ensure safety for all. Churchill believes that a settlement is needed, sooner rather than later, since the danger is continuously rising. He believes that a policy recommending a balance of power is not the answer nor is one of appeasement (“Winston Churchill Speech – Iron Curtain”). Instead, he believed that Americans must stand together abiding strictly by its principles. They must not contribute temptation to any of Russia’s strengths, to ensure no harm comes to the United States.

In response to Churchill’s speech, Joseph Stalin stated that Churchill had consistently spoken in favor of English-speaking nations. Churchill asserted that only they should have the power to rule over all other nations (“Joseph Stalin: Reply to Churchill, 1946”). Stalin believes Churchill presented such an idea as an ultimatum that would end in war if not followed. On another note, Stalin confidently states that the Soviet’s loss of life has been so much more significant than America and Britain’s combined. Stalin’s support of the Soviet Union is unwavering as evident through his response. Ultimately, Stalin stresses that Churchill is merely expressing his idea of democracy. Stalin’s response to Churchill was harsh but calculated rather than emotional as he used the speech as a justification to organize the Soviets against their former allies. Further, the speech’s organization as an interview allows Stalin to state his personal views almost immediately. He calls Churchill’s speech a declaration of war while reminding the public that the Soviets suffered the most loss during the war (“Joseph Stalin: Reply to Churchill, 1946”). Ultimately, Stalin’s carefully planned response allowed him to share his thoughts on the issue while discrediting Churchill’s beliefs.

Overall, the Cold War was, in fact, inevitable as rising tension between the United States and the Soviet Union only continued to escalate. America was cautious of Soviet Communist and Stalin’s dictatorial control of his country. The Soviets held a grudge against America for their prolonged refusal to accept the Soviet Union as a valid part of the international group. Churchill’s speech predicted the inevitability of the war as he recognized both its soon awakening and the issues facing leaders after him. President Harry S. Truman contributed to the inevitability of the war through his Truman doctrine, which embraced a straightforward Anti-Soviet view (Spielvogel 866). Lastly, Stalin’s quest in spreading Communism throughout Eastern Europe and eventually, the rest of the world was another factor contributing to the war’s inevitability.

The Cold war was a long and tense period between the democratic United States and the Communistic Soviet Union. Mutual hostility and discontent rose from both actions and policies of both parties along with the words and actions of prominent figures, including Winston Churchill, Joseph Stalin, and President Harry S. Truman. With all things considered, the war’s inevitability was promising. 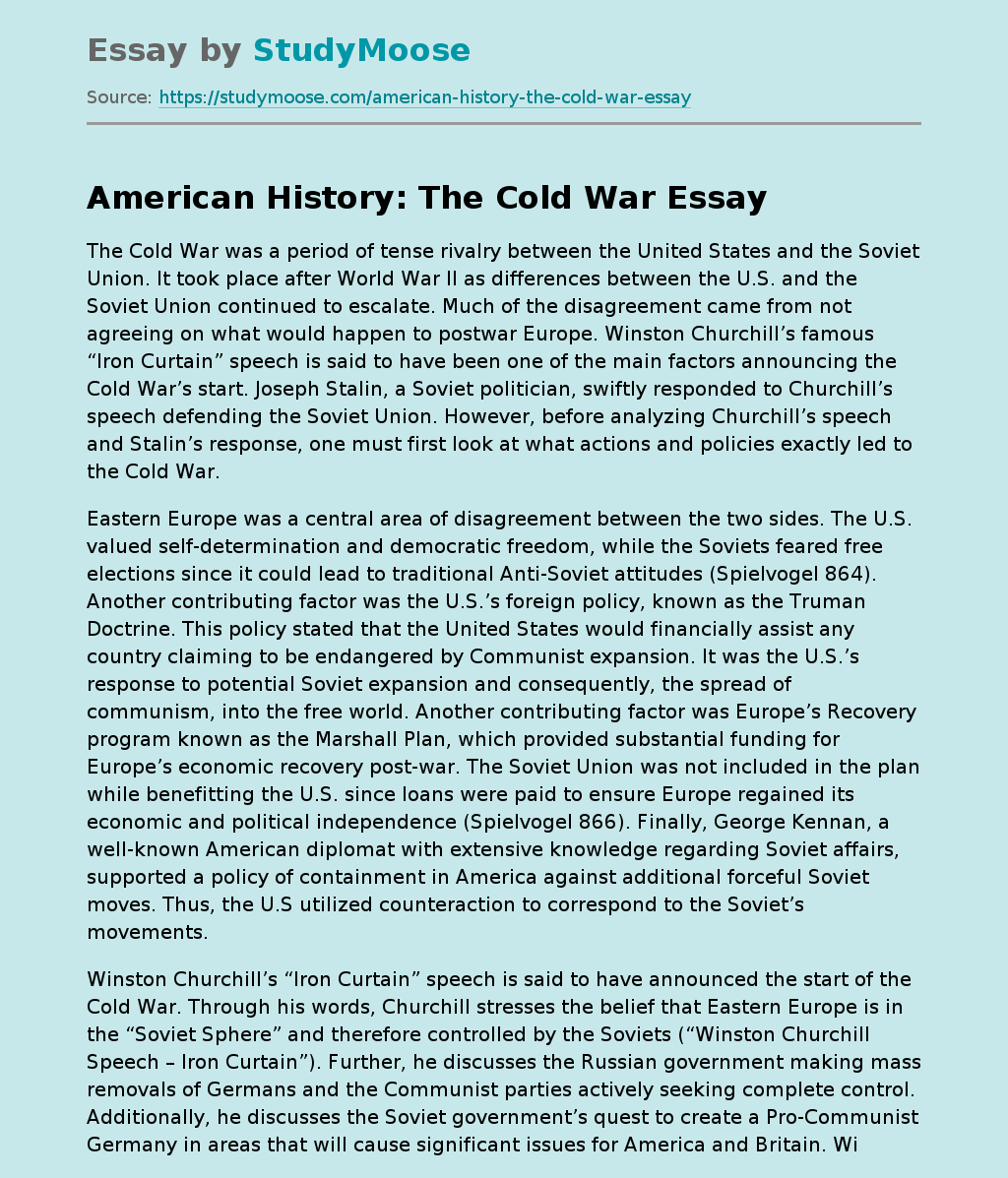