Told from the flash back perspective of an aged Antonio Salieri in an insane asylum to a priest for a confession, the movie reveals Antonio’s introduction to Wolfgang Amadeus Mozart, his professional career with Mozart, and his bitter rivalry and betrayal of Mozart. The film depicts an inaccurate account of Mozart’s life but still delivers on the pieces which he composed.

Throughout the film, we’re exposed to what are clearly historical inaccuracies. I understand that this film is an adaptation of the original Peter Shaffer’s Amadeus performed on Broadway in the 1980’s and for purely theatrical purposes to endow the story with a plot, these changes had to either be implemented or just purely fabricated in order for the story to make sense.

Don't use plagiarized sources. Get your custom essay on
“ Amadeus Biopic ”
Get custom paper
NEW! smart matching with writer

However, some of the erroneous interpretations of Mozart’s life are just impossible to ignore for anyone who even had even the simplest understanding of his life, such as myself.

The predominant trait of Mozart that stuck out to me like a sore thumb was his high pitched cackling laughter.

The movie’s laugh for Amadeus was constructed from letters that referenced Mozart having an “infectious, giddy laugh” much like “metal scraping glass” according to Forman. However, Robert L. Marshall, author of “Film as Musicology: Amadeus,” discredits this notion as there were no citations that provided the existence of such letters. Since Mozart lived over two centuries ago, there’s no possible way to know exactly how he sounded.

However, the brilliant Mozart in the film is supposed to be Gods creature (The Latin translation of Amadeus translates to “lover of God” or “beloved by God”) that usurps the mediocre Salieris position as the “voice of God.

” So in effect, his laugh is God mocking Salieri in his mediocrity which further drives the frustration and anger of Salieri towards Mozart thus pushing the plot along. While we’re on that subject, there is little evidence that Mozart and Salieri actually rivaled each other to the extreme that the movie depicts. Certainly, they were rivals, but they were professional rivals.

By professional rivals, I mean that even though they often butted heads in their pursuit of music and their attempted publicity of their works, they still admired and respected each other greatly. Despite Salieri being the inferior musician, he still pooled great respect from Emperor Joseph II and his subjects and served as court composer, director of the Italian opera, and court conductor. Mozart on the other hand came as an outsider therefore did not possess the same influence or reputation as Salieri. To me, this just appears to be the politics of music; it’s not what you know, it’s who you know.

Regardless, Salieri really didn’t have a reason to hate Mozart as much as the movie shows because his influence alone virtually neutralized Mozart as a threat. I’m sure when Mozart attempted to get his operas on the Italian stages it must have certainly irked Salieri, but never to the point of violence. However, once again the fiction is created in order to develop a sensical plot line. Without that aggressive rivalry, there’s no movie. One last thing that I personally found confusing is that absence of Joesph Haydn from the entire movie.

History tells us that Mozart and Haydn met somewhere 1783 or 1784 and instantly hit it off. They both admired each other’s work immensely and Mozart even went as far as to dedicate six string quartets to Haydn as a tribute to the father of the string quartet. Throughout their lives, they were in correspondence with one another up until Mozart’s death. However, despite this documented historical fact, Haydn is still left out of the movie. The movie itself is about two famous classical composers so why not add Haydn to attract Haydn fans to the play or movie?

One can only guess as to why that is. Perhaps Forman thought that the addition of another prominent classical composer would ultimately lessen the importance of the feud between Mozart and Salieri. But Forman fashioned other characters throughout the film in order to serve roles that further drove the plot, so why not use Haydn instead? Or at least mention him? At one point in the film, Mozart mentions that he doesn’t care for Gluck (which is also inaccurate, he was an admirer of Gluck), but nevertheless, he still at least mentions the name.

At this point it’s all speculation and I can’t find anywhere an explanation for his absence. The movie is riddled with other inaccuracies that raise a lot of questions, but if anything I learned in English is true, it’s that in order to read any literature that’s fiction or watch any movie, you’re supposed to “suspend yourself in willful disbelief” meaning that enjoy it for what it is without dissecting it too much, which I can honestly and wholeheartedly say I did. Although it doesn’t give an accurate portrayal of Mozart, Salieri or the setting it’s supposed to be placed in, it still gives an enjoyable experience.

Despite the erroneous depiction, the musical pieces revealed chronologically throughout the film are in fact the offspring of Mozart’s genius. Whilst enjoying each piece as much as the next, I don’t have the musical ear or expertise to discern which piece is being played in which scene, aside from the operas. However, the films composer John Strauss created a two disc soundtrack for the film and I have to admit, even though I lack the expertise, I am astounded by Mozart’s ability.

Luckily, between the internet and my own mothers personal love for music (Fortunately, she had a library of CDs that included many of Mozart’s work), I was able to essentially find each individual piece within the movie. I have to say, my favorite musical piece offered in the movie is the finale of the Don Giovanni. Perhaps some of it is because of the twist that Salieri puts on it; that “only [he] understood that the horrifying apparition was Leopald raised from the dead! The inference that I took from that between the monumental sounding music and the fervently conducting Mozart in the scene is that Mozart poured his personal misfortune of not living up to his father’s expectations in his work. It just makes it seem to be so personal, so passionate. I know that was the movies intent for me to feel that way, but I couldn’t help getting sucked in, between seeing the gargantuan black commander singing in the deep bass voice is what seems to me to be such an accusing tone allegorically “accusing his son in front of the world” as Salieri puts it.

All the while the plot twists during this play, as the madness grew within Salieri as he discovers such a simple way to destroy Mozart. It’s just so epic, for lack of better words. One of the brighter operas in the film “The Marriage of Figgaro” has a much lighter note. Despite all of the red tape Mozart endures, he nevertheless through the exceptionally brilliance of his music and borderline arrogance persuades the emperor to allow him to perform his opera.

While we obviously never get to see the whole thing, the music and performance we do see is good. I wouldn’t say I particularly cared for it. The colors, the notes, the lighting, it’s just too bright. However, the most impressive part of it is that his confidence in his music allowed him to break the traditional rules in order for his perform his opera. This seems metaphorically to portray the fact that Mozart’s music didn’t follow these contemporary musical rules of the time which contributed to his genius.

Perhaps that’s a long stretch, but that’s immediately what came to mind. While the movie is composed (Pun intended) of Mozart’s work, it would take an entire separate paper to dissect each one individually. Regardless, each piece performed in the play is enjoyable from one degree to another. Overall, I have to say I was more than happy with this movie. For a while, I dreaded watching the movie thinking it would be a long drawn out boring biographic film, but to my surprise it shared little characteristics with a biography.

The central thematic message of the movie is mostly if not entirely fictitious, but still lays a foundation in which the movie tells factual information about Mozart and sets a stage in which one can hear the pieces and enjoy them chronologically. To be frank and honest, if these fabrications of the bitter rivalry between Salieri and Mozart weren’t there, I would have had a hard time truly appreciating the Mozart as seen in the movie. Not to say his music is bad, it’s brilliant, but the underlying plot is what made the movie so interesting. Ultimately, if you’re looking for historical facts about Wolfgang Amadeus Mozart, look elsewhere. If you’re looking for a movie that’s interesting and loosely based on one of the world’s greatest composers who ever lived, look no further. 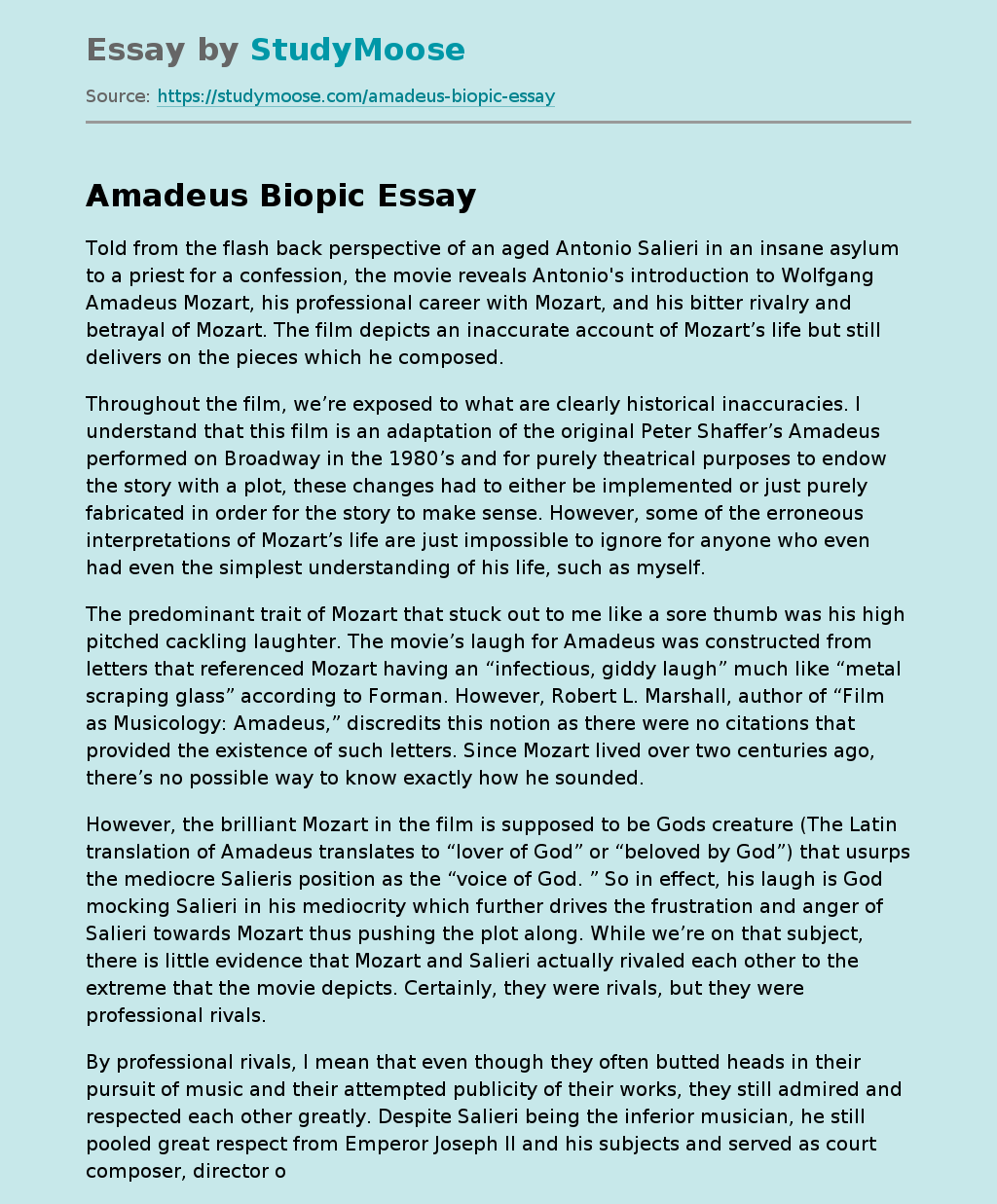