In the short story “Amigo Brothers” by Piri Thomas two boys, Antonio and Felix, are forced to fight for the golden gloves that they both want. Both boys are best friends and train together almost every day. Only one can win the golden gloves and advance to become a bigger boxer. The fight might harm their friendship but in the end they both are still friends despite the fight. Both Antonia and Felix have many interesting differences and similarities.

Don't use plagiarized sources. Get your custom essay on
“ A Comparative Study of the Characters of Antonio and Felix in the Amigo Brothers by Piri Thomas ”
Get custom paper
NEW! smart matching with writer

Antonio Cruz and Felix Vargas have several differences. First of all, “Antonio was fair, lean, and lanky, while Felix was dark, short, and husky (310).” This shows that Antonio is tall, and skinny in contrast to Felix who is shorter and bulkier. Secondly, Antonia and Felix have very different fighting styles. For example, “Antonio’s lean form and long reach made him the better boxer, while Felix’s short and muscular frame made him the better slugger (310).” From this we can see that Antonio is a better boxer and is better on the offensive side, while Felix is much better and being defensive and being a slugger.

Lastly, Antonio is more willing to continue a run in an awkward situation than Felix. For instance when Antonio asks Felix if he would like to continue jogging, Felix says, “Naw, bro. Let’s cut it here. You go on (312).” This shows that Antonia wants to go for a jog more than Felix and that Felix doesn’t want to continue jogging. Both boys, Antonio and Felix, have many great differences.

A Comparative Study of the Characters of Antonio and Felix in the Amigo Brothers by Piri Thomas. (2019, Aug 19). Retrieved from https://studymoose.com/a-comparative-study-of-the-characters-of-antonio-and-felix-in-the-amigo-brothers-by-piri-thomas-essay 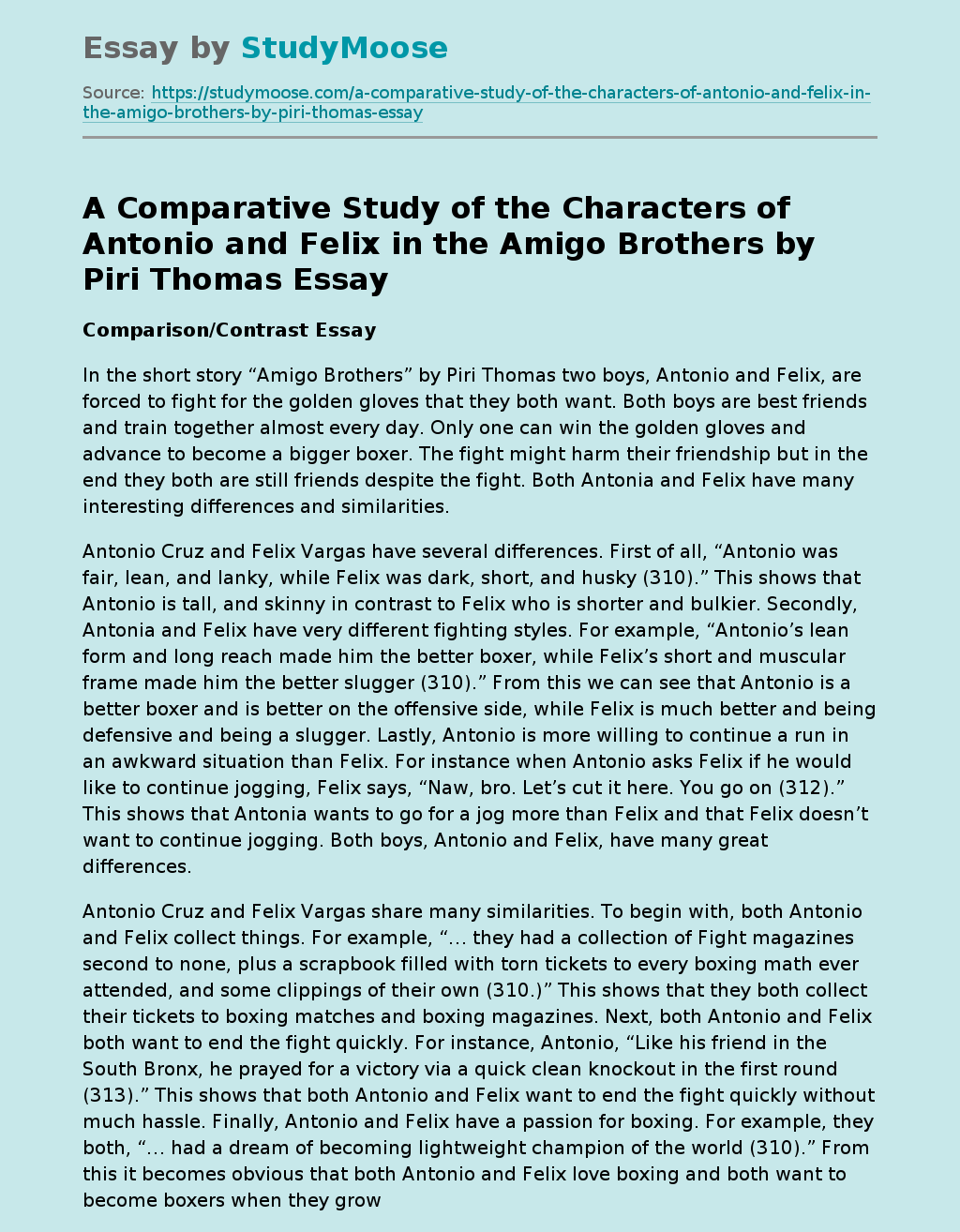