Allport's Motivation, Functional Autonomy and Study of the Individual

To Allport, an adequate theory of motivation must consider the notion that motives change as people mature and also that people are motivated by present drives and wants. Allport believed that most people are motivated by present drives rather than by past events and are aware of what they are doing and have some understanding of why they are doing it.

A. Reactive and Proactive Theories of Motivation

Adult behavior is both reactive and proactive, and an adequate theory of motivation must be able to explain both.

Don't use plagiarized sources. Get your custom essay on
“ Allport’s Motivation, Functional Autonomy and Study of the Individual ”
Get custom paper
NEW! smart matching with writer

An adequate theory of personality, Allport contended ,must allow for proactive behavior. It must view people as consciously acting on their environment in a manner that it permits growth toward psychological health. A comprehensive theory must not only include an explanation of reactive theories, but must also those proactive theories that stress change and growth. In other words, Allport argued for a psychology that, on one hand, studies behavioral patterns and general laws (the subject matter of traditional psychology) and on the other hand, growth and individuality.

Allport’s most distinctive and controversial concept is his theory of functional autonomy, it is Allport’s explanation for the myriad human motives that seemingly are not accounted for by hedonistic or drive reduction principles, which holds that some (but not all) human motives are functionally independent from the original motive responsible for a particular behavior.

Motives that are not functionally autonomous include those that are responsible for reflex actions, basic drives, and pathological behaviors. If a motive is functionally autonomous, it is the explanation for behavior, and one need not to look beyond it for hidden or primary causes. Functional autonomy represents a theory of changing rather than unchanging motives and is the capstone of Allport’s idea on motivation.

The other level is propriate functional autonomy; it is the master system of motivation that confers unity on personality, which refers to self-sustaining motives that are related to the proprium. Examples of propriate functionally autonomous behaviors include pursuing interests that one holds dear and important.

C. Conscious and Unconscious Motivation
Although Allport emphasized conscious motivation more than any other personality theorist, he did not completely overlook the possible influence of unconscious motives. Pathological behaviors are often motivated by unconscious drives, but healthy individuals are ordinarily consciously in control of their behavior.

VIII. The Study of the Individual

Because psychology has historically dealt with general laws and characteristics that people have in common, Allport strongly felt that psychology should develop and use research methods that study the individual rather than groups. To balance the predominant normative or group approach, he suggested that psychologists employ methods that study the motivational and stylistic behaviors of one person.

Allport distinguished between two scientific approaches; Traditional psychology relies on nomothetic science, which seeks general laws from a study of groups of people, and idiographic which refers to that which is peculiar to the single case or study patterns of traits within the single case, but Allport used morphogenic procedures because the term “idiographic” was so often misused, misunderstood and misspelled. Morphogenic procedures refer to patterned properties of the whole organism and allows for intraperson comparisons Allport accepted self-reports, such as diaries, at face value.

B. The Diaries of Marion Taylor

During the late 1930’s, Allport and his wife became acquainted with personal documents, including diaries, of a woman they called Marion Taylor. Although the Allports analyzed much of this information, they never published an
account of Marion Taylor’s story. Their work with Marion Taylor probably helped them organize and publish a second case- the story of Jenny Gove Masterson, another pseudonym.

A short time later, the Allports analyzed and published a series of letters they had received from an older women named Jenny. These letters constitute Allport’s best-known example of morphogenic science in that they reveal one person’s pattern of behavior. Two of Allport’s students, Alfred Baldwin and Jeffrey Paige, used a personal structure analysis and factor analysis, respectively, whereas Allport used a commonsense approach to discern Jenny’s personality structure as revealed by her letters. All three approaches yielded similar results, suggesting that morphogenic studies may be reliable.

Allport believed that a deep religious commitment was a mark of a mature person, but he also saw that many regular churchgoers did not have a mature religious orientation and were capable of deep racial and social prejudice. In other words, he saw a curvilinear relationship between church attendance and prejudice.

A. The Religious Orientation Scale

INTRINSIC RELIGIOUS ORIENTATION – refers to motivation arising from goals set forth by the religious tradition itself, and is assumed to have an “otherly,” nonmundane, even self- denying quality: religion is regarded as a master motive whereas other needs, strong as they may be, are regarded as of less ultimate significance. EXTRINSIC RELIGIOUS ORIENTATION – refers to a flagrantly utilitarian motivation underlying religious behaviors: the individual endorses religious beliefs and attitudes or engages in religious acts only to the extent that they might aid in achieving mundane goals such as feeling comforted and protected or acquiring social status and approval.

B. Religious Orientation and Psychological Health Research by Ralph Hood (1970) and others (Hansen, Vandenberg, & Patterson, 1995; Kosek, 1999; Maltby, 1999) has found that people who score high on the Intrinsic scale of the ROS tend to have overall better personal functioning than those who score high on the Extrinsic scale. In general, these studies have found that some highly religious people have strong psychological health, whereas others suffer from a variety of psychological disorders. The principal difference between the two groups is one of intrinsic or extrinsic religious orientation; that is, people with an intrinsic orientation tend to be psychologically healthy, but those with an extrinsic orientation suffer from poor psychological health.

Allport's Motivation, Functional Autonomy and Study of the Individual. (2017, Feb 27). Retrieved from https://studymoose.com/allports-motivation-functional-autonomy-and-study-of-the-individual-essay 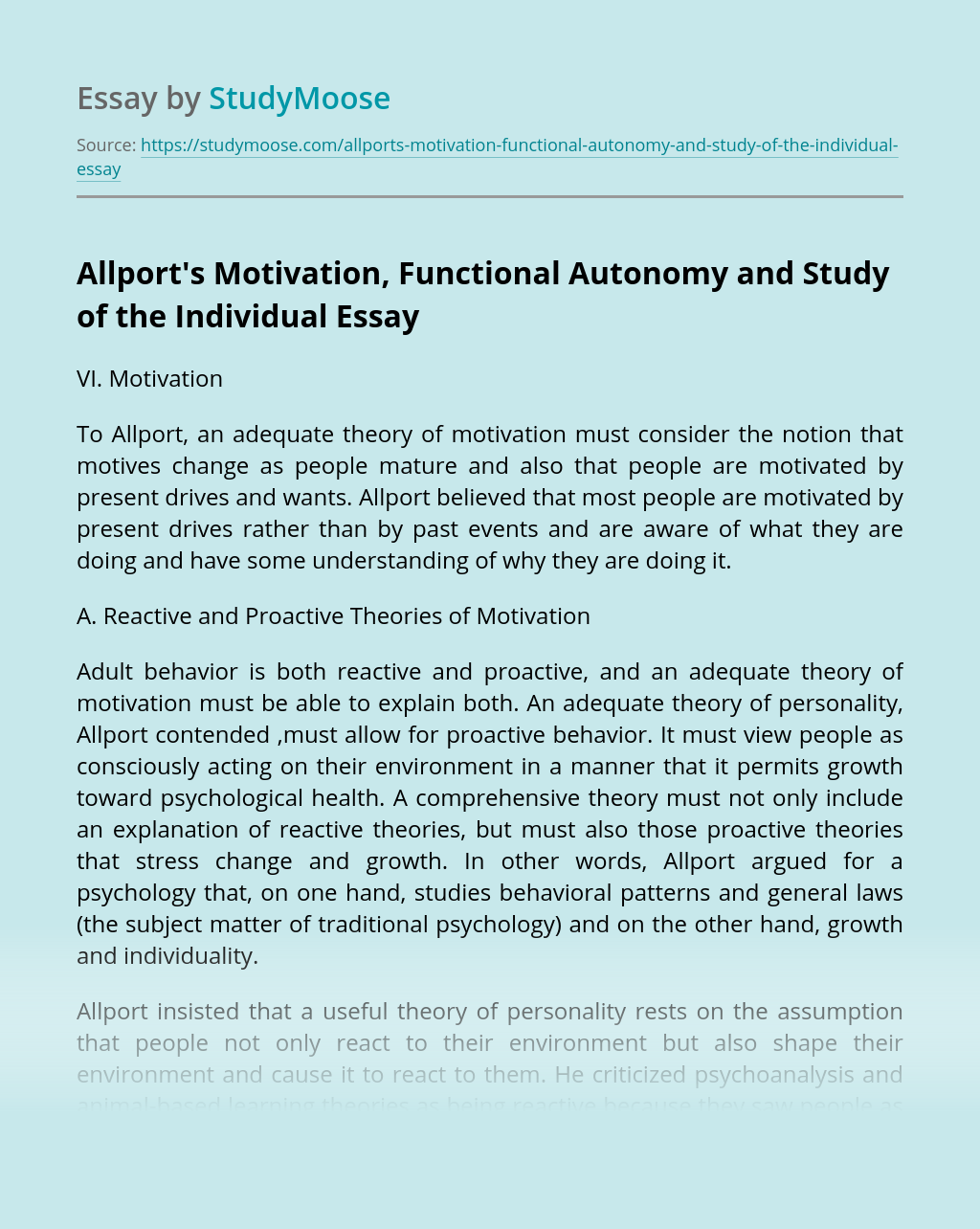