All Literature Is Protest

“All literature is protest. You can’t name a single literary work that isn’t protest” was a quote said by Richard Wright. My interpretation of this quote is that through all of literature, there is protest. There is protest from the protagonists and even the antagonists. I agree with this quote because in every piece of literature there is a conflict that one faces, and characters show their dislike towards something in different forms of protest. This quote is proven to be true in “Screeno” and “In Dreams Begin Responsibilities”, both of which are short stories written by Delmore Schwartz.

One way that this quote is portrayed is by using symbolism. In the short story “Screeno”, written by Delmore Schwartz, Cornelius Schmidt goes to a theatre to play the Lotto, and wins $425. However, as the manager is shuffling and counting the money, another voice from the audience yells “SCREENO!”, showing that he won the lottery as well. An old man walked down to the stage, and even though he legitimately won, the assistant manager tried talking him into believing that the number “1” on his card was actually a misprint, and read the number “7”.

Great symbolism is shown here- the assistant manager and the people working at the theatre symbolize a corrupt government. The assistant manager said “’I know it is a 7.’” (page 196), showing that he was so sure of that because the cards have been prepared in advance to remove the possibility of two winners of the jackpot. This corrupt government tried to trick the old man into thinking it wasn’t a 1 on his lottery card, even though he actually did win the money.

The people in the theatre symbolize a jury, and they decided to go on with the game show, without being bothered by the old man- “But the audience had decided once and for all” (pg 199).

Since at the end of the story Cornelius Schmidt gives all of his money to the old man, he is a symbol of justice. The old man was trying to protest against this Lotto case, because he knew it was unfair, so he was the victim of the corrupt government. Another way this quote is shown is through conflict. The old man and Cornelius are both having a conflict of Man vs. Society, which is when the values and customs by which everyone else lives are being challenged. Cornelius and the old man are both protesting against the assistant manager, because he was saying the old man had a misprint on his Lotto card. Cornelius wants the assistant manager to give the old guy his money so he could just leave and not worry about him anymore. However, Cornelius saw that the old man wasn’t giving up, and neither was the assistant manager, which led to a conflict of Man vs. Self.

This is an internal conflict, which Cornelius then “consider[ed] matters with himself again and came to a decision” (pg 200) to give the old man all of his jackpot money. Another way this quote is portrayed is by point of view. The point if view in this story was written is 3rd person objective, which is when the narrator is an outsider who reports on what he/she sees and heard. The narrator tells us what is happening, but he can’t tell us the thoughts of other characters in the scene. The narrator lets the readers be part of the story too, and be a jury, just like the people in the theatre. We could ‘judge’ the assistant manager, the old man, and Cornelius as much as we wanted to. Setting also lures the readers into being a part of the audience and judging the audience that are in the theatre because in a theater, people observe the events on stage and judge them how they want to. Since 3rd person subjective is just like “Tell it how you see it”, this protest is real and thus supports the quote.

Another way this quote is portrayed is in the short story “In Dreams Begin Responsibilities”, also written by Delmore Schwartz. The speaker in this story has a conflict of Man vs. Man, which involves a struggle, (mental or physical) between two characters in the story. The speaker doesn’t want to grow up to be like his father and make the same mistakes he has. His father put too much value in money. “My father tells my mother how much money he has made in the passed week” (page 4) shows readers that his father made his finance public, which wasn’t necessary. The author also writes that the amount of money had “been exaggerated”. The father also seems pessimistic on page 4, when he makes an announcement to the mother that ‘you have to die sooner or later anyway”. If the couple is on a date, the father shouldn’t be talking about things like them dying. This also leads to a conflict of Man vs. Self when the speaker wants to change how he will grow up; not to be like his parents.

“Only remorse, hatred, scandal and two children whose characters are monstrous!” show that the speaker thinks his own qualities are ‘monstrous’, and he thinks about changing them so he won’t be like his father. This quote is also supported through imagery in the story. The speaker’s parents were on a date, and while passing a fortune teller’s booth, the mother wanted to go in. The father did not want to do, and they “begin to argue about it” (pg 8). He was about to walk off and leave the mother there, which is not something a man should do when on a date with someone he is about to get married to. The father then “lets go of my mother’s arm and strides out” and the mother is “stunned” that he did such a thing. She is also “near to tears”, but she “refuses to budge”, which is an image of protest.

This shows that she will not leave until they have gone to the fortune teller. Another way this quote is supported is through characterization. The speaker has really low self esteem and he doesn’t want to become like his parents. While he is watching the movie about his parents before marriage, he protests by screaming at the screen. At one point the speaker got out of his seat and shouted “Don’t do it! It’s not too late to change your minds, both of you.” (pg 6), hoping his parents would end up not getting married and having kids with “monstrous” qualities (him). He doesn’t have any pride, because he feels that his parents have made many mistakes in their relationship.

He protests throughout the whole movie, trying to stop his parents from getting married, even though he knows it has already happened. At one point he even had an usher grab his arm and tell him “You can’t carry on like this, it is not right, you will find that out soon enough, everything you do matters too much” (page 9). However, it did not matter anymore, for the speaker had already woken up from his dream into the morning of his 21st birthday; in dreams begins responsibilities.

“All literature is protest. You can’t name a single literary work that isn’t protest” is a very important quote said by Richard Wright. The short stories “Screeno” and “In Dreams Begin Responsibilities” support this quote and prove it to be true. Several literary elements were used in order to show this including symbolism, imagery, characterization, conflict, and point of view.

All Literature Is Protest. (2016, Sep 12). Retrieved from http://studymoose.com/all-literature-is-protest-essay 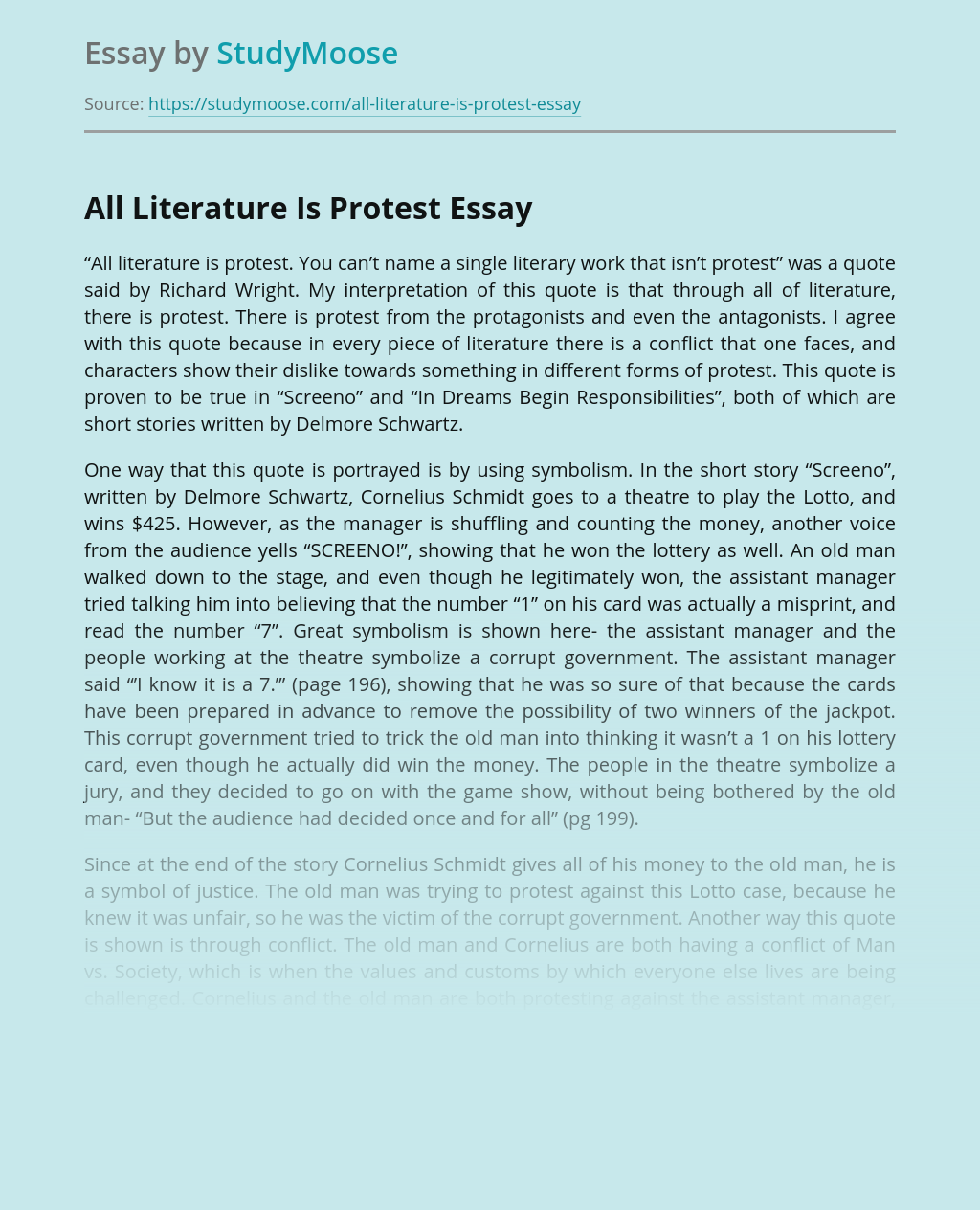 Don’t waste time
Get a verified expert to help you with All Literature Is Protest
Hire verified expert
$35.80 for a 2-page paper
Stay Safe, Stay Original