After the Revolutionary War, the United States was left with a $52 million dollar national debt as well as a $25 million dollar debt from the individual states. Alexander Hamilton developed a financial plan to re establish the credit of the US by providing for the payment of the nation’s debts.

Don't use plagiarized sources. Get your custom essay on
“ Alexander Hamilton’s Financial Plan After the Revolutionary War ”
Get custom paper
NEW! smart matching with writer

Answer A is the correct choice because the main point of Hamilton’s financial plan was to pay off the national debt in order to restore the nation’s credit.

Another way Hamilton proposed to pay the nation’s debts was to raise money through taxing. His plan increased taxes on imported goods, as well as placed a tax on items such as whiskey. This raise in taxes not only affected the rich but the poor as well because the tax related to a variety of items. As a result of the tax on whiskey, a group of poor farmers in Western Pennsylvania rebelled, resulting in the Whiskey Rebellion.

Answer B is incorrect because the taxes placed by Hamilton’s plan affected not only those most able to pay, but the average citizen as well.

One part of Hamilton’s plan that was not approved by Congress was to provide funding to manufacturers, in order to boost production and the economy. This plan failed in the end because of opposition from the South. He also proposed to create a “protective tariff” in order to protect US manufacturers from foreign competition. Answer C is incorrect because Hamilton’s plan favored industry over agriculture, not the other way around.

Around the Time that Hamilton was creating his financial plan, the US adopted a policy of neutrality. The US did not allot money to any type of military buildup, or need any their military for defense. Answer D is incorrect because during the 1970’s the United States was in a time of neutrality. Therefore Hamilton did not need to spend money on national defense.

Today, Hamilton’s financial plan still remains in effect. Federal Bonds are still issued by the government. A bond is purchased, and over a certain amount of time the bond matures into a larger amount at a profit to the holder. This allows the government to use the money owned by the bond holder until the bond is cashed in. These federal bonds now used in the 20th century were developed by Hamilton in the 1790’s.

Alexander Hamilton created a financial plan to help establish the United State’s credit after the Revolutionary War. The main goal of his plan was to provide for the payment of the nation’s debts. He did this by reissuing bonds, creating a protective tariff to protect manufacturers, combining the debts of the states with the nation’s debts, and creating a national bank to control the US’s money. 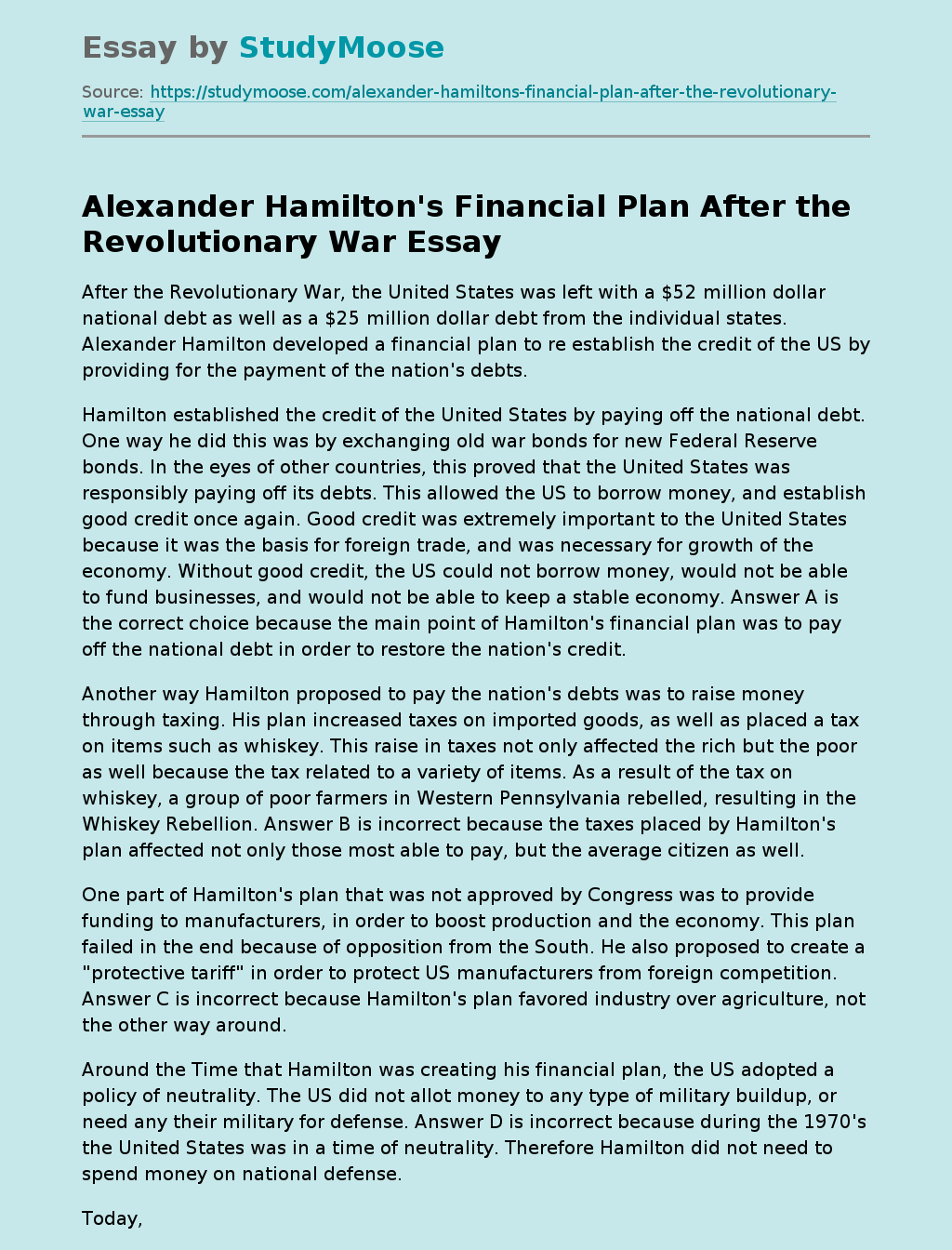