Alaska Purchase: The History of the Trade between Russia and America

We first learned about Alaska in 1741 when Captain Vitus Bering, a Danish navigator, landed on the Alaskan islands. Soon after his discovery, Russians established the first white settlement on Kodiac Island, in 1784. The Russian hunters and traders went there in search of valuable furs so that they would become rich. In 1799, Russia chartered the Russian-American Company, a trading firm. Alexander Baranof became its manager and the company was the only governing body in Alaska for sixty-eight years. Baranof treated the natives harshly and enslaved the Aleuts.

Don't use plagiarized sources. Get your custom essay on
“ Alaska Purchase: The History of the Trade between Russia and America ”
Get custom paper
NEW! smart matching with writer

During 1799, he also founded a settlement near present-day Sitka and in 1802, it was attacked by the Tlingit Indians, who killed and captured most of the Russians there. In 1804, Baranof returned to the area with a large force of Russians and Aleuts. They quickly defeated the Tlingit Indians and built New Archangel on the battle site, which later became Sitka. New Archangel soon became the largest town in RussianAmerica.

The Russian-American Company prospered when Baranof was the leader, but after he was replaced in 1817, it declined.

The people who took over were naval officers who hardly had any interest in the business, plus competition from the Americans, Canadians, and the British also made it hard to earn a profit. In addition, animals with fur were becoming more and more scarce, due to over-hunting. In 1824 and 1825, two separate treaties were signed by Russia, one dealing with Britain and the another dealing with America. In these treaties Russia recognized latitude 54 degrees 40′ as the southern boundary of Russian territory in America.

By the 1850s, the Russian-American Company was no longer interested in trade, mainly due to the fact that the Russian government had taken over a large part of the company’s affairs. After the Crimean War (1853-1856), Russia wanted to sell Alaska and U.S. Secretary of State William H. Seward agreed to purchase Alaska for $7,200,000 (About 2 cents per acre). On March 30, 1867, he signed the Treaty of Cession of Russian America to the United States. Some Americans opposed the purchase of Alaska, but many were in favor of it and Congress approved it. On October 18, 1867 the U.S. flag was raised at Sitka.

Congress did not provide for an Alaskan government during the next 17 years and Alaska was administered first by the War Department, then by the Treasury Department, and then by the Navy Department. These agencies had little interest in the local problems of Alaska.

A few American companies were interested in the rich salmon fisheries of Alaska and in 1878, the first canneries were built in Alaska. In 1884, the first Organic Act was passed by Congress, which established Alaska as a “civil and judicial district.” Alaska received a code of laws and a federal court, but the laws were from Oregon and were not adapted to Alaska’s conditions. Congress kept the power to pass laws for Alaska. Later in 1912, Congress established Alaska as a U.S. territory and on January 3, 1959, Alaska became the 49th state.

Alaska Purchase: The History of the Trade between Russia and America. (2021, Dec 07). Retrieved from https://studymoose.com/alaska-purchase-the-history-of-the-trade-between-russia-and-america-essay 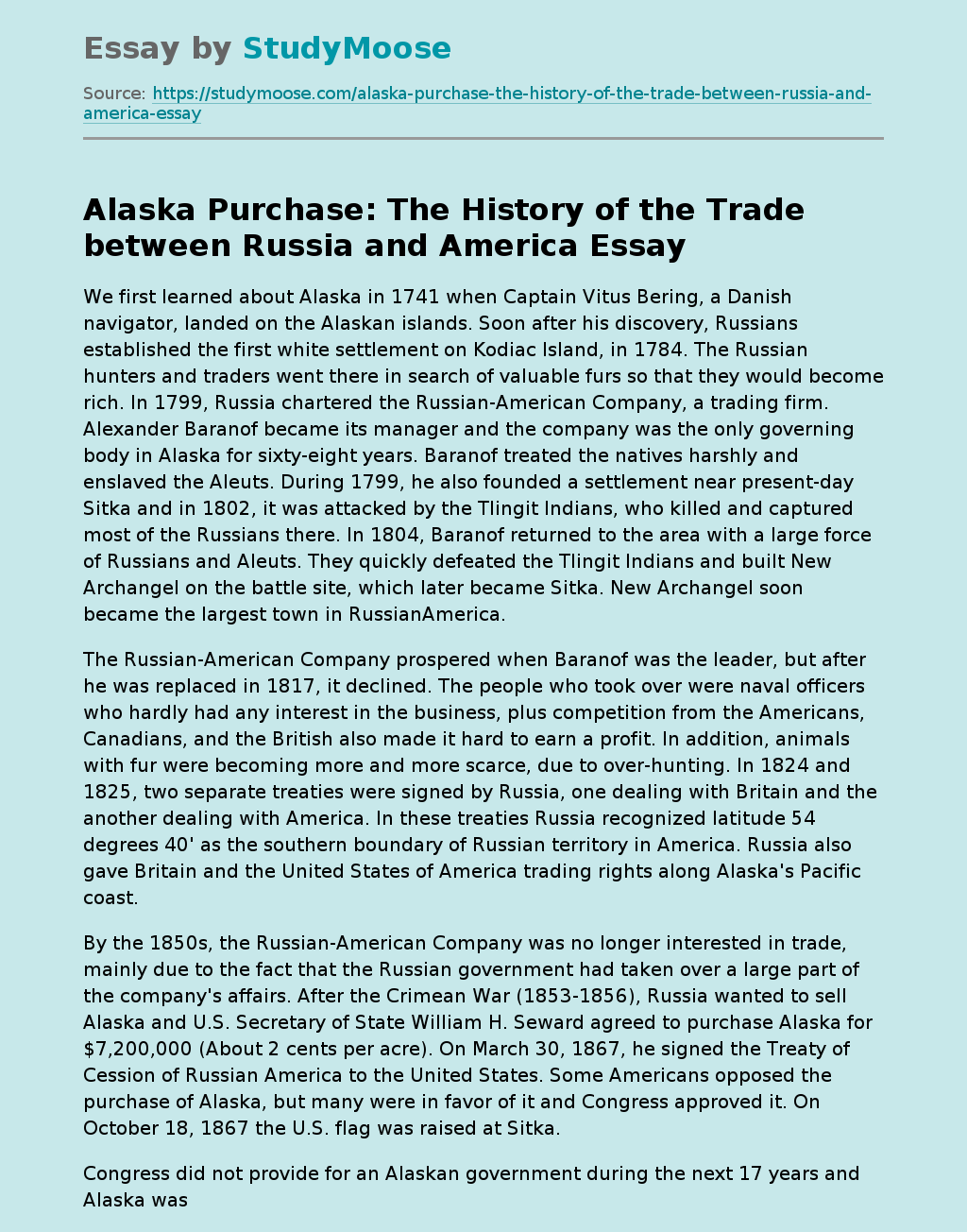