Don't use plagiarized sources.
Get Your Custom Essay on “Ah, Are You Digging My Grave” by Thomas Hardy Just from $13,9/Page

Another musical quality of this poem is that there is a refrain: “Ah, Are You Digging On My Grave?”

In the second line, when the woman asks if the one digging is her “loved one? — planting rue?” the word ’rue’ is a double entendre. Rue is a shrub that symbolizes sorrow, so the corpse is really asking her loved one both if he is planting flowers on her grave and if he is feeling sorrow about her death.

When the woman’s kin say “No tendance of her mound can loose/ Her spirit from Death’s gin” they are referring to a gin as in a type of snare or trap used to catch animals. There is synecdoche in the phrases “the brightest wealth has bred” in the first stanza and “one true heart was left behind” in the fifth stanza. This poem also uses a lot of irony.

The woman-corpse wants to believe that her former acquaintances remember her and are affected by her death, but she continually finds out that the opposite is true: they have little concern for her now that she is dead. Hardy uses personification with the corpse and the dog. He gives them human traits like the ability to speak and feel emotions. When the dog is burying a bone on his dead mistress’s grave, it symbolizes how the people she knew while she was alive now view her. To them, she is just a bunch of bones buried in the ground, and no longer of any importance.

The central theme of this poem is that no love or hate outlasts death. There is a lot of disappointment in the poem, depicting death and the afterlife as tragic things. The black humor and irony reveals a sad message: the dead woman is forgotten and eternally lonely. The poem is also satiric, mocking the sentimentalism of continual devotion to the dead. Hardy takes a similar stance as the Feste in Twelfth Night.

“Ah, Are You Digging My Grave” by Thomas Hardy. (2016, Jun 06). Retrieved from https://studymoose.com/ah-are-you-digging-my-grave-by-thomas-hardy-essay 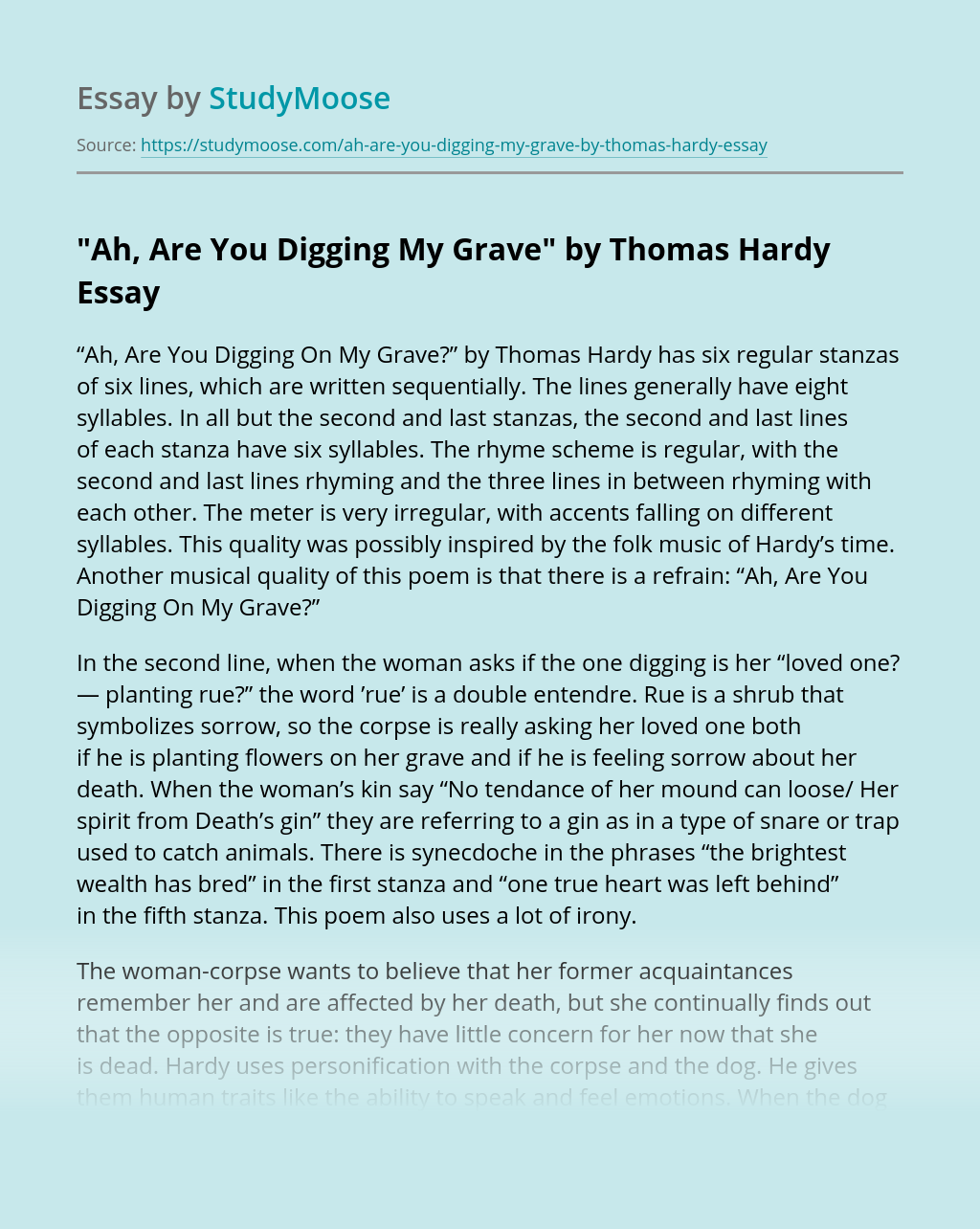 Synopsis Steve Harvey got his start in stand-up comedy, which led to TV roles such as host of Showtime at the Apollo and the star of a WB sitcom. He was one of the four comedians featured in the Spike Lee Film The Original Kings of Comedy. He now hosts a syndicated radio show and...

“Midway through the journey of our life, I found/myself in a dark wood, for I had strayed/from the straight pathway to this tangled ground.” These famous lines from Dante’s Inferno signify the themes of religion and personal salvation in the poem. Often when one embarks on a journey of self-discovery, they travel to places which...

Get Essay
Couplings and Friends Comparison

The show had low ratings, but its popularity soon increased and by the end of the third series the show had achieved decent ratings in the UK. It also aired in BBC America and surprisingly had a little success. Friends is an American sitcom created by David Crane and Marta Kauffman, which aired on NBC...

Elements of Irony in Native Son Native Son paints a disturbing, harsh picture of life within the “Black Belt” of Chicago in the 1940s. Wright uses irony; sometimes subtly and at other times obviously to shape the view of the reader and as a foreshadowing mechanism. From our initial scene to Bigger’s death, the technique...

Reflection Students Can Improve by Studying their Learning Processes Before I started my student-teaching at the UBHS, I listed down some of my observations with the Grade 8 students like their strengths and weaknesses. This is why I formulated my goals and objectives that I need to achieve in order to address these concerns when...