Affirmative action at the work place

Affirmative action is a concept used as a justice seeking tool comprising of policies to address intimidating aspects of a non dominant or minor group. Such groups include women, minority men and physically disabled people. Affirmative action increases these groups access to facilities such as employment and education. The motivation for affirmative action comes in times when a perception or actual negative aspect towards a certain group is experienced, but illegal according to legislative bodies. It is also applied in learning and service delivery institutions such as police forces, hospitals or universities to motivate them to act more responsibly to the people they represent.

Don't use plagiarized sources. Get your custom essay on
“ Affirmative action at the work place ”
Get custom paper
NEW! smart matching with writer

According to Bulman (2006), affirmative action at the work place is a concept that should be applied in all departments. This is because many working places are characterized by cultural, social and political diversity (p.45). This is to say that people come from different communities, races, religions, political backgrounds, gender, national origins, and age, physical and mental health capabilities.

This calls for affirmative action to fight for the weak mass within the working place, as these upgrades the workforce diversity. Racial and gender based discrimination in a working environment comes in the areas of granting jobs, in promotional programs and admission to institutions causing unfairness and inhumanity aspects in the working environment. Affirmative action in an employment environment illustrates both the prescriptive indicators and double edge quality in working together. Strong form of affirmative action should be the abolishment of race and sex consciousness in the times of hiring, promotion and in layoff preferences.

The need and essentiality of constructing integrated society in the workplace is to develop a forward looking and pragmatic staff. The diversity bestowed on company employees signifies diversity in its location and therefore employers need a law to govern them for maintenance of the diversity. The ideology of preferences among equally qualified applicants has a negative perception at this time when diversity is so widely acknowledged.

The support extended to workplace diversity leaves open both questions of means and ends. Enhancement of affirmative action can literally be done through encouraging application from disadvantaged groups during recruitment programs. As a result, some preferences may be extended to the groups perceived to be underrepresented. Affirmative action should be mostly adopted by government organizations for they are highly affected by discrimination along ethnicity and gender lines (Loury, 2003, p.13).

Adoption of this will make state parties to diminish or eliminate situations which help in perpetuating discrimination. For the government to assist implementation of this, each company should be given some legal minimum requirements to comply, in the area of representation by the disadvantaged groups in their various departments of work.

The matters of concern that should be addressed are equity ownership, representation within management, employee level up to board of directors level, procurement of businesses and other several social investment programs. Affirmative action prevents discrimination in lines with hiring bias, promotion, job assignment, compensation, retaliation and all sorts of harassments.

Work place is a unique and important site for development of corporative and social ties of different groups. It has of late become the centre for corporation, socialization, and solidarity, which emerge as primary features of human psychology. This has also been tightened by affirmative action move, which has promoted equity in opportunity and demographic heterogeneity and the imposition of rudimentary virtues of freedom of association and communication (Mellot, 2006, p.7).

The conventionality in the diversity argument hardly spins the value of demographic based on heterogeneity and is mostly made to ensure work place integration. The process of affirmative action thus starts with pooling different people of different identities and backgrounds together. Different experiences and attitudes thought to correspond to demographic variations in the work place are eroded easily, thus emphasizing on common ground and connectedness across the difference lines. In places where many people live and work together elements like friction in decision making, turnover and dissatisfaction are eminent.

The challenge is devising the ways and means to ameliorate the emerging tensions. In the employment context, workers should be protected equally and completely rule out employment abuses such as unequal treatment of treating employees, job applicants and former employees due to differences in a group membership. Employers have to take care of pregnant mothers or related medical conditions. It is against affirmative action move to discriminate workers in lines of discharging, hiring, compensating, terms provision, conditions and employment related privileges (Mellot, 2006, p. 9).

From societal point of it, the employees form a part of society. They have to take that as their own community, live in it and a system of governance should exist within. Application of many cooperative interracial interactions in the workplace ensures the living together and governance. Because of the diversity brought in by the globalization process, interactions that lead to reasonable and controllable frictions should be allowed to pave way to brainstorming and creativity. From the societal calculus, the side of the employer is less considered.

Affirmative action at the work place. (2018, Nov 09). Retrieved from https://studymoose.com/affirmative-action-at-the-work-place-essay 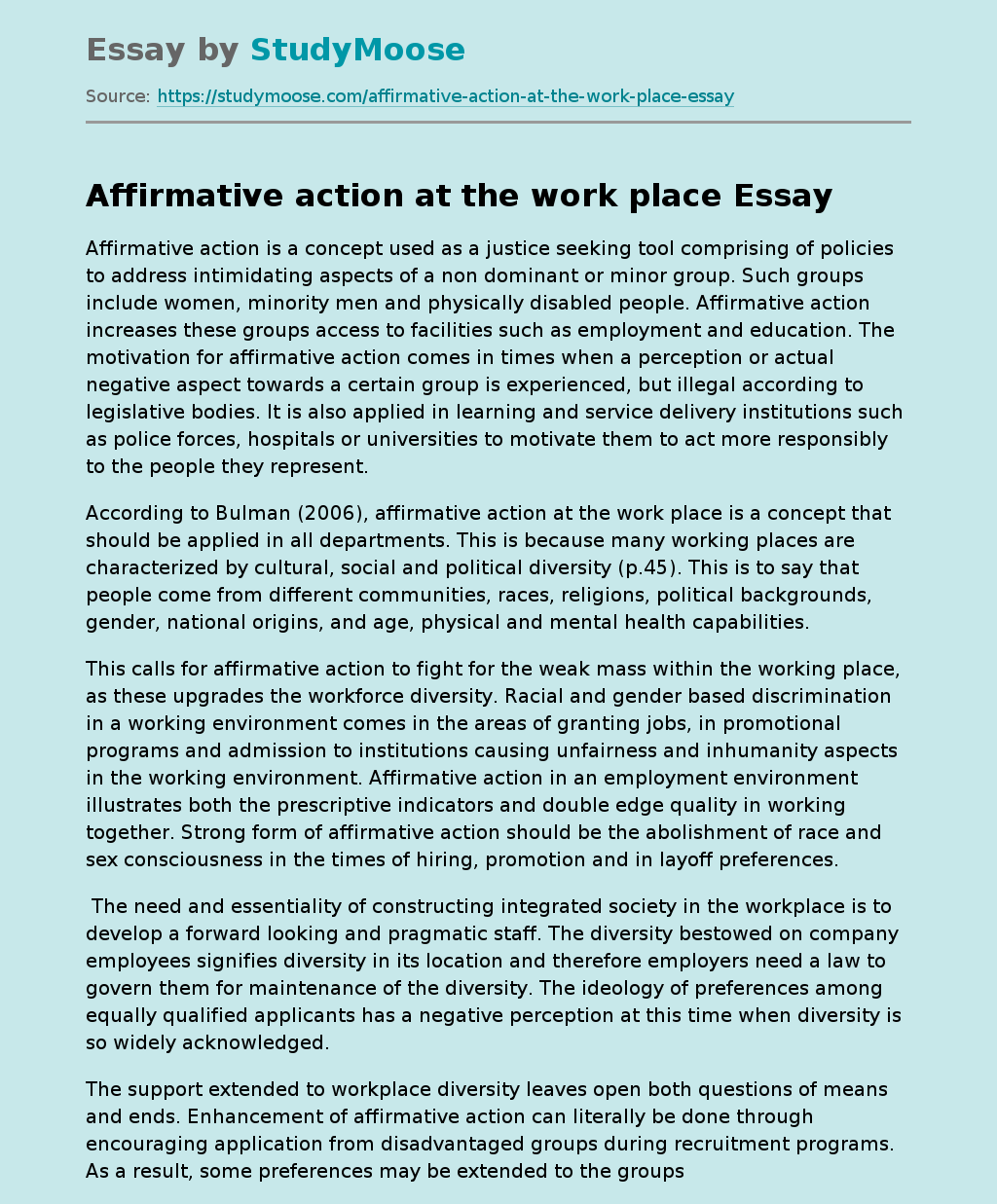