Calculators are a way of doing mathematical equations when used correctly. They are also a useful tool in learning mathematics. The use of calculators have only had part in the benefit of education, and with widespread availability, a full range of sizes, and a price range for any budget there should be no excuse not to own a calculator or restrict the use of calculators. Current issues with calculators have to be dealt with in order to better understand the advantage of this technology, which is the intention of this paper.

Don't use plagiarized sources.
Get Your Custom Essay on Advantages of Calculators Just from $13,9/Page

Calculators should be utilized more often not only because current myths block how beneficial calculators really are but also because they create a more efficient student and easily integrated because of size and price.

Current myths about calculators are only slowing the process of the addition of calculators, which are placing students away from the real world where we are already wrapped in technology.

Tests have proven calculators are useful for means of learning but because of false information, some educators and others still believe they are harmful. It is imperative that these myths be dealt with so that the truth will be known.

One myth is that calculators are used because the students are too lazy to do the computations while the calculators to do all the work. This is absolutely not true the real understanding is to comprehend what the question is asking, knowing how to set up the problem and deciding if the answer makes sense. Calculators only help the student in the calculations and give more time to understand instead of doing tedious work that is sometimes involved in problems.

The second myth is that people will become so dependent on calculators that when without one they would be helpless. It is very important that mental and paper and pencil calculations be taught. The truth is that calculators are more accurate and efficient than humans and that they are inexpensive and portable enough that they can be brought most anywhere. Even with all the advantages calculators have they will never be able to replace the human mind when knowing how to read or understand the situation of a problem. Calculators are only as effective as the information entered in to them. (Texas Instruments 1997)

Thirdly, people believe that since calculator technology wasn’t around when they were taught and they turned out fine, the new generation doesn’t need to gasp these new opportunities. Since calculators didn’t exist generations ago problems had to be written out with pencil and paper which was very long and tedious work. Some methods of the past may now be obsolete but because of technology many more students are able to explore further in to more complex areas of math. Most people who have issues against technology usually have a fear of the unknown. (Hendrie 1992) Preventing students from using calculators is like governing the power on an engine. Stopping it from reaching its fullest potential.

The efficiency of a student can be critically changed when making use of even the most basic type of calculator. And with the world rapidly moving towards the direction of technology, calculators familiarize students with it, giving them a comfort level to it and an advantage over others how haven’t had the exposure to such technology. Such exposure will make more students open or willing to try other new types technology. Employers want employees who can solve problems efficiently, using technology when and if applicable.

The use of calculators make a more accurate, faster, and better student overall. Using calculators allows students to concentrate directly on the structure of the problem and what steps to take within. Calculators simply take out the small, time-consuming parts of an equation giving the student more time to work on the “heart” of the problem and to better understand it. Paper- and- pencil work is inconvenient and calculators are simply are better when compared. (Ohio State University 1997)

The use of calculators speeds the learning process ridding of less significant and time consuming parts that have been taught already so students are able to cover more areas. It is important that students spend less time on topics since the calculator makes old techniques obsolete. (Ohio State University 1998) Educators have finally realized that mathematical concepts in learning new things are more important than spending endless hours doing pencil-and-paper work doing the same basic problems since it was first learned. Students today are learning more and learning faster than students in the past. This is obviously has happened since the implementation of calculators in classrooms and has occurred because of calculators. Realizing the amazing results in calculators in education some schools now have even have calculators as a requirement. (The Record 1993)

Overall calculators have given new light to students in the world of mathematics. Calculators are already a much part of the emerging requirements of math instruction. And they give a better attitude towards math itself and better self-concept of it. This will allow students interest in math to prolong and either explore further by taking more advanced classes or at least leave the student with a live long appreciation for math. (Hembree and Dessart 1992)

America has always had a rich history in adapting to new technologies in many areas. The world has undergone an immense change over the years because of advances in technology and the willingness to use it. Calculators, like other technologies can be easily implemented into places such as the classroom as well as students’ lives. The average income family or person should have no problem when acquiring such technology because of its availability and price. Calculators are seen and used daily by the majority.

Sizes can be made convenient varying from larger hand-held graphing calculators to wallet size or even business card size calculators that can be forgotten about when in your pocket. Some calculators are even given away as business cards. Prices have dropped from the sky from the first calculators because of popularity and advances in integrated circuit technology making the price barrier nearly non-existent. With such prices and advantages who can’t afford to own a calculator.

Mathematics has grown substantially in the past years as well as the tools to aid students in mathematics, which includes calculators. And today math is a subject that all students should understand and learn to appreciate and rejecting the aid of a calculator is only limiting your outcome of apprehension of mathematics. The abundance of calculators today is material prove that myths of calculators are false because of current widespread acceptance. Fusing technology with education is only to advance our well being. Take advantage and make yourself more capable of achievements to may be impossible without calculators. 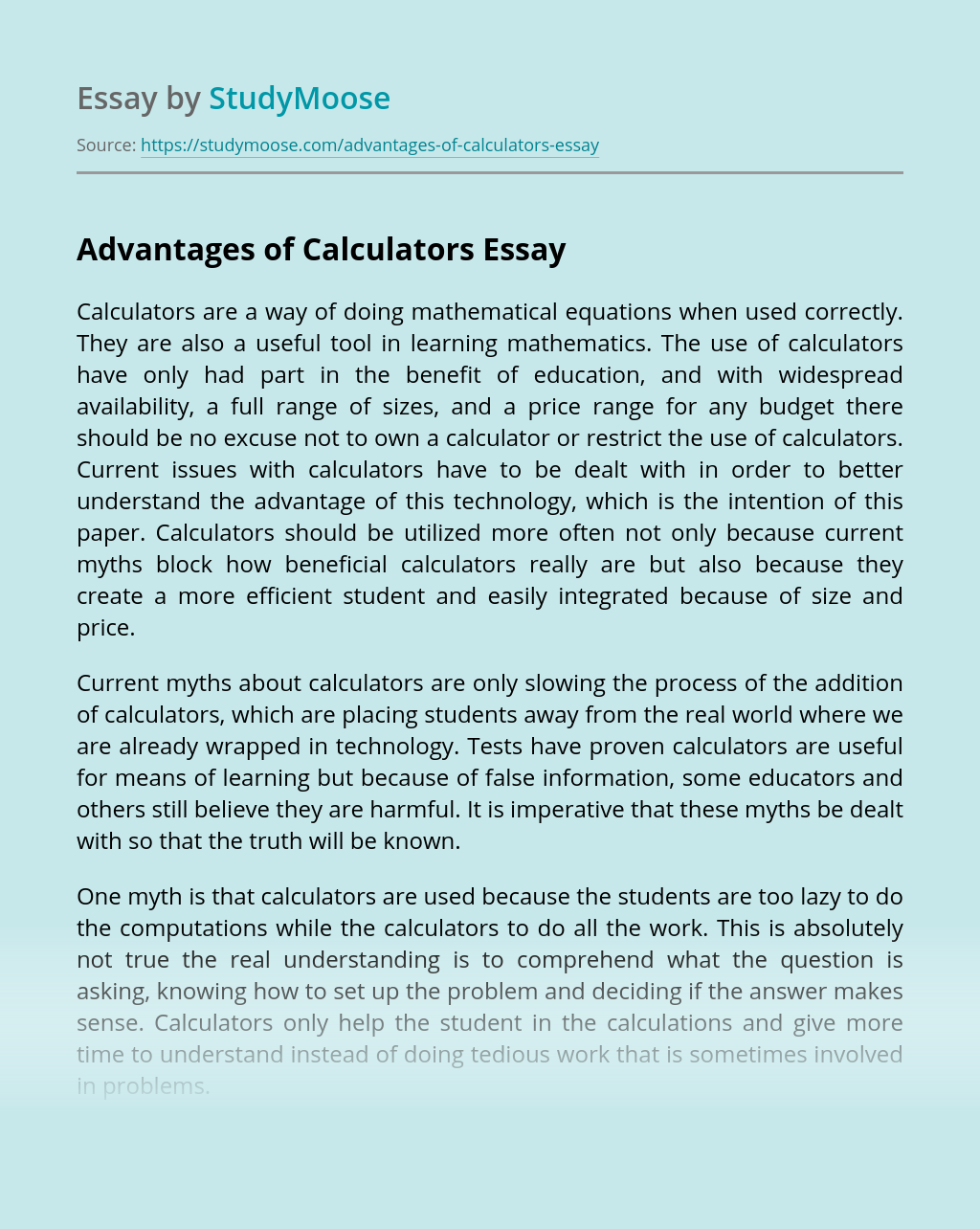 Rate this post Hotel Billing System is made to ease the billing system of Hotel businesses. There are a lot of big hotels that are very modern, but there are still small hotels that uses manually in calculating their billings. These systems help them that even they are in small business they can afford to...

Rate this post Katherine Okikiolu comes from a mathematical family, her father is a mathematician and inventor and her mother is a high school mathematics teacher. Her parents met when her father left Nigeria to study mathematics at the same college in England where her mother was studying physics. Her father, the Nigerian George Okikiolu,...

Get Essay
The Pythagorean Theorem

Rate this post In the world of mathematics, the Pythagorean Theorem is one of the most popular theorems and is widely applied in many problems and applications because of its basic and simple concept. It is a relation in Euclidean geometry relating the three sides of a right triangle. The theorem is named after the...

Rate this post Geometry was throughly organized in about 300 B. C, when the Greek mathematician, Euclid gathered what was known at the time; added original book of his ownand arranged 465 propositions into 13 books called Elements. Geometry is the mathematics of space and shape, which is the basis of all things that exist....

Rate this post Complex numbers are the subsets of the set of the real numbers and the set of the imaginary numbers. It is expressed in the form of a+bi. I have chosen this topic as this itself speaks about complex and I have taken this as a challenge as I got always less marks...

Rate this post Year Level: 1 Title of experience or the focus question: Skip-Counting by twos Outcomes Australian Curriculum Content Descriptor At the completion of this lesson, students will be able to skip count by twos to 100 [ACMNA012] (Australian Curriculum, Assessment and Reporting Authority [ACARA], 2019b) Achievement Standard By the end of Year 1...

Rate this post Market Basket Analysis is one of the key systems utilized by vast retailers to reveal relationship between things. It works by searching for blends of things that happen together as often as possible in exchanges. To put it another way, it enables retailers to distinguish connections between the things that individuals purchase....