According to National Institute of Mental Health, obsessive-compulsive disorder (OCD) is a disorder in which it is very common for a person to experience unmanageable thoughts and/or behaviors that he or she feels a persistent urge to repeat over and over. People with obsessive-compulsive disorder may have symptoms of obsessions, compulsions, or both. Obsessions are known as having repeated thoughts, images and/or urges that provoke anxiety. Compulsions are an irresistible persistent impulse to do something repeatedly that is in response to an obsessive thought.

Don't use plagiarized sources. Get your custom essay on
“ According to National Institute of Mental Health obsessivecompulsive disorder OCD is a ”
Get custom paper
NEW! smart matching with writer

OCD symptoms can impact an individual’s life in every aspect, such as school, work, as well as their relationships. In hopes to gain a better understanding of this particular disorder this paper is going to explore what genetic factors have been identified in the development or maintenance of OCD, as well as discuss the environmental factors. Lastly, I will share my personal thoughts on how Christians might approach the issue of anxiety and/or OCD and how they can provide support for those who are suffering.

Genetic Factors of Obsessive-Compulsive DisorderSuffers of OCD understand that these obsessions are constant repeated thoughts, images and/or impulses that are ego-dystonic; that is, they are not experienced as voluntarily produced, but rather as thoughts that invade our consciousness and are experienced as senseless or repugnant (Turner, Beidel, & Nathan, 1985). Those with OCD can attempt to ignore and/or suppress their compulsions but they can’t. Are these obsessions and compulsions due to genetic or biological factors? According to the article Genetics of Obsessive-Compulsive Disorder and Related Disorders, there has been numerous studies done on twins and families that support the idea that genetics does contribute to obsessive-compulsive disorder (Browne, Gair, Scharf, & Grice, 2014).

Twin and family studies as well as newer population-based approaches and novel laboratory-based investigations have provided powerful insights into the substantial heritability in OCD and related disorders, supporting a significant genetic contribution to these disorders (Browne et al., 2014). Philip K. McGuire, (1995) claims that it has been observed that the fronto-cingulate and striatal areas in the brain, and serotonergic transmission are associated with the pathogenesis of obsessive-compulsive disorder. This challenges the traditional perspective on obsessive-compulsive disorder, which has generally been regarded as a neurotic condition, with the implication that biological factors play a minor role in its pathogenesis (McGuire, 1995). According to Turner et al., (1995) it is clear that we are not at a point where an integrated biological theory of OCD can be proposed, even though the findings consistently suggest that biological factors are correlated with OCD. From the findings found within the studies it would be premature to state that OCD is strictly a biological abnormality. If biological and psychological factors are equally important in the etiology of obsessive-compulsive disorder, where does environmental factors fall into the equation and what role does it play in OCD?Environmental Factors of Obsessive-Compulsive DisorderPossible environmental risk factors for OCD have been established in the broad areas of perinatal complications, reproductive cycle, and stressful life events (Brander, Perez-Vigil, Larsson & Mataix-Cols, 2016). According to Brander et al., (2016) there has been limited proof regarding other potential risk factors, such as age of parents, socioeconomic status, parental rearing practices, substance use and vitamin deficiency. At this time there are no environmental risk factors that have convincingly been associated with OCD. We propose a roadmap for future studies, consisting of longitudinal, population-based research, employing quasi-experimental family and twin designs to identify risk factors that are not only associated with the disorder but also contribute to its causation either directly or moderating the effect of genes (Brander et al., 2016). It seems as if very little is known about environmental triggers for OCD. Further, some factors that were previously considered to be purely environmental are now considered to have a heritable component, such as family life, parent”child interaction, divorce, and life events (Grisham, Anderson & Sachdev, 2008). Like most psychiatric disorders, OCD is a complicated disease, it is possible that environmental and genetic factors are both likely to be included in its pathogenetic mechanisms (Grisham et al., 2008). It seems as if there is important evidence that shows us that genetic factors can increase a person’s sensitivity to OCD, the specic cause of this sensitivity is still unclear but it is important that we gain a better understanding of how genetic and environmental factors interact in the development of OCD. Reflection and Faith Integration.According to Grisham et al., (2008) OCD affects approximately 1″3% of adults and know to be one of the ten most disabling medical conditions ranked by the World Health Organization. Regardless whether it is genetics or environmental factors are the cause of this disease, it is definitely a debilitating condition that impacts the lives of individuals. I believe it is important to explore the circumstances that contribute to the disease for each person in order to find the best way to help the individual suffering from OCD. Anyone who suffers with OCD or knows someone that does you need to remember that OCD does not and should not define those impacts by the disease. I believe Christians should approach the issue of OCD with sensitive and understanding that these individuals are suffering. Peace I leave with you, my peace I give unto you: not as the world giveth, give I unto you. Let not your heart be troubled, neither let it be afraid (John 14:27).

According to National Institute of Mental Health obsessivecompulsive disorder OCD is a. (2019, Aug 20). Retrieved from http://studymoose.com/according-to-national-institute-of-mental-health-obsessivecompulsive-disorder-ocd-is-a-essay 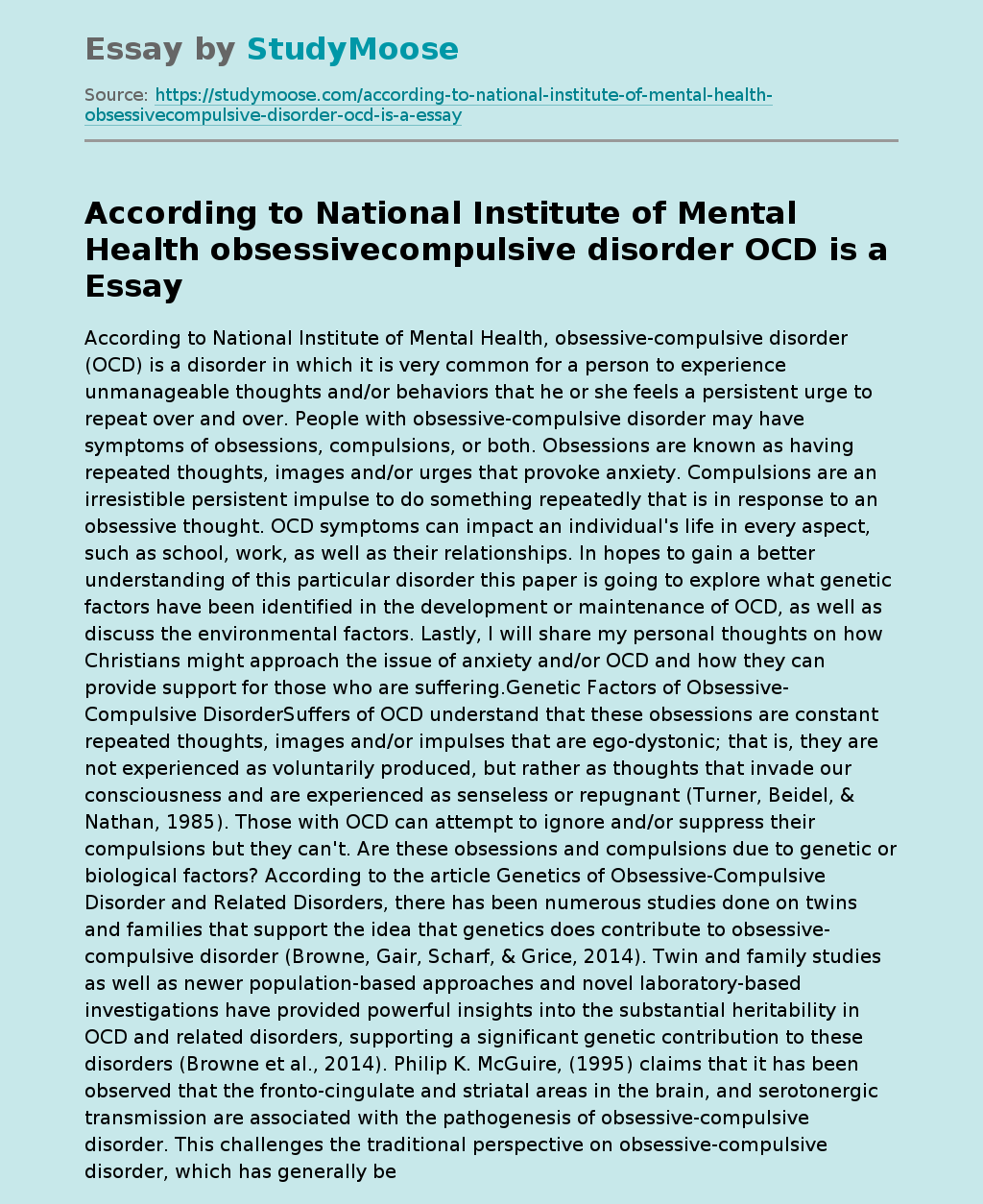