About Criminal Homicide In Society

Criminal homicide is the most severe form of homicide and is considered one of the most serious crimes in society. This kind of homicide consists of unlawful conduct and malicious intent on the part of the killer. Murder is one form of homicide and is the most serious type. The crime of murder itself may seem straight forward but the laws surrounding the crime are intricate and entail a precise set of circumstances to institute the components of the murder. Murder is defined as “the purposeful, knowing, or reckless unlawful killing of another human being.

” It has two separate components: The suspect must have acted with the required specific intent to kill and the suspect’s behavior must have caused the death of another human being. Many states use different terms to define intent or mens rea. Pennsylvania uses the terms lying in wait, willful, deliberate or premeditated to institute the required specific intent (Wallace & Roberson, 2012).

The second component entails a death as an outcome of the suspect’s acts or failure to act and any conduct will meet the requirements.

There are also different degrees of murder including first-degree, second-degree and manslaughter. These different degrees of murder depend on the purpose behind the killing and the way the killing is committed. The specific definition of each degree depends on the state or country that the crime is committed in. First-degree murder is different from the other two types of murder because it is planned. Normally, first-degree murder is a criminal offense involving intent, homicides that are planned, or homicides that occur during the commission of another felony.

For example, a person who commits a killing in a fit of rage or a person who is motivated to kill by receiving insults or physical abuse, are likely to be charged with second-degree murder. But the act of killing must happen instantly after the fit of rage or insults because if time lapses between the two than it permits the chance for thought to occur which would turn into premeditation and therefore become first-degree murder. Defenses against second-degree murder include actual innocence, insanity, and self-defense. Third-degree murder or manslaughter is different from the other degrees because it refers to homicides that result from someone’s action that is unlawful or negligent. Other names for third-degree murder include negligent homicide, negligent manslaughter, or involuntary manslaughter. Manslaughter is a less serious crime than first or second degree murder because it involves carelessness and not purposeful killing. An example of manslaughter is a drunk driver who causes a fatal accident can be charged with vehicular manslaughter. Defenses against manslaughter include actual innocence, accidental killing and intoxication.

About Criminal Homicide In Society. (2016, Mar 22). Retrieved from http://studymoose.com/about-criminal-homicide-in-society-essay 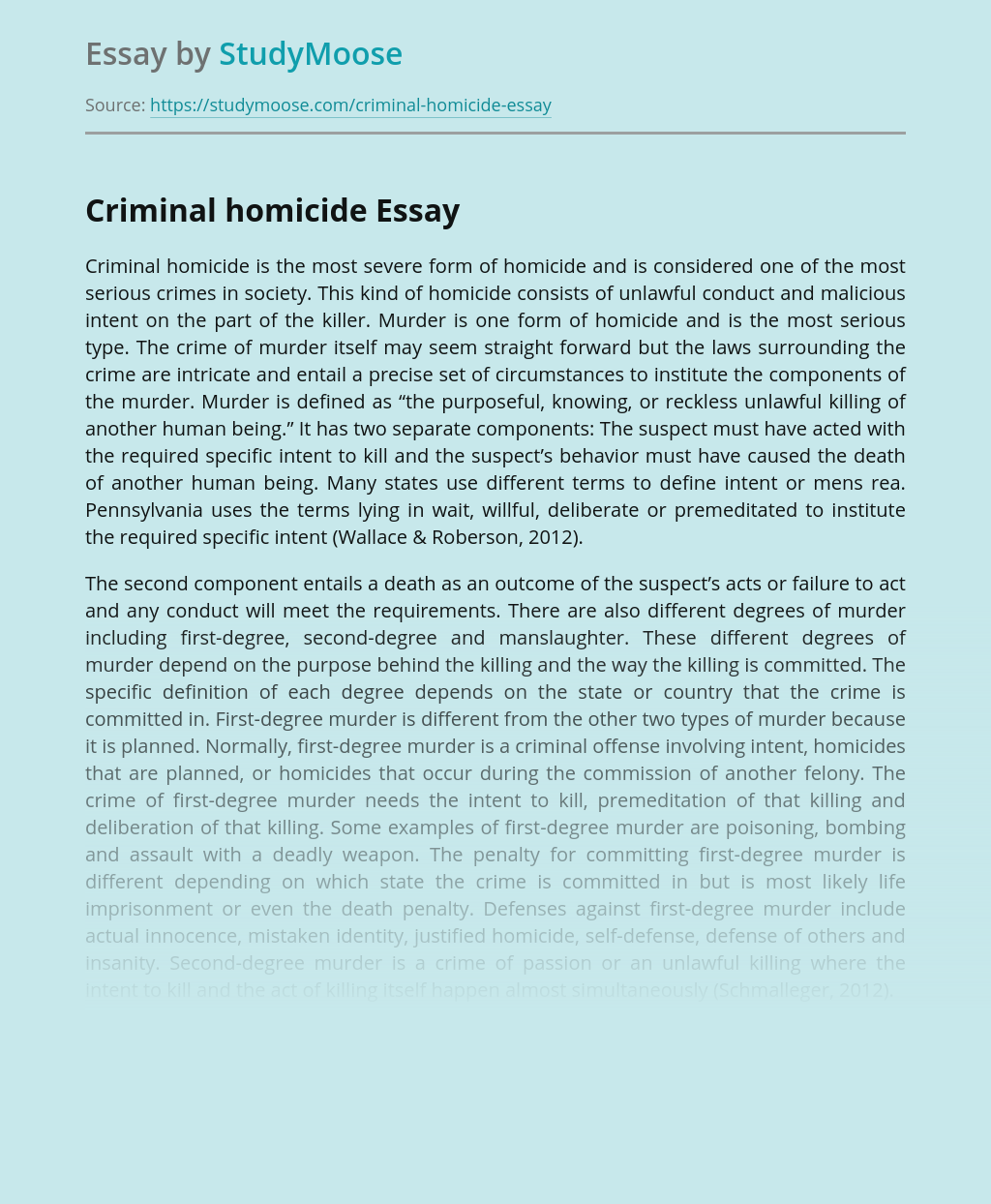 Don’t waste time
Get a verified expert to help you with About Criminal Homicide In Society
Hire verified expert
$35.80 for a 2-page paper
Stay Safe, Stay Original