Criminal Liability Due to Law in Zambia

In law there is a fundamental principle which is guaranteed by the constitution that every person is innocent until proven to be guilty by the courts of law, in criminal law there are two principles of criminal liability which have to be relied upon in order to determine the guilt or innocence of the accused person. Therefore the aim of this essay is to discuss the two principles of law for criminal liability with reference to the Penal Code Act, Chapter Eighty Seven (87) of the Laws of Zambia and Zambian decided cases.

Don't use plagiarized sources.
Get Your Custom Essay on Criminal Liability Due to Law in Zambia Just from $13,9/Page

In order to effectively do this, the essay will begin by generally talking about the two principles of law for criminal liability which are the “Actus reus” and the “mens rea” and in order to critically discuss them, focus will be made on the Homicide offence of ‘murder’ with the use of relevant Zambian cases. The terms ‘Actus reus’ and ‘Mens rea’ are derived from the Latin Maxim; “Actus non facit reum mens sit rea” which mean that there cannot be such a thing as legal guilt where there is no moral guilt.

In order for a person to be criminally liable it has to be proved by the prosecution beyond reasonable doubt that such a person had committed the required guilty act or ‘actus reus’ which is the physical element and had the necessary mental state or ‘mens rea’ although this is not always the case as some criminal offences do not require the ‘mens rea’ for liability to be established.

Some of the cases which do not require establishment of the ‘mens rea’ are offences referred to as “offences of strict liability”. In Patel’s Bazaar limited v The People4 it was stated that proof of the ‘mens rea’ is not necessary to establish a strict liability offence, this was a case in which the accused was convicted for the strict liability offence of selling unwholesome bread. Generally speaking in criminal law in order to establish criminal liability certain elements of the crime alleged to have been committed must be identified, the first being the conduct prohibited or ‘actus reus’, secondly the state of mind or fault element which is required when defining the crime in question also referred to as ‘mens rea’ and thirdly proof of lack of a defence which might vitiate any of the two principles of criminal liability. As earlier alluded to, for the purposes of this assignment focus will be put on the homicide offence of Murder in trying to discuss these two principles of law of criminal liability.

To establish the ‘actus reus’ of murder it has to be proved that there is unlawful killing of a person, the death following within a day and a year of the infliction of the fatal injury, this is evident in Section 200 of our Penal Code Act 6 which provides; Any person who of malice aforethought causes the death of another person by an unlawful act or omission is guilty of murder. In this section the ‘actus reus’ is identified as causing death of another person by an unlawful act or omission and the ‘mens rea’ is the malice aforethought. In Chitenge v The People it was held that the actus reus of murder is that there is a dead body, in this case the appellant having had fought with his friend went to the friend’s house and set it on fire burning a person that was inside leading to the death of that person. The dead burnt body sufficed as ‘actus reus’ despite the defendant not actually having had checked as to whether there was a person in the house or not. Coming to the ‘mens rea’, the requirement is that the accused person must have malice aforethought. The term malice aforethought is used to describe the mens rea of murder and it simply means that the mens rea must not come as an afterthought. In the case of Mbomena Moola v the people, the appellant was convicted of murder of his father after he poisoned his maheu drink.

In his confession the appellant stated that he poisoned his father so that he could die because he believed that he was the one who bewitched his children. In this case the courts held that it was quiet clear that the accused had the necessary mens rea for murder as he expressly intended on causing death of his victim. Taking into consideration the facts given in the question where the accused is charged with murder in which the mens rea is that the accused must be malice aforethought and the actus reus being the death which is satisfactory in this case, it is worth noting that where offences complained of happened during participation in a sport, the accused cannot be held to be criminally liable as in law it is believed that when participants to a sporting game give consent they do so to all the risks of injury that may take place as a result of accidents that may take place during the sport including death.

Therefore applying the two principles of law of criminal liability to the given facts it can be stated that though the actus reus was present, that is the death of Mr Mudenda, Mr Chisolo lacked the necessary mens rea to be convicted for murder and can also not be convicted of manslaughter due to the fact that the death or actus reus was as a result of an accident in a sport of which consent by the participants vitiates criminal liability. In conclusion it can be stated that this essay has identified two principles of law of criminal liability which are the ‘actus reus’ and the ‘mens rea’. It has being discussed that the ‘actus reus’ refers to whatever act or omission or state of affairs as laid down in the definition of the particular crime charged in addition to any surrounding circumstances and an example was given in the offence of murder. The ‘mens rea’ with reference to murder was also discussed as the state of mind or fault which is required in the definition of the crime in question and that criminal liability cannot be inferred if the offence complained of took place during the occurrence of a sport as consent vitiates it.

STATUTES
The Penal Code Act, Chapter 87 of the laws of Zambia.

Criminal Liability Due to Law in Zambia. (2016, Mar 11). Retrieved from https://studymoose.com/criminal-liability-due-to-law-in-zambia-essay 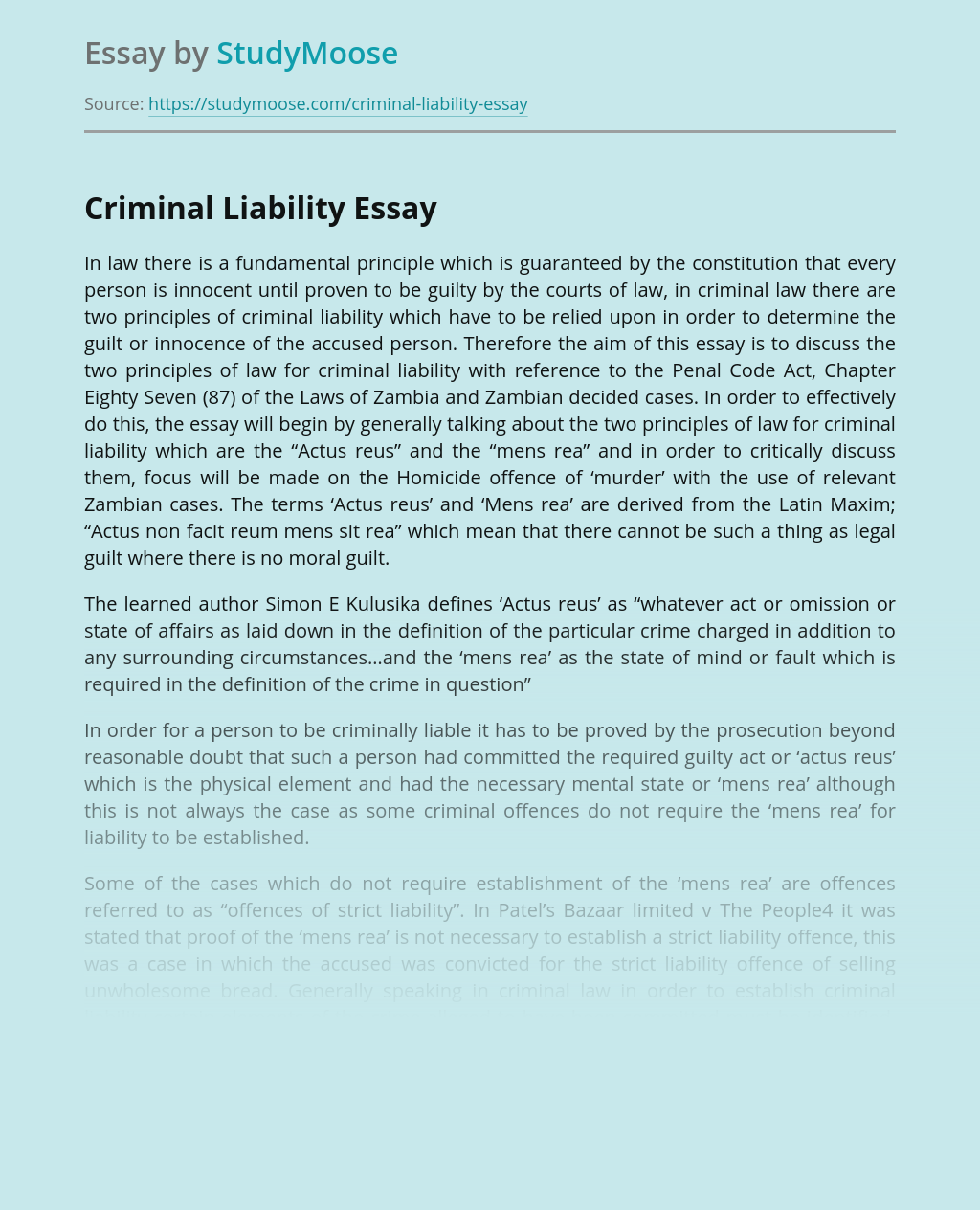 Manslaughter is a crime that is unjustified, inexcusable, and the intentional killing of a human being, whether it be involuntary or voluntary. This is the criminal charge that Adrian Crump from Jacksonville, Florida had to face. He shot a 15-year-old boy, around 2 in the morning, who was driving around shooting rocks from a slingshot....

Kelly was twelve when his father died, and he was subsequently required to leave school to take on the new position as head of the family. Shortly after this, the Kellys moved to Glenrowan. As a teenager, Ned became involved in petty crimes, regularly targeting the wealthy landowners. The story goes that Ned Kelly was...

A crime is a serious offense against the public law (Webster Dictionary), but not all serious crimes have a clear victim. Victimless crimes, legal offenses to which all parties consent and no parties are injured, however, account for 86% of the Federal Prison population (Libertarian News). For the reason that the illegal activity is consensually...

What To Do When Wrongfully Accused Of A Crime

Anyone who has been wrongfully accused of doing something they know they did not do will understand the immense frustration that comes with it. Fortunately for most people, that boils down to someone saying they took the last donut or let slip a bit of gas. Unfortunately for others, it involves horrible crimes that lead...

Sentencing The criminal justice system has many important aspects within, the most important one is sentencing. Sentencing is the imposition of a penalty on a person convicted of a crime. (Schmalleger, 2011) This decision is determined in judicial proceedings by judges and in some cases juries may be involved. In the following paragraphs the philosophical...