A Woman Worth Admiring for Her Character

Ms. Molinna Nguyen, a 55 years old lady came is from Vietnam. She is a strong, hard-working, intelligent woman, who is not afraid to tell what she is really thinking. She is 5 feet in height with long black hair and black eyes. She was one of my admired women from all the people I have known. I have known her since I was 16 years old.

I asked her, “Which job was the most interesting and why?”

She was quiet for several minutes and then said, “I used to travel the United States and Canada installing computers in hotels and training the hotel staff on the computer systems.

Don't use plagiarized sources. Get your custom essay on
“ A Woman Worth Admiring for Her Character ”
Get custom paper
NEW! smart matching with writer

This job provided the opportunity to travel, see new places, meet new people; and I got paid for it at the same time.” This was a great opportunity for a farm girl from Cambodia. Who would have thought that a girl from a small city who had not taken a computer class and a management class or traveled more than 200 miles from home would be doing that for a living?

Then she went on to tell me several stories about her experiences while traveling.

Proficient in: Person You Admire The Most

One of them was being able to watch the Macy’s Day Thanksgiving Day Parade from her hotel room while in her pajamas. “It seemed like you could open the window and be able to touch the balloons.” She was sent to this hotel to help co-workers with a difficult installation. “My job was to get the hardware working. I was locked in a little room with a white-haired, German IBM rep who spoke broken English.

I promised him we weren’t leaving the room until we got the equipment working, and I would buy breakfast if I had to.”

Another time she told me of a trip to California, where she and a co-worker rented a convertible and drove up the coast to arrive at a property. Unfortunately, this was also the property where the manager of the hotel did not want to deal with a woman in charge. “The hotel manager wouldn’t speak to me or make any of the necessary decisions so we could customize the computer system. My company was adamant that I be the lead consultant on this trip.” After several days off, Molina called the hotel’s management company and was able to proceed with the installation.

Her most amusing trip, she told me, was to Florida to do an installation for Guest Quarters Hotel. Mom still doesn’t understand why she was sent to this property because “we were supposed to impress them and have a smooth installation so they would buy more systems for their hotels.” She missed the first flight to Florida and was booked on a later flight. She arrived at the airport in Florida and was greeted by someone that she thought was picking her up. They waited at the airport because they were to also pick someone else up.

The conversation was a little weird because he told her while she was there, the hotel would be interviewing her for a job. Molina didn’t think much about it; but when the other person’s flight arrived and they were all introduced, she realized that she was not the person they thought she was. Molina couldn’t believe she had spent two hours with a total stranger. “I didn’t know whether to go with them or tell them I was not who they thought I was.” She ended up telling them there was a definite case of mistaken identity. She called a cab and went to the right hotel. The next morning at breakfast, she had to explain to corporate personnel from Guest Quarters what had happened. She still smiles when she tells that story.

Molina has traveled to work in limousines and cabs. She has experienced Madri Gras, as well as Thanksgiving and Christmas in New York. She has been to Canada and required a translator. She has seen Niagra Falls and Hawaii. She was worked with many different people, some leaving quite an impression on her. And she had to adapt to resolve work issues. Compromises were learned and negotiated. Molina didn’t have typical workdays, as each day was different and usually in different locations. Her workdays were usually twelve hours long, and every two weeks she was traveling with a different co-worker. “They became my family.”

What Molinna’s adventures have taught me is that hard work is rewarded, and sometimes it’s necessary to keep a sense of humor. “You can be anything you want to be and to dream as big as the stars,” she said. Her stories are full of persistence, compromise, and striving for the best. She has always said, “Live your dream, and do it while you are young.”

A Woman Worth Admiring for Her Character. (2021, Dec 08). Retrieved from http://studymoose.com/a-woman-worth-admiring-for-her-character-essay 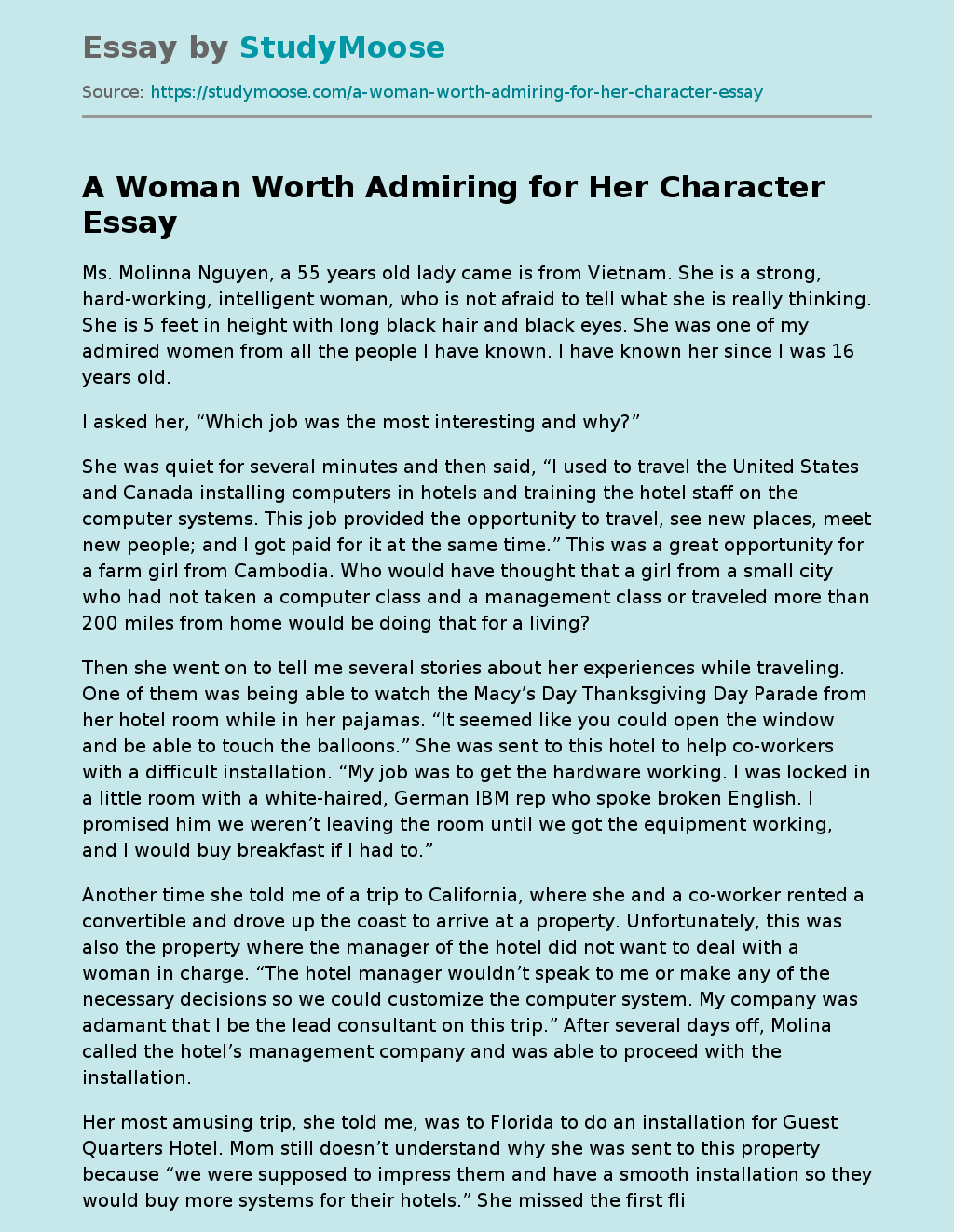