When Pelayo was coming back to his house, he found an old man face down in the mud, with a pair of enormous wings. The neighbor told them he was an angel, and must have been knocked down by the rain. In the short story, “A Very Old Man With Enormous Wings”, Gabriel García Márquez reveals some of his ideas of human nature. He shows how pessimistic humanity can be, through an experience with a fallen angel.

One portrayal found in the story was the idea of human greed and selfishness.

Don't use plagiarized sources. Get your custom essay on
“ “A Very Old Man With Enormous Wings” by Gabriel García Márquez ”
Get custom paper
NEW! smart matching with writer

Most people are interested in what is best for them, or how they can take advantage of something for their own good. In the story, the Pelayo and Elisenda, husband and wife, had an angel fall into their yard. At first they were going to put the angel on a raft and free him from their chicken coop prison. Instead, they decided to charge admission to see the fallen angel that they held captive in their courtyard (6).

Proficient in: A very old man with enormous wings

They knew that people would come from everywhere to see this spectacle, and took advantage of the situation.

By keeping this angel locked up in the chicken coop, they were profiting off of his misery. The people that came complained of their many problems, and were looking for the angel to help them. They were all concerned with themselves, and their own problems, rather than the angel’s well being. This selfishness is just part of human nature. The human race will always look for the best options to benefit themselves.

Humans seem to have a very short attention span. The smallest things can be amusing, and keep our attention, but generally only for a short time. The human race is always looking for the new best thing, whether it is the hippest fashions, the newest, fastest cars, or the top-of-the-line computers. In “A Very Old Man With Enormous Wings”, the people were amazed by the fact that a “flesh-and-blood angel” had fallen, and were coming from all over to see him. It was only after a period of a few weeks or so that a traveling circus came to town.

In this circus, there was a woman who was supposedly turned into a spider for disobeying her parents. The crowd lost interest in the angel and swarmed to see the spider lady (10). The people were interested in this angel for only a short period of time because something more interesting came to town. The whole idea that there was a fallen angel on earth became old news.

Humanity is, by nature, cruel. Again, going back to the angel and his imprisonment, it seemed as though people were upset or disappointed that the angel would not answer their questions. The whole imprisonment was cruel to begin with. At first, they even tried to feed the angel mothballs. Then, when everyone was dissatisfied with the angel merely lying around in the chicken coop, they decided to get him to move by burning his side with an iron, used for branding steers (9). For weeks they tormented this poor, hopeless angel.

Márquez, through his fiction, has shown some of his feelings on the philosophy of human nature. He feels that as a whole, is not very positive, and can be quite selfish. We tend to have a short attention span with many things, and we can also be very cruel. Human nature, as portrayed in “A Very Old Man With Enormous Wings”, is not as perfect and wonderful as many would like to believe. 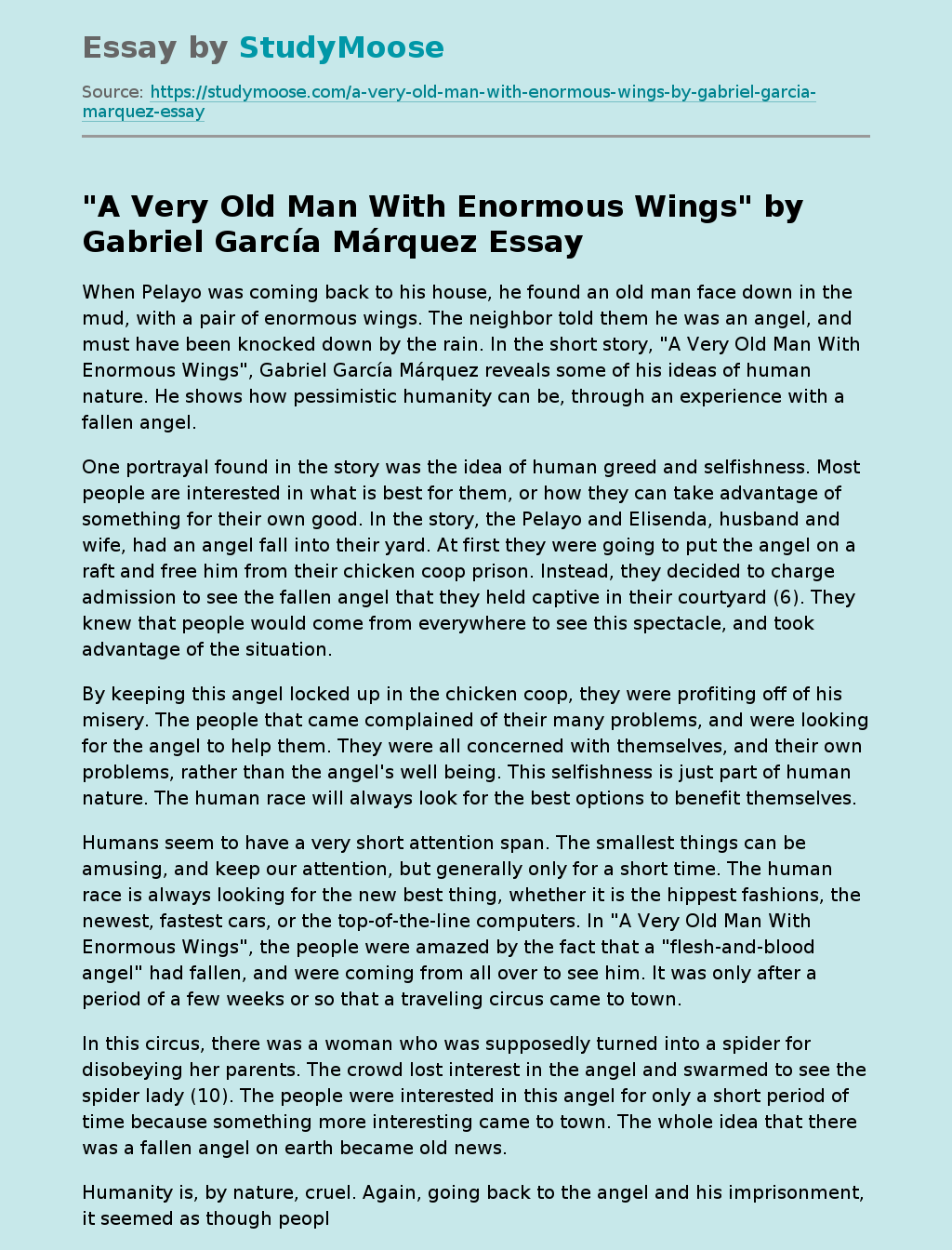