"A Thing of Beauty" by Charles Kray

“A Thing of Beauty” by Charles Kray is a very interesting story about how a Nazi soldier interrogates nuns at a convent. This is a particularly interesting topic because it is unusual and it explores the different outcomes of the situation.

It was very surprising that the colonel did not kill Sister Benedicte even though he knew that she was actually Edith Stein. Kray’s use of tone and sarcasm in the script helps create the backbone of the story and builds tension in the play.

Don't use plagiarized sources. Get your custom essay on
“ “A Thing of Beauty” by Charles Kray ”
Get custom paper
NEW! smart matching with writer

The structure of the play is very simple yet it is an important aspect of making the play appealing. The Prioress and the Colonel start off by talking about the Colonel’s search for Edith Stein. This is not only an exciting beginning that gets the audience interested, but it is also very informative because it introduces what the play is about and what the intentions of the colonel is. As the play progresses, the Colonel insist on the interrogation of Sister Benedicta, because he had a strong instinct that she is, or was, Edith Stein.

During the interrogation, both the colonel and Sister Benedicta learnt a lot from each other. They both have different point of views and they explain to each other why they believe in their principles. At the end, the colonel becomes convinced that Sister Benedicta is Edith Stein, but he does not take her away to kill her, because after listening to her teachings, he has a better understanding of the situation. The ending is important because it’s the final moment to see the Colonel’s decision in what happens to Sister Benedicta.

Throughout the story, Kray builds the tension, keeping the audience involved. In the beginning the tension already starts because the Colonel immediately wants to find this Edith Stein and is going through extreme measures to find her. “…nineteen innocent nuns are taken off a train like criminals and sent to a concentration camp.” The audience is in suspense during Sister Benedicta’s interrogation with the Colonel because with every question he asks, the audience wonders if she will be put into concentration camp. At the end of their conversation, the suspense is at its peak because it is the final moment when the decision is to be made. “You may go, Sister. (Pause) Oh Sister? (Pause) I shall go on searching.” Everybody is finally relieved that the Colonel lets Sister Benedicta go at the end of the play.

Both Sister Benedicta and the Colonel are very strong characters and strongly support their point of view. They both fight and argue about the situation and their arguments are very sturdy. “Sister, you are preaching fear. Do you think you can intimidate me? We are masters at this type of strategy,” the Colonel says, proving his point. As they both explain to each other about their strong point of views, they being to learn from each other. They see through each others’ eyes, and both change their views, especially the Colonel. Even though the Colonel changed his views, he stays devoted to the army and pretends that he did not change his views. “You are like a parrot, Colonel. You spew the party line faithfully.” Sister Benedicta says, explaining that he is only saying that because he is a Nazi soldier, not because he truly believes in it.

“A Thing of Beauty” is a very controversial story because there are two sides to look at: the Jewish and Catholic views. It’s suspenseful and exciting and will keep the audience waiting for the end. Kray uses a lot of literary techniques to make the play script effective and interesting. He uses different tones and irony to carry out the points.

"A Thing of Beauty" by Charles Kray. (2017, Nov 13). Retrieved from https://studymoose.com/a-thing-of-beauty-by-charles-kray-essay 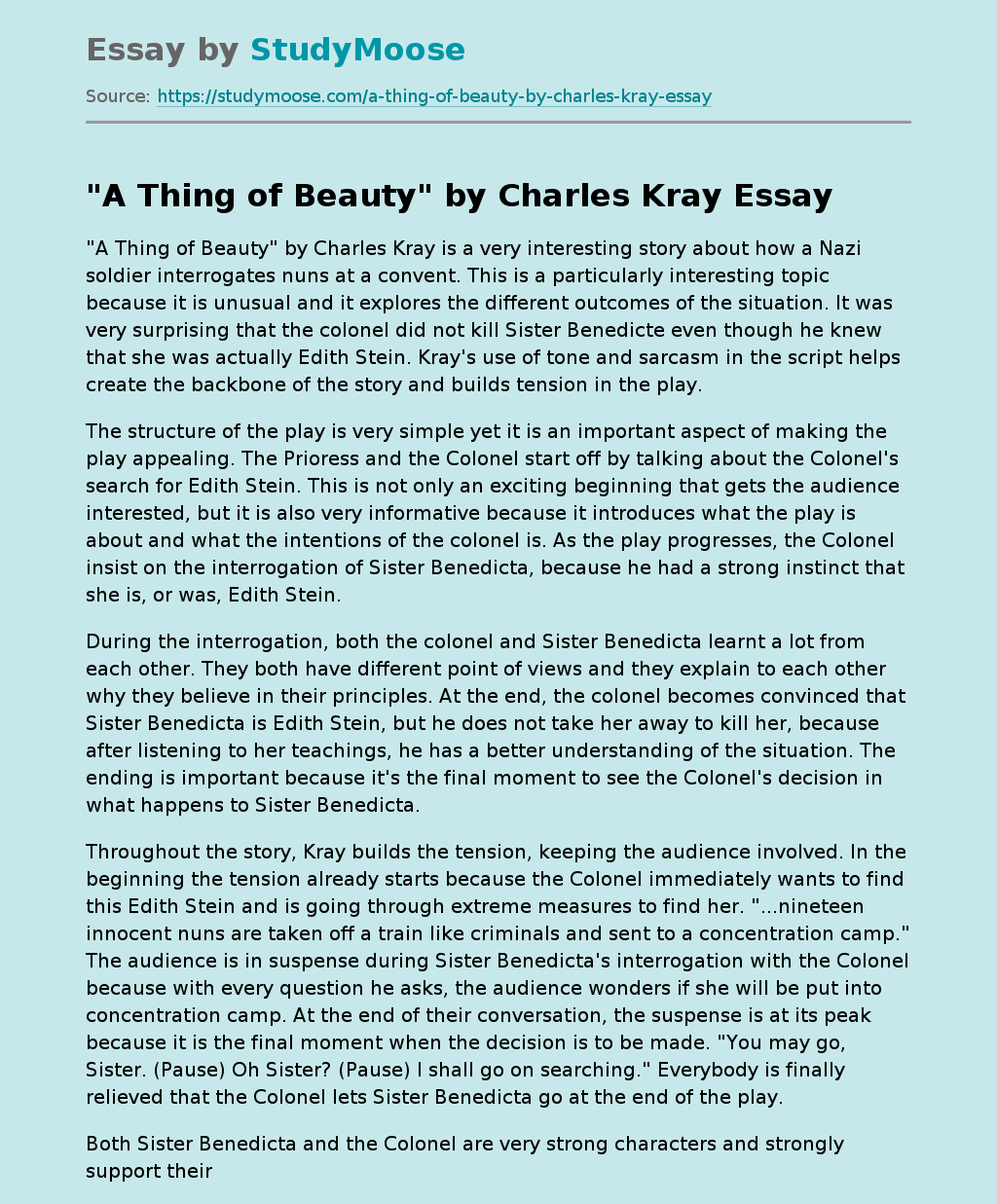