A Synopsis of the Movie The Hurt Locker

How do at least two of the following production elements combine to engage audiences with what is occurring one scene or sequence of the narrative you have studied. Scene 6 escalates the growing tension between James and Sanborn through sound and camera work. The audience assumes that the situation is extremely dangerous at the beginning of the scene due to the air raid siren sounds and the long shot establishing the evacuation of the UN building. This chaos is further emphasised by the shaky camera and the stressed voice tones in the dialogue of Sanborn and Eldridge.

Don't use plagiarized sources. Get your custom essay on
“ A Synopsis of the Movie The Hurt Locker ”
Get custom paper
NEW! smart matching with writer

The audience’s tension is then released by James’ sigh as he puts out the burning car fire. The chaotic tension between the team members and their interrelationships is highlighted by the quick, hasty shots between the three as they attempt to access the bomb. The audience is further involved in this scene even more so, being positioned as the fourth team member, often by shots through the scope of a gun and through the bomb suit mask.

By involving the audience, Bigelow is able to further engage the audience with the relationships between the characters.

Bigelow makes the audience on edge during this scene through the highlighted breaths and sighs of Jeremy Renner. The sighs are often used to release tension between the characters and the audience, in particular when Renner defuses the bomb and he receives his adrenaline rush. Renner also exhales heavily when searching the car for the bomb, emphasising the frustration and inability to find the bomb.

This allows the movie goers to feel James’ adrenaline rush kicking in as well.

When Renner cuts the seat of the car, the shot creates a sound edit. The audience is still experiencing the high emotions from the intercutting shots between Sanborn and James when the frame cuts to black and the sound of the cutting shocks the audience into believing that someone has been shot. Fittingly, the ripping of the material by Renner further establishes his character as a stupid or blindly courageous character, making the audience less favourable of him as he is endangering his own life and the lives of Sanborn and Eldridge.

A Synopsis of the Movie The Hurt Locker. (2016, Dec 09). Retrieved from https://studymoose.com/a-synopsis-of-the-movie-the-hurt-locker-essay 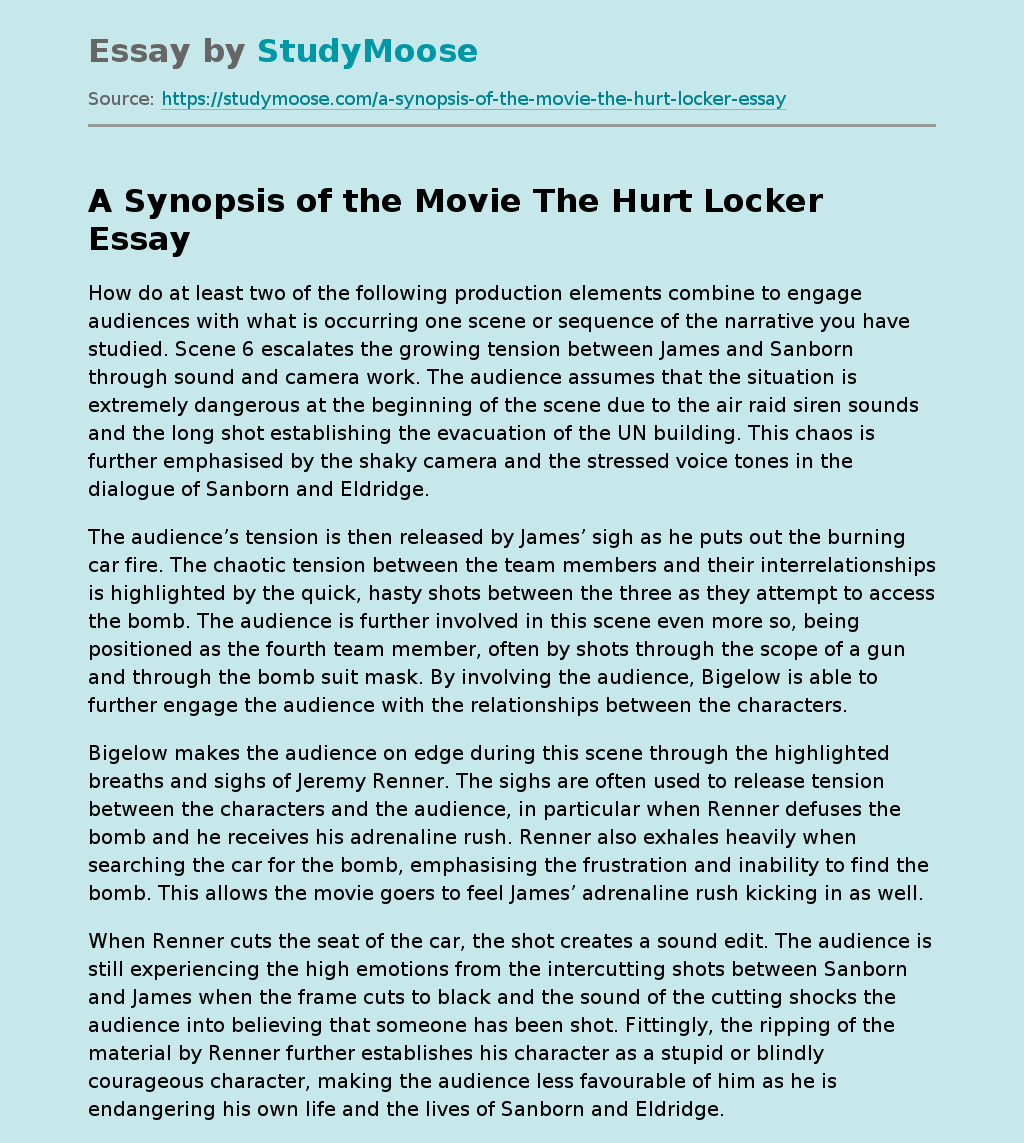