Crisostomo Ibarra of the Noli Me Tangere, who, with Elias’ help, escaped from the pursuing soldiers at Laguna de Bay, dug up his buried treasure, and fled to Cuba where he became rich and befriended many Spanish officials. Thirteen years after leaving the Philippines, Crisostomo Ibarra returned as Simoun, a rich jeweler with a beard and blue-tinted glasses, and a close friend of the Captain-General. Abandoning his personality, he became a revolutionist, seeking revenge against the Spanish Philippine system responsible for his misfortunes by plotting a revolution.

Don't use plagiarized sources.
Get Your Custom Essay on ﻿Synopsis of El Filibusterismo Just from $13,9/Page

Simoun gradually made his way into the Manila high society and influenced every decision of the Captain-General to mismanage the country’s affairs so that a revolution will break out.

By using his wealth and political influence, he encourages corruption in the government, promotes the oppression of the masses, and hastens the moral degradation of the country so that the people may become desperate and fight. He sarcastically sides with the upper classes, encouraging them to commit abuses against the masses to encourage the lower classes to revolt against the oppressive Spanish colonial regime.

He did not attempt to fight the authorities through legal means but through violent revolution using the masses. Simoun has reasons for plotting a revolution. First is to rescue María Clara from the convent of Santa Clara and second, to get rid of ills and evils of Philippine society.

The story of El Filibusterismo begins on board the clumsy, roundish shaped steamer Thesteamer was sailing upstream the Pasig from Manila to Laguna de Bay. Among the passengers were Simoun, the rich jeweler; Doña Victorina, the ridiculously pro-Spanish native woman who is going to Laguna in search of her henpecked husband, Doctor Tiburcio de Espadaña, who had deserted her; Paulita Gomez, her beautiful niece; Ben-Zayb (anagram of Ibañez), a Spanish journalist who writes silly articles about the Filipinos; Father Sibyla, vice-rector of the University of Santo Tomas; Father Camorra, the parish priest of the town of Tiani; Don Custodio, a pro-Spanish Filipino holding a position in the government; Father Salvi, thin Franciscan friar and former cura of San Diego; Father Irene, a kind friar who was a friend of the Filipino students; Father Florentino, a retired scholarly and patriotic Filipino priest; Isagani, a poet-nephew of Padre Florentino and a lover of Paulita; and Basilio, son of Sisa and promising medical student, whose medical education was financed by his patron, Capitan Tiago.

Simoun, a man of wealth and mystery, is a very close friend and confidante of the Spanish governor general. Because of his great influence in Malacañang, he was called the “Brown Cardinal” or the “Black Eminence”. His true identity was discovered by a now grown-up Basilio while he was visiting the grave of his mother, Sisa, as Simoun dug near the grave site for his buried treasures. Simoun spared Basilio’s life and asked him to join in his planned revolution against the government, convincing him by bringing up the tragic misfortunes of Basilio’s family. Basilio declined the offer because he still hoped that the country’s condition will improve. Basilio, at this point, is a graduating student of medicine at the Ateneo Municipal de Manila. After the death of his mother, Sisa, and the disappearance of his younger brother, Crispín, Basilio obeyed the advice of the dying boatman, Elías, and traveled to Manila to study.

Basilio was adopted by Captain Tiago after María Clara entered the convent. With Captain Tiago’s help, Basilio was able to go to Colegio de San Juan de Letrán where, at first, he was glared upon by his classmates and teachers not only because of the color of his skin but also because of his untidy appearance which he also experienced at Ateneo. Captain Tiago’s confessor, Father Irene is making Captain Tiago’s health worse by giving him opium even as Basilio tried hard to prevent Captain Tiago from smoking it. He and the other students wanted to establish a Spanish language academy so that they can learn to speak and write Spanish despite the opposition from the Dominican friars of the Universidad de Santo Tomás. With the help of a reluctant Father Irene as their mediator and Don Custodio’s decision, the academy was established; however they will only serve as caretakers of the school not as the teachers. Depressed and defeated, they held a mock celebration at a pancitería while a spy for the friars witnessed the proceedings.

Simoun, for his part, kept in close contact with the bandit group of Kabesang Tales, a former cabeza de barangay who suffered misfortunes at the hands of the friars. Once a farmer owning a prosperous sugarcane plantation and a cabeza de barangay (barangay head), he was forced to give everything to the greedy and corrupt Spanish friars. His son, Tano, who became a civil guard, was captured by bandits; his daughter Juli worked as a maid to get enough ransom money for his freedom; and his father, Tandang Selo, suffered a stroke and became mute.

Before joining the bandits, Tales took Simoun’s revolver while Simoun was staying at his house for the night. As payment, Tales left a locket that once belonged to María Clara. To further strengthen the revolution, Simoun had Quiroga, a Chinese man hoping to be appointed consul to the Philippines, smuggled weapons into the country using Quiroga’s market as a front. Simoun wished to attack during a stage play with all of his enemies in attendance but he suddenly aborted the attack when he learned from Basilio that María Clara had died earlier that day in the convent.

A few days after the mock celebration by the students, the people are troubled when disturbing posters are found displayed around the city. The authorities accused the students, those present at the pancitería, of agitation and disturbance of peace and had them arrested. Basilio, although not present at the mock celebration, was also arrested. Captain Tiago died after finding out about the incident and as stated in his will—made by Father Irene, all his possessions were given to the Church, leaving nothing for Basilio. Basilio was left in prison as the other students were released.

A high official tried to intervene for the release of Basilio but the Captain-General, bearing grudges against the high official, forced him to tender his resignation. Juli, Basilio’s girlfriend and the daughter of Kabesang Tales, tried to ask for Father Camorra’s help upon the advice of an elder woman. Instead of helping Juli, however, the priest tried to rape her as he had long-hidden desires for Juli. Juli, rather than submit to the will of the friar, jumps over the balcony to her death.

Basilio was soon released with the help of Simoun. Basilio, now a changed man and after hearing about Juli’s suicide, finally joined Simoun’s revolution. Simoun then told Basilio his plan at the wedding of Paulita Gómez and Juanito, Basilio’s hunch-backed classmate. His plan was to conceal nitroglycerin inside a pomegranate-styled Kerosene lamp that Simoun will give to the newlyweds as a gift during the wedding reception. The reception took place at the former home of the late Captain Tiago, which was now filled with explosives planted by Simoun. According to Simoun, the lamp will stay lighted for only 20 minutes before it flickers; if someone attempted to turn the wick, it will explode and kill everyone—important members of civil society and the Church hierarchy—inside the house. Outside the house, Basilio was about to walk away because he knew the lamp was going to explode anytime soon but Basilio had a change of heart and attempted to warn Isagani, his friend and the former boyfriend of Paulita. Simoun left the reception early as planned and left a note behind;

The people at the reception were shocked because Ibarra was supposed to be dead. Initially thinking that it was simply a bad joke, Father Salví recognized the handwriting and confirmed that it was indeed Ibarra’s. As people began to panic, the lamp flickered. Father Irene tried to turn the wick up when Isagani, due to his undying love for Paulita, burst into the room and threw the lamp into the river, ruining Simoun’s plans. He escaped by diving into the river as guards chased after him. He later regretted his impulsive action because he had contradicted his own belief that he loved his nation more than Paulita and that the explosion and revolution could have fulfilled his ideals for Filipino society. The band got caught and confessed that Simoun lead them.Simoun, now unmasked as the person behind the attempted bombing and failed revolution, became a fugitive. Wounded and exhausted after he was shot by the pursuing Guardia Civil, he found shelter at the home of Father Florentino, Isagani’s uncle, and comes under the care of Doctor Tiburcio de Espadaña, Doña Victorina’s husband, who was also hiding at the house.

The Spanish authorities, however, learned of his presence in the house of Padre Florentino. Lieutenant Perez of the Guardia Civil informs the priest by letter that he would come at eight o’clock that night to arrest Simoun. Simoun took poison in order for him not to be captured alive. Before he died, he revealed his real identity to Father Florentino while they exchanged thoughts about the failure of his revolution and why God forsook him. Father Florentino said that God did not forsake him and that his plans were not for the greater good but for personal gain.

Simoun, finally accepted Father Florentino’s explanation, squeezed his hand and died. Watching Simoun die peacefully with a clear conscience and at peace with God, Father Florentino falls upon his knees and prays for the dead jeweler. Father Florentino then took Simoun’s remaining jewels and threw them into the Pacific Ocean with the corals hoping that they would not be used by the greedy, and that when the time came that it would be used for the greater good, when the nation would be finally deserving liberty for themselves, the sea would reveal the treasures. 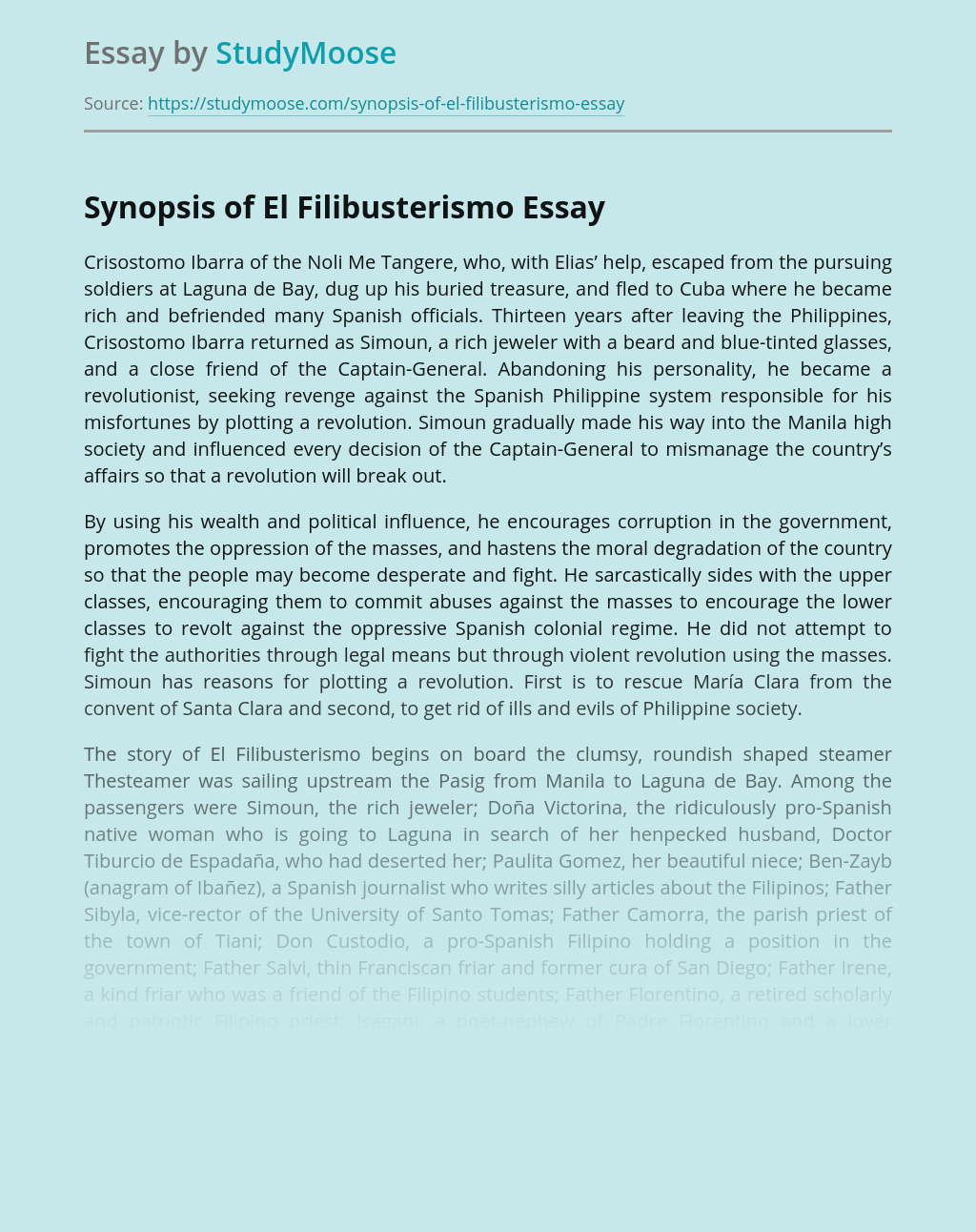 Introduction 1.A) Outline Computer? A Electronic machine which might acknowledge informations in specific structure, methodology info the once effects of making ready throughout a planned arrangement as data . [Designing Embedded instrumentation second edition unhitch by john catsoulis]We can reason the laptop into two principle shapes one is that the standard work house (PC) the... VIEW ESSAY

View sample
Get Essay
Effect of Exercise on Cardiac Output

Make a recommendation regarding the future strategic direction if the company. According to the SWOT analysis, MD is regarded as a star taking the BCG matrix. Therefore MD should hold its position within the market. In order to do this, we have recommended a few strategies for MD to maintain its position. To maintain its... VIEW ESSAY

View sample
How Successfully The Dramatic Device of Disguise is used in ''As You Like It''?