A Synopsis of the Movie Edward Scissorhands

Edward Scissorhands (1990) tells us a story about an artificial man, Edward ‘Scissorhands’, who was made by a lonely inventor in his mansion atop a hill near a small town. Long after his inventor’s death, Edward is brought into society by Meg, a local resident and encounters many new and interesting things as he attempts to belong in civilization. The text explores concepts of belonging to groups or communities and a sense of belonging in relationships shown by Edward’s endless struggle to find clarity and purpose.

Don't use plagiarized sources. Get your custom essay on
“ A Synopsis of the Movie Edward Scissorhands ”
Get custom paper
NEW! smart matching with writer

A sense of isolation can come from one’s difference to others, whether it be physical, mental or spiritual. Edward’s hands made out of sharp scissors are iconic of his separation from the rest of society. They create a physical barrier between him and others which greatly limits the amount of physical contact Edward can have with others and the rest of the world and in turn creates a sense of isolation. This is carefully and noticeably communicated by Burton through the use of colour and contrast.

His hair is jet black and very messy and his face is pale white. This along with Edward’s mansion, a dark place riddled with cobwebs and falling apart, so far away from society, juxtaposes fantastically with the bright and vibrant colours of the town, the houses and the clothes and outfits of the townspeople. He in fact only finds a sense of belonging when he is shown kindness and outreach by Meg.

She gives him clothes to wear, which although do not seem to break his theme of darkness and dullness, do still symbolise his inclusion and belonging in their society. She also offers him purpose, letting him use his scissors to trim her garden hedges and in doing this, she turns what Edward, among others, fears to be tools of destruction into tools of creativity and resultantly breaches the barrier between Edward and the world. This gives him a sense of belonging within Meg’s family and the rest of the community.

A sense of belonging can also be achieved though relationships with others. Edward finds love when he first lays eyes on Kim, Meg’s daughter. At first she is quite intimidated by Edward and does not quite feel as if he belongs there but she gradually warms to him as everyone else does and shows him deserved kindness, making him feel as if he does belong. However this feeling of connection is eventually lost when Edward is falsely accused by Joyce of sexual harassment and framed for robbery due to his innocence and loyalty to Kim; “(I did it) because you asked me to.” He is driven out of town after further misunderstandings in which he accidentally hurts few people and it becomes clear that he can’t quite belong their because of the sole fact that the vast majority of the townspeople can’t seems to understand him.

His escape from the town and its community is symbolised by Edward tearing off his clothes to reveal his original apparel. Burton uses a motif in the film; the falling of snow-like ice shards as Edward makes ice sculptures with his Scissorhands. This is used to symbolise both Edward’s connection with Kim and his final state and residence in the film. In a key scene, Kim dances under the falling ‘snow’ and this is basically the exact moment she falls for Edward. When he is driven away, he spends his time making sculptures and this has the effect of making snow over the town. Kim as a grandmother tells us “Before he came down here, it never snowed and after, it did.” The snow is metaphoric of the lack of warmth in his life, as he longs for Kim’s love. Edward’s journey of belonging is full of changes. Through his experiences we can learn and see that one can attempt to belong somewhere, whether they seem to belong there naturally or not but they may not truly succeed.

A Synopsis of the Movie Edward Scissorhands. (2016, Dec 17). Retrieved from https://studymoose.com/a-synopsis-of-the-movie-edward-scissorhands-essay 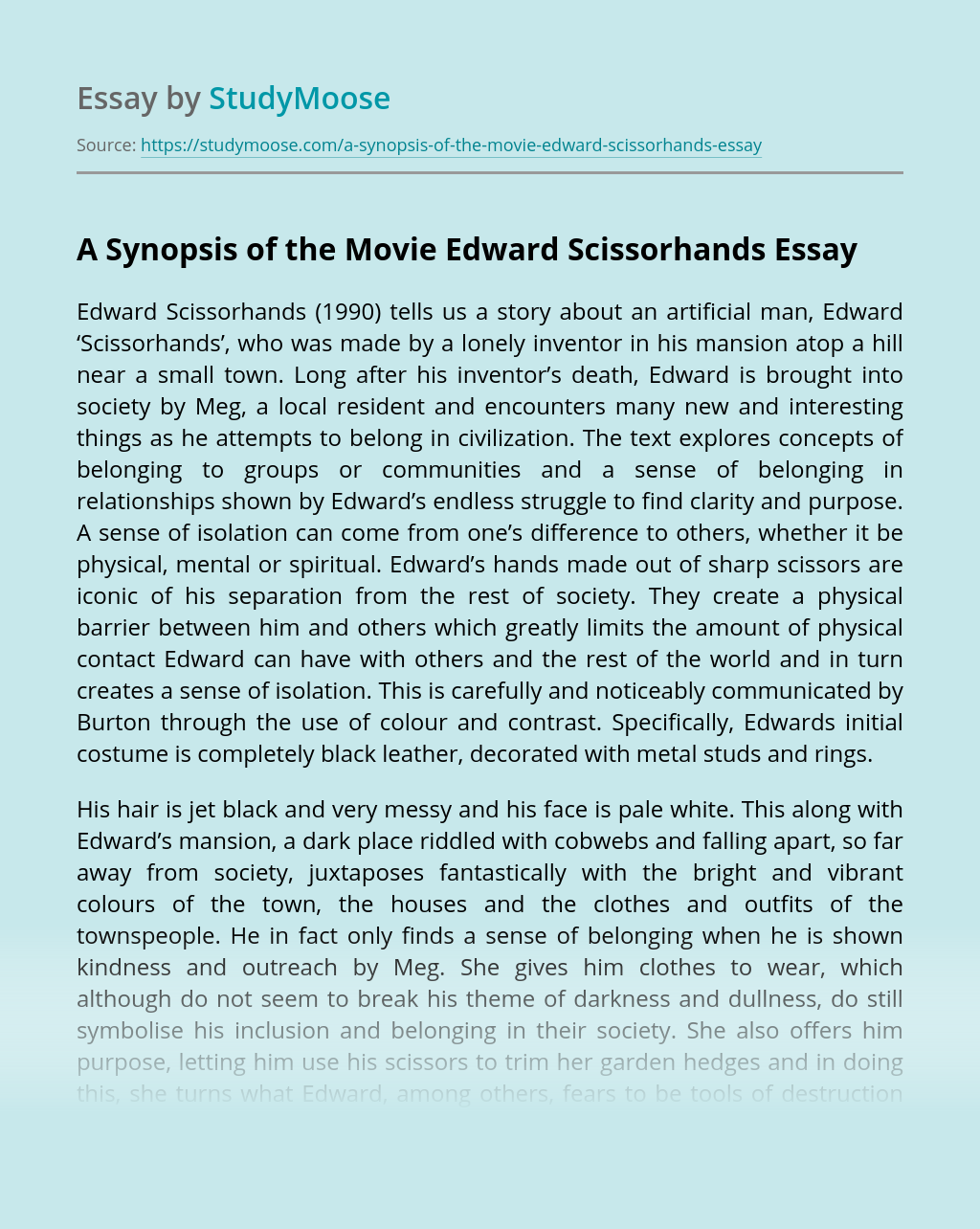