A Review of the Book and Film "Jumanji"

A review of the book and film “Jumanji” by Chris Van Allsburg.

The story is set in Brantford, New Hampshire, 1969. Main Theme: One day, twelve year old Alan Parrish was riding down the main street when he hears “Prepare to die, Parrish!”, he starts riding much faster, as Billy Jessup and four of his friends chase after him. Alan heads for his fathers shoe factory. He jumped of his bike and ran inside. Where he meets his friend, Carl Bentley, a twenty-year old man with dark skin.

Don't use plagiarized sources. Get your custom essay on
“ A Review of the Book and Film “Jumanji” ”
Get custom paper
NEW! smart matching with writer

He shows Alan his latest creation, it was some kind of sneaker, made of canvas and white leather above a rubber sole. Alan put the shoe down on an idle conveyor belt. As Alan walked downstairs he saw men scurrying around the sole stamping machine, his father pulled out a shredded shoe, it was Carl’s new creation. “Who did this?” asked Alan’s father, Carl put up his hand, and took the blame.

Alan picked up his bike and rode home, but just as he thought he was safe Billy came out with his friends, attacked Alan and took off, with his bike. He heard a drumming sound, Brummm-tum-tum! Brummm-tum-tum!. He followed it to his fathers construction site where they were building new offices. Finally he found where it was coming from. He dug out a big trunk and smashed open the padlock with a spade. Inside the trunk was a game called JUMANJI buried in sand. When Alan returned home his parents were getting ready to go to a presentation.

Alan’s parents announced that he would go to the Cliffside Academy for Boys, they handed Alan a brochure and congratulated him. Inside the brochure was a picture of the main dormitory which was named Parrish Hall after Alan’s grandfather. Alan rolled his eyes, “great, I get picked on here because my name is Parrish, what is it going to be like when I have to live at a place named after me” Alan said. His parents were shocked with his attitude towards the school and left for the presentation. Alan packed some clothes, food and the Jumanji game into a suitcase, and just as he was about to run away, someone knocked at the door. It was Sarah Whittle, a pretty, blonde thirteen-year-old, and behind her stood Alan’s bike.

Alan showed her the game and they decided to play. Sarah picked up the dice and studied them, “I quit playing board games five years ago” she said and dropped the dice on the board. Without warning the tokens started to move all by themselves. Sarah and Alan looked at each other in amazement. They looked at the centre of the board, the crystal lens reads “At night they fly, you’d better run, these winged things are not much fun.” They started to pack up the game, without thinking Alan let the dice fall on the board, another token moves, the crystal reads, “In the jungle you must wait, until the dice read 5 or 8. Alan looked down at his body: his arms and legs were melting! And he was being sucked into the game board. Sarah ran screaming out of the house as hundreds of bats chased her down the street.

Twenty-six years later Peter and Judy Shepherd move into the old Parrish house with their Aunt Nora. They heard a drumming sound Brummm-tum-tum. They followed it to an old storage room, where they discovered a game called Jumanji, they set it up on the floor. Judy rolls first, the crystal in the middle reads “A tiny bite can make you itch, make you sneeze and make you twitch”, A loud buzzing sound reached their ears, they looked up, giant mosquitoes were heading straight for them. Judy grabbed an old tennis racquet and hit one through the window, the others followed. Judy read the warning. Adventurers, beware: do not begin unless you intend to finish. The exciting consequences of the game will vanish only when a player has reached Jumanji and called out its name. What else will come out of the mysterious game of Jumanji?

Analysis: This book is very easy to read. It isn’t a long book, but the author still makes you think you have achieved something by adding in numerous chapters (e.g. page 80 is the start of chapter 14). TriStar Pictures have recently made a motion picture, based on the book, which stars Robin Williams. During the Easter break I intend to see the movie. I like reading books that are later made into movies, because then I can see how other people have interpreted the book to produce the movie. I like this book because it is full of adventure and it is also funny. The book’s title “JUMANJI” is catchy, original, creative and easy to remember. Recommendation: I would recommend the book to anyone, between the ages of 10 – 15, because it is original, easy to read, and an all round good book. I rate the book a nine and a half, out of ten (91/2 / 10).

A Review of the Book and Film "Jumanji". (2020, Jun 02). Retrieved from https://studymoose.com/a-review-of-the-book-and-film-jumanji-essay 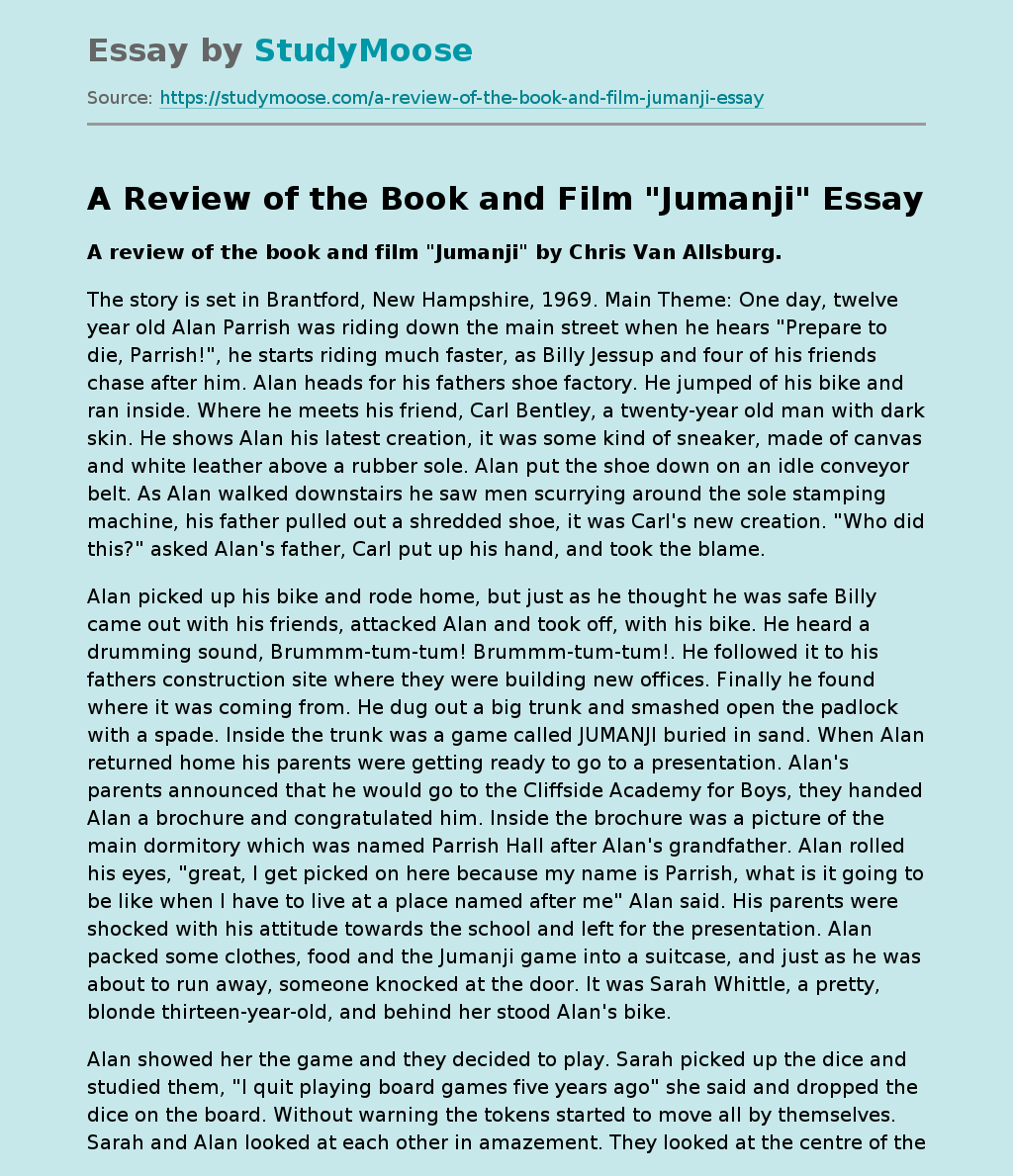