A Review about the movie “Raise Your Voice”

This is about a young woman named, Terri Fletcher (Hillary Duff), who’s fond of singing to herself, but never in public. She is always afraid to raise her voice to the world. However, she and her brother, Paul Fletcher (Jason Ritter), is sharing the same dream, for Terri to be a famous and successful artist, so he secretly captured her talent and then sent it to California’s most famous music school.

Paul was very excited about the application that he asked Terri to go and sneak with him to see a concert.

Don't use plagiarized sources. Get your custom essay on
“ A Review about the movie “Raise Your Voice” ”
Get custom paper
NEW! smart matching with writer

On the way home, a truck hit them that killed Paul. Terri became very traumatic about it, especially when seeing a light ray; it reminds her of her brother’s death. She became very depressed about the incident that she blames herself of it. Until they received a letter from her dream school, saying that she was admitted and that, the school has offered her a spot to the following school year.

Even though it’s her dream school and that every aspiring artist would die to be admitted to this school, she has no plan of accepting their offer, for she’s thinking that by accepting the offer could also mean that she’s betraying her brother to leave him alone, not knowing that her brother sent the application himself.

But her parents told her that this could also be a good opportunity for her to take a break after everything that has happened. By pursuing her and her brother’s dream could also give her a way to be far from home, far from traumatic memories of her brother, to be freed from her guilt.

She then, accepted the offer and went to California.

She didn’t know what’s awaiting there for her but she’s hoping that somehow her brother will help her pursue their dreams. She brought nothing but her talent and her inspiration with her. She feels so alone, until she met Jay Corgan (Oliver James).

He is also a student in California Music High School; he’s the first to approach Terri and helped her fix her arrangements in the school. She’s lucky to readily find a friend in a foreign place. He helped her in all things and together, they faced the challenges encountered. But, there came the time that she fail to meet her professors’ expectations and that she became hopeless of trying to do so. Then, her professor showed her something to cheer her up.

It’s her brother’s video of her singing, supporting and cheering for her. She then, felt the tears in her eyes, and finally knew that it’s all because of her brother that everything came to pass, that she’s about to reach their dream. And that, her brother only wants the best for her. She’s lifted from her burdens and felt her brother’s love for her. From then on, she did her best to make up for her brother and that her brother’s efforts won’t be put to waste.

Jay never left her through the journey to their dreams. But there’s still something that Terri needs to overcome. It’s her fear of light rays. She’s still suffering a trauma. It’s essential for her to overcome her trauma, for in order to perform on stage, lights are dawned on you! She couldn’t perform unless she overcome her weaknesses. In lined with this, there is a competition on campus and her professor is expecting the both of them, Terri and Jay, to join the competition.

Then came the competition, everyone is furious about it, even her parents who’s aware of Terri’s fright of lights. They fear that she might freak out or collapse whenever that happens. But they are somewhat believing that she can do it and that Paul will help her in his own ways. And miracles happened. When Terri and Jay’s turn came, lights were already dawned on them. She felt the trauma again and was frightened, she couldn’t sing. But suddenly, she saw her brother, smiling at him from the lights, cheering her up and let her know that he’s proud of her. The scenario lightened her feeling and took her trauma away.

From then on, everything she do, she dedicates it to her brother, who first believed in her. And taught her how to raise her voice to the world!

A Review about the movie “Raise Your Voice”. (2016, Oct 25). Retrieved from https://studymoose.com/a-review-about-the-movie-raise-your-voice-essay 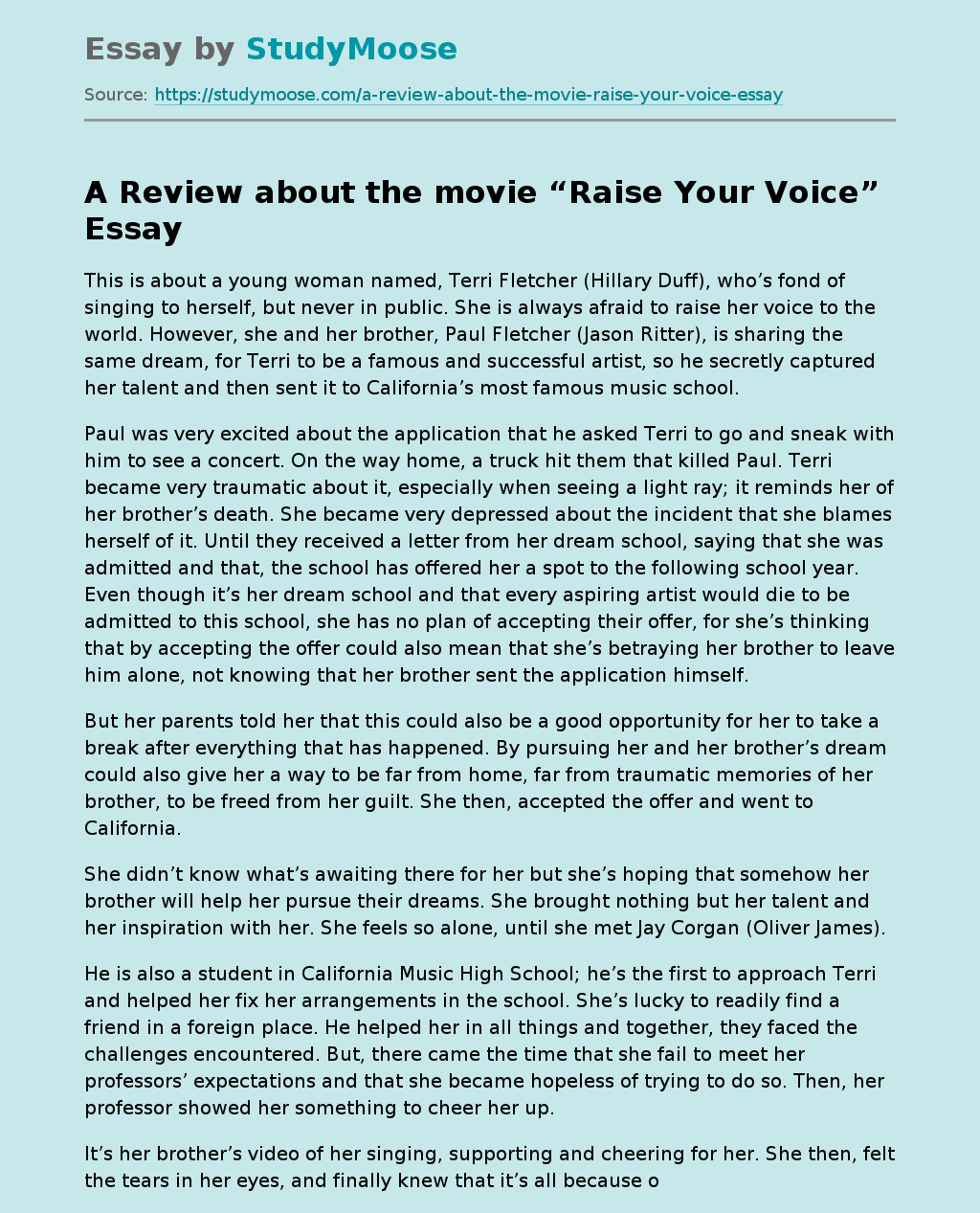