A Picture Is Worth a Thousand Words

“A picture is worth a thousand words”, is a common saying that rings true. Which is why many newspapers decide to compliment their articles with visual elements such as photographs, drawings, or political cartoons. However, many people feel that some of the images newspapers decide to print are in bad taste.

Huge Hewitt, an Evangelical Christian, compared a political cartoon of Muhammad with a bomb for a turban, to a drawing of Jesus with a crown of TNT atop his head at an abortion clinic.

Don't use plagiarized sources. Get your custom essay on
“ A Picture Is Worth a Thousand Words ”
Get custom paper
NEW! smart matching with writer

Because both cartoons are equally distressing and offensive, wether you are Muslim or Christian, I doubt that a newspaper in the United States would print either image.

On the other hand, if I was the editor of a newspaper I would print both pictures. After the terrorist attacks of September 11th there was a huge backlash on the Muslim culture and its people in this country. The cartoon of Muhammad with a bomb as a turban illustrates, literately, how ignorant and insensitive we are to Muslim beliefs.

Proficient in: A picture is worth a thousand words

As editor, I would add an article to the cartoon explaining how it is not created out of malice or hatred, but it is a form of satire. It was drawn to grab your attention and inspire you to ask questions about the Muslim world, what is currently happening there, and how are we, as a country, involved.

As editor, I would treat the cartoon of Jesus with a crown of TNT the same way. The accompanying article would clearly state that the image in no way mocks the Christian belief system.

The picture does, however, raise questions about how God, or Jesus, would view the bombing of an abortion clinic, wether the life of a fetus is more important than that of its mother, and so forth. As I have stated previously, the cartoons are satire, not actual opinions or suggestions. The drawings are to be viewed as debate starters or to help you to create your own opinions about what is being portrayed.

Furthermore, under the First Amendment of the Constitution of the United States, freedom of the press is clearly stated. These pictures, however disagreeable they maybe to some, the newspaper has its right to print them and the readers have the right to view them.

In conclusion, I do not feel that any form of imagery is too bold to be printed in a newspaper, least of all a political cartoon of Jesus with TNT as a crown. As long as the readers do not take the picture for face value and can read deeper into the topic being presented, then there is no problem. As for offending people, they can just buy another newspaper if they don’t like the pictures in mine.

A Picture Is Worth a Thousand Words. (2016, Jun 04). Retrieved from https://studymoose.com/a-picture-is-worth-a-thousand-words-essay 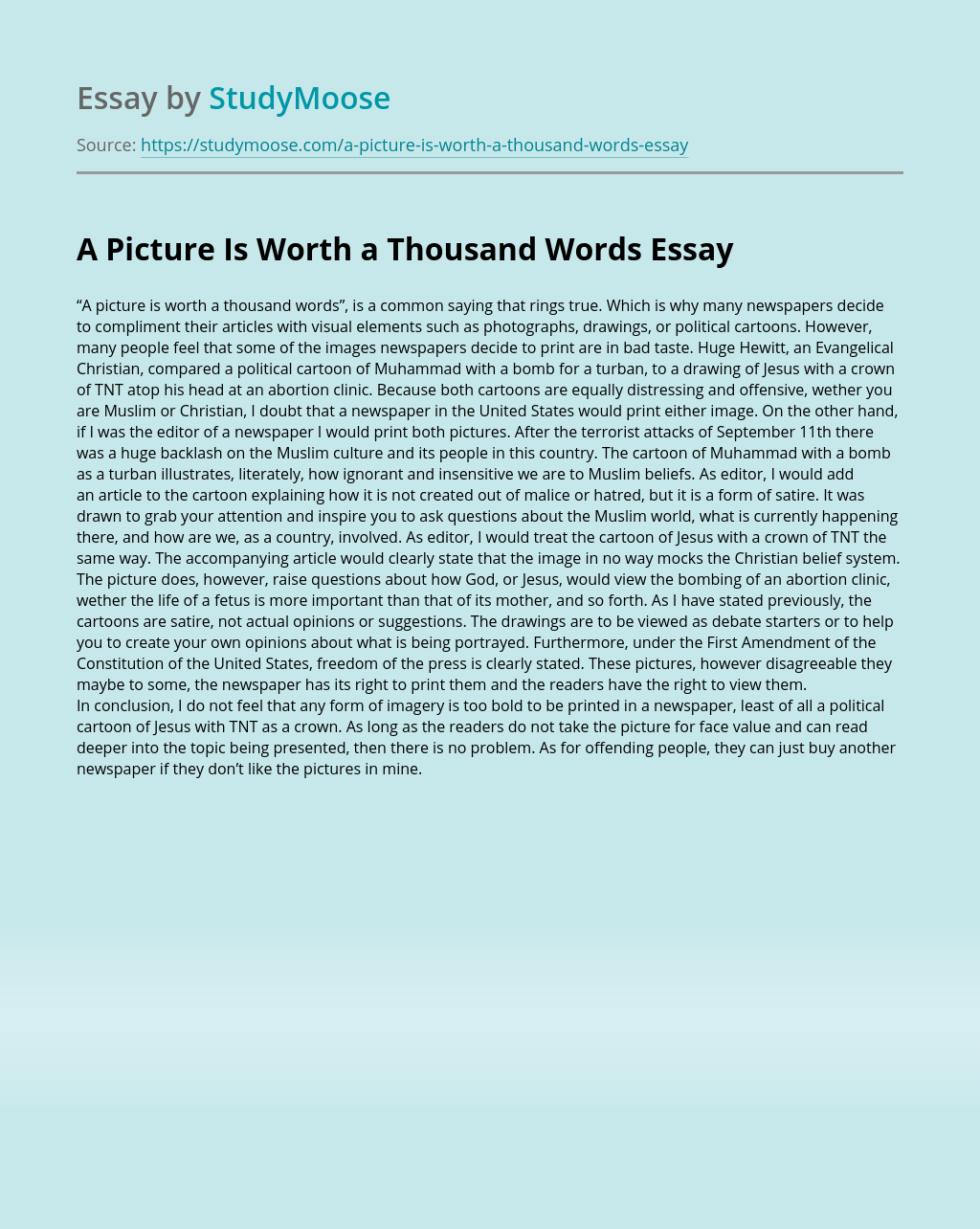