A Man and His Dream: Death of A Salesman

Willy Loman, the main character in Death of A Salesman by Arthur Miller, exemplifies a collective impression. This impression is presented in the literature on the topic of the liberty of the person in hostility to the guiding burdens of civilization. Willy Loman demonstrates this individualism; one who airs to his aristocrats as less important individuals. Willy Loman becomes uncontrollable and somewhat insane. Not only was he viable and imperious, but Willy Loman also sought the idea that he would never obtain becoming the greatest salesman ever, determined to make money.

Don't use plagiarized sources. Get your custom essay on
“ A Man and His Dream: Death of A Salesman ”
Get custom paper
NEW! smart matching with writer

Through his interchange and actions, Willy Loman depicts a character of self-doubt, perseverance, and unknown identity.

Willy believes that being liked and dressing well, together, can bring him all the success of money and friends. From the start of Willy’s life, he has experienced problems with popularity and personality, even his last name is a pun on a “low man.” Willy does not have many friends or even people who like him, he lingers at the bottom of the business totem pole as an unsuccessful salesman.

Willy believes if he had beauty unlike others that doors would open themselves up and problems would just disappear.

Throughout his career with the Wagner Company, a multitude of issues arose that forced financial and economic difficulties on Willy and his family. He eluded often, “I have Friends…They know me up and down New England” (Miller, 637). He was resolute to live by morals that positioned him above everyone else. It was with these fabrications and delusions that willy’s life began to lose its’ air on reality.

He lost his character, bravery, and self-respect throughout the world as a salesman. Realistically, Willy was not successful, nor did he have friends and people who liked him. Willy always promised his son’s wealth and success, but he could not give that to him. Willy spent days upon days fantasizing of the past, thinking of himself and his son Biff who he knew had potential. Biff never took advantage of those potentials, and when Willy lost Biff, his life became an even larger failure. See Biff was Will’s inspiration as a father, He had the determination to become a great football player, not to mention make something with his life and the Loman name. However, Biff failed math and threw his opportunities out the window. It was then when the father and son began to drift apart.

‘ Although Willy is aware, maybe weakly and faultily, that he is not cut out for triumph in the world of trade and business, he, however, nurtures the vision of getting the better of everybody else. And this leads him into estrangement from himself, disguising his real identity.’ (P. P. Sharma, critical analysis) In other memories and illusions, Willy often replays the moments with his brother, Ben. One time is when Willy was offered a job in Alaska; the job which would have made him a very wealthy man, now only haunts his memories. Now every time Willy’s sales come up short, he is left with a crippling reminder of Alaska. Willy decided to ask for a job in New York, but at this time the company had decided to stop paying salaries and base everything on sole commission. But for a salesman who cannot sell well, the loss of a salary is very disadvantageous to his well-being.

Willy’s life was always situated on a dream of money, success, and prosperity, but had he involved himself in more physical work he could have occupied his mind more. Since prosperity never arrived, Willy spent enormous amounts of time theorizing how to make his life what he dreamed it would be. So much so, he put his family on the sidelines, going as far as cheating on his wife. He met a woman who would be very cheap for an evening, but also give him a boost of ego for himself, “Willy:(slapping her bottom): Right. Well, bottoms up! – (He suddenly grabs her and kisses her roughly.) The Woman: I picked you.” (Miller, 638) This chance meeting did not go well when Willy’s son, Biff decided to surprise his father in Boston. Entering in on the two triggered a situation that would repeatedly haunt Biff’s mind. All the judgments of his father as a fantastic salesman were now tarnished. What manifested, in its place, was the certainty that his father was a disappointment with zero potential to ever support the family. This was the start of their lives tearing apart.

Using that disorder as a downfall and the many others that occurred in Willy Loman’s life, it was not shocking when he killed himself. In pursuit of happiness, Willy thought that he could give his family what they wanted if he only left the world, “Shh, (He turns around as if to find his way; sounds, faces, voices, seem to be swarming in upon him and he flicks at them, crying.)(Suddenly, music, faint and high, stops him. It rises in intensity, almost to an unbearable scream. He goes up and down on his toes and rushes off around the house.) Shhh!” (Miller, 698) Unfortunately, Willy’s dreams were wrong, as his family did not even care enough to go to his funeral. Willy died for the things he had lived for, his sons, and the delusions of affluence. Ironically, though, his life was not worth the happiness of his son and his life clearly was not worth the sacrifice that he continued to make throughout his lifetime.

Willy Loman was influenced by the society in that he could not overcome the gravities of selling and making money, he died still uncertain of his standing in the business world. He wanted triumph and riches, but at the age of sixty-one, he grasped that these goals would never be grasped. His character was lost and his existence on earth was unknown. His lifelong dream was happiness, but that never came either, the pressures of society killed a man who once had valor and fortitude. But, as his life moved further, Willy Loman lost his ability to see the world clearly. All his eyes could witness was desolation and lack of self-confidence. It was through his views that he decided to end his misery, by finish his life story. Willy Loman perished with lost identity, but one that found himself for a brief period; long enough to end his life forever.

A Man and His Dream: Death of A Salesman. (2020, Nov 19). Retrieved from http://studymoose.com/a-man-and-his-dream-death-of-a-salesman-essay 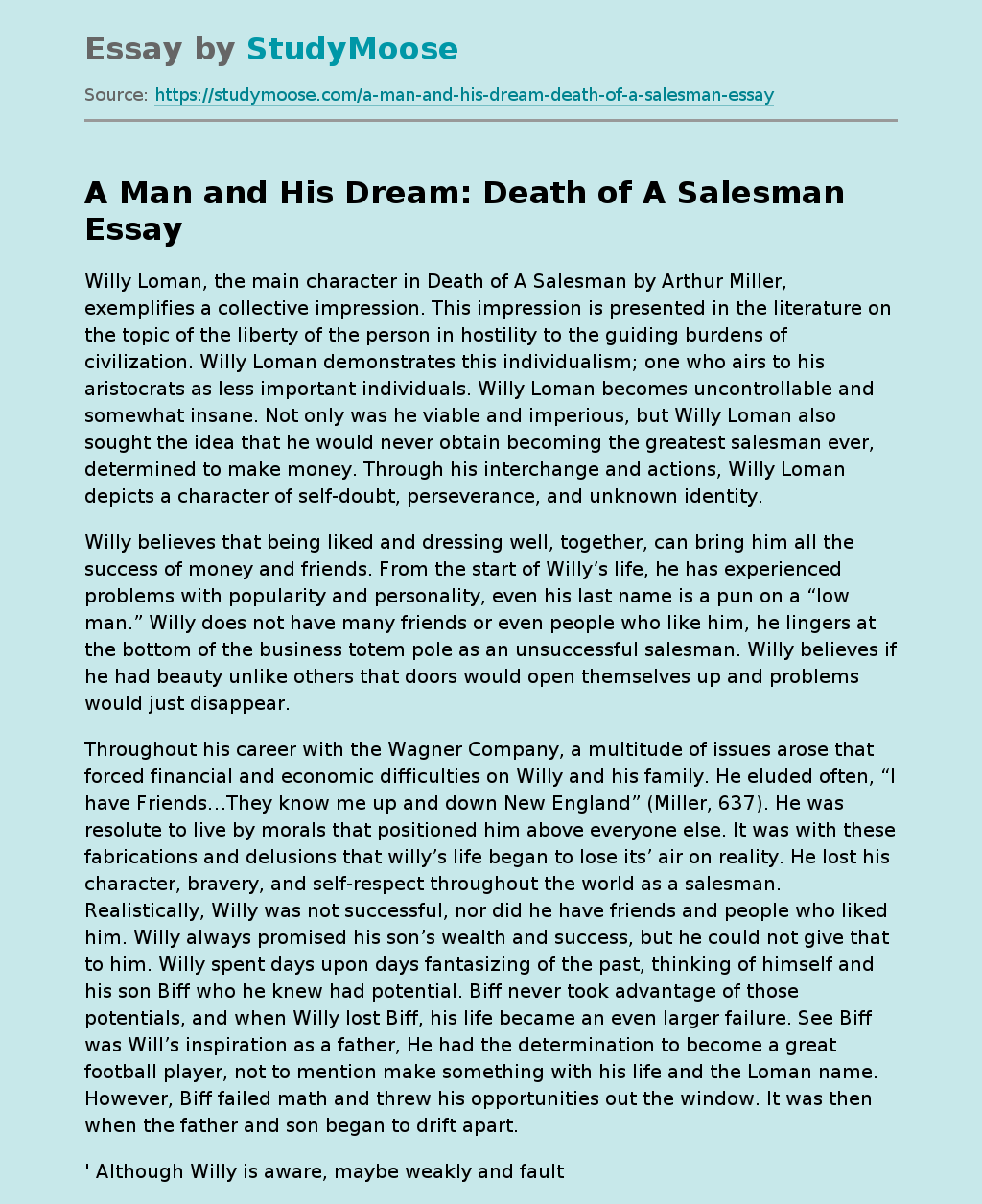