The whole world is in a financial quagmire. A myriad of financial woes have engulfed financial institutions and any other corporations in this domain all the world round. This financial meltdown came to the light following the collapse of Lehmann Brothers, after which this financial crunch came to be addressed in the open and by all the governments.

The United States of America was at the core of this crunch. This was further aggravated by the fact the Bush administration was finalizing on its clench to power.

Don't use plagiarized sources. Get your custom essay on
“ A Financial Quagmire ”
Get custom paper
NEW! smart matching with writer

A presidential election was looming and the major rivals; Barack Obama and John McCain were faced with the uphill task of unveiling their plans regarding keeping the crisis at bay and mitigating the effects. Both unveiled their economic plans to the American public and the public chose to go as per Mr. Obama’s plans; a bailout through a federal stimulus package (BRUNE, para 4).

After his election, the Congressional Democrats in partnership with President Obama came forth with an $825 billion dollar fiscal recovery package known to many as the Federal Stimulus Package.

This would give the unemployed Americans a chance to improve their lives and ensure that each and every American faces little or no difficulty in dealing with the costs of living during this period. Analysts have come forward and allegedly claim that the effects of this crisis would be felt for the next several years. The package would be used on education, aid to states for Medicaid costs, increase in unemployment benefits and on an arena of public works and projects in order to increase the jobs available to the public (HERSZENHORN, para 2 ).

The proposal of the stimulus came under serious criticism and has become subject to a lot of intense haggling, fierce lobbying by the Republicans and its core details have come under intense negotiations. A lot of pessimism has been expressed over this stimulus. Many bear the taciturn notion that it will only plunge the country into deeper waters.

The Americans would have to face an ugly recession, which is in its all-time high, and a nationwide unemployment rate of 12%. The plan, christened by the Democrats as “American Recovery and Reinvestment Bill of 2009”, has been President Obama’s core agenda as many see it as the determining factor of the direction of his presidency. The fact that it was one of his major campaign promises that gave him an edge over his rivals leaves him with no choice but to be more pragmatic and see to it that this succeeds.

A breakdown of the package includes $87 billion towards the aid to states for Medicaid costs, $79 billion for colleges and local public schools to avoid cutbacks, $90 billion for infrastructure, $54 billion to push for the production of energy from renewable sources, $10 for science and research, $6 billion for enhancement of broadband services in rural areas, $13 billion for the disabled students, $1 billion towards technology enhancement and $43 billion to extend jobless benefits and retraining; to name but just a few. Though viewed by critics as a step of misplaced ambitions and misdirected energy, it is a major leap and a good example of walking the talk rather than sitting back to let nature take its course (HERSZENHORN, para 8).

Economic experts are quick to add that though the stimulus is huge, it is not close to enough in stabilizing the economy of the United States of America. This is the highest amount of bailout that a single government has ever instituted on its economy. It is a great effort and jolt to the American economy, seen as a move to curb economic catastrophe.

Bearing in mind that there is no other viable fiscal plan at hand, the stimulus package is worth a try. Many are wise enough to note from history of The Great Depression that counteraction is the measure and any procrastination would translate to nothing short of economic suicide. 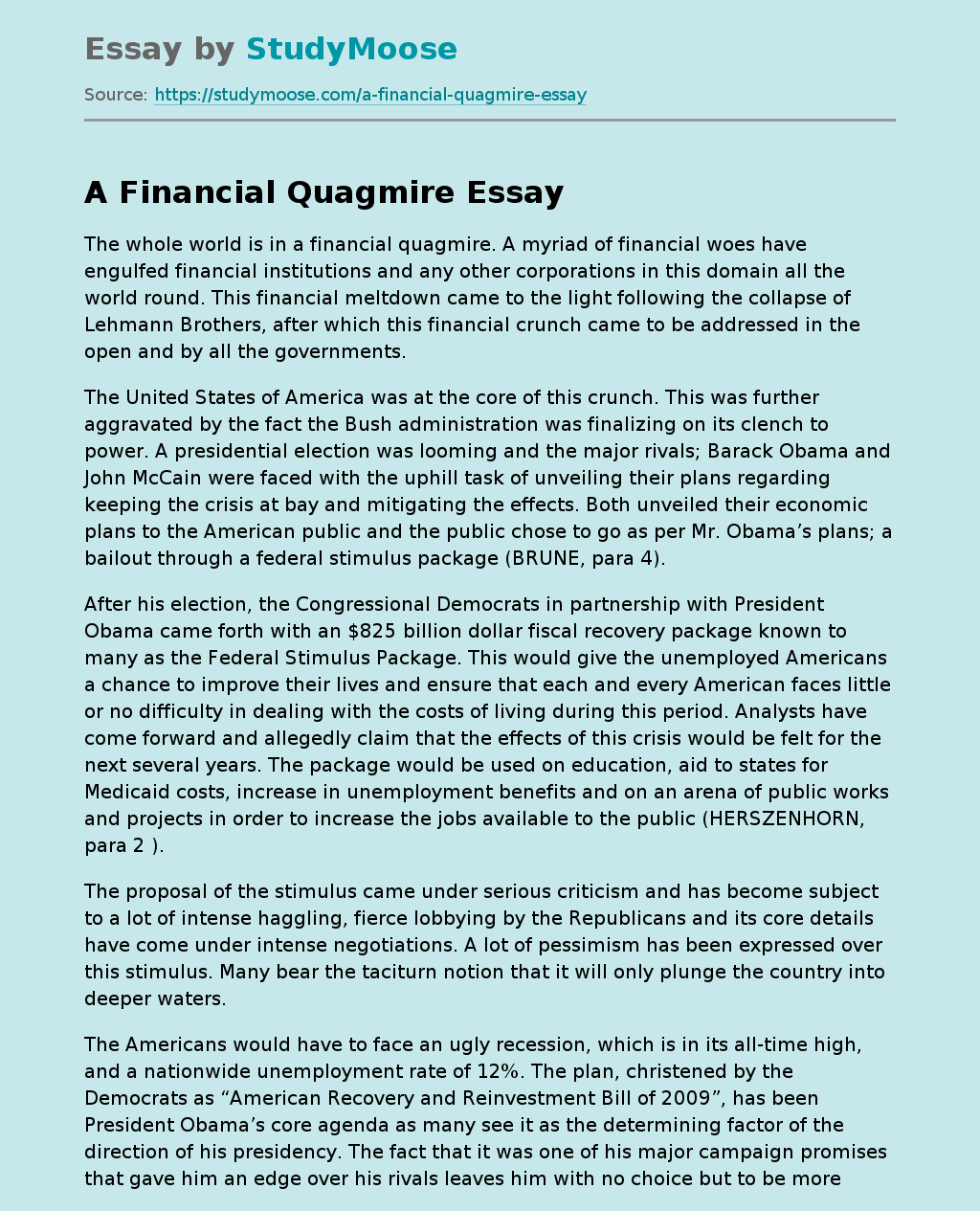