Karl Benz was born on 25th November 1844 in Karlsruhe, the son of an engine driver. The middle of the last century, when Benz was an apprentice, was a time of widespread fascination with the “new technology”. The first railway line in Germany from Nuremberg to Furth had been opened in 1835, only twenty years before, and in the space of just a few decades the railways, steamships and new production processes had ushered in a new era in technology, industry and everyday life.

Don't use plagiarized sources. Get your custom essay on
“ A Famous Person – Karl Benz ”
Get custom paper
NEW! smart matching with writer

Karl Benz attended the Karlsruhe grammar school and subsequently the Karlsruhe Polytechnic. Between 1864 and 1870, he worked for a number of different firms as a draughtsman, designer and works manager before founding his first firm in 1871 in Mannheim, with August Ritter. But little money was to be made in the building materials trade and the economic convulsions of the 1870’s caused difficulties for the young company. Karl Benz now turned to the two-stroke engine, in the hope of finding a new livelihood.

After two years’ work, his first engine finally sprang to life on New Year’s Eve, 1879. He took out various patents on this machine.

Equally important were the contacts with new business associates, with whose assistance Benz founded a gas engine factory in Mannheim. But after only a short time he withdrew from this company since it did not give him a free enough hand for his technical experiments. Benz found two new partners and with them founded “Benz & Co., Rheinische Gasmotorenfabrik” in 1883 in Mannheim, a general partnership.

With this new financial security, Karl Benz could now set about designing a “motor carriage”, with an engine based on the Otto four stroke cycle. Unlike Daimler, who installed his engine in an ordinary carriage, Benz designed not only his engine, but the whole vehicle as well. On 29th January 1886, he was granted a patent on it and on 3rd July 1886, he introduced the first automobile in the world to an astonished public. In 1903, Karl Benz retired from active participation in his company. The next year however, he joined the supervisory board of Benz & Cie and he was a member of the supervisory board of Daimler-Benz AG from 1926, when the company was formed, until his death in 1929. In 1872, Karl Benz married Bertha Ringer, who was to be of major support to him in his work. The couple produced five children. Benz lived to witness the motoring boom and the definitive penetration of his idea in to everyday life. He died on 4th April 1929. The former Benz family residence in Ladenburg is now open to the public. The Daimler-Benz foundation, founded in 1986, has its registered office here. 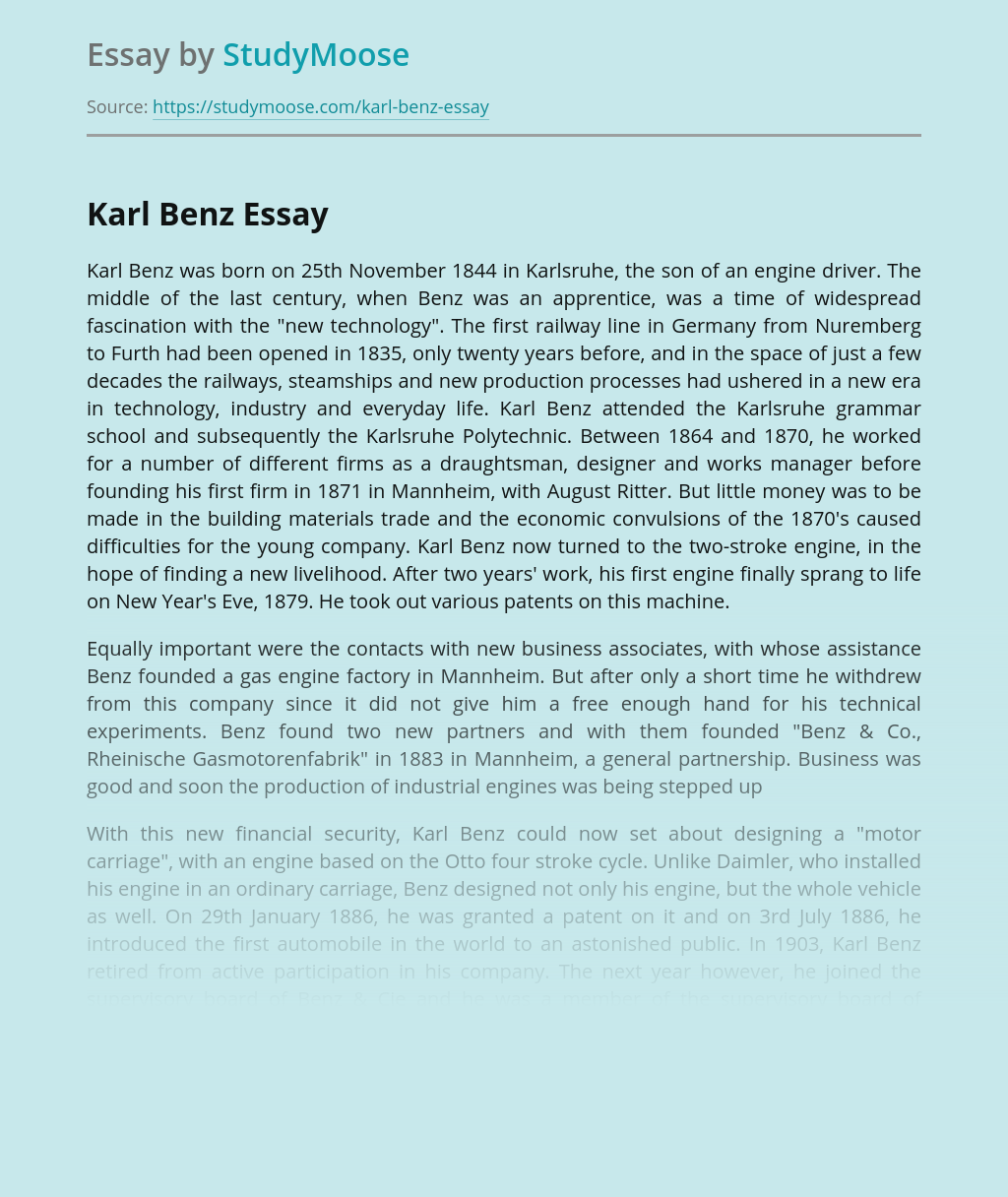