A Dissertation Upon Roast Pig

The story explains how human beings turned from eating living animals to cooking and roasting them. Referring to a Chinese manual that a friend gave him, the writer narrates the story of the first-ever roasted animal.

The story is about Ho-Ti and his son Bo-Bo. The father leaves the house and their pigsty. Once his father leaves, BoBo accidentally sets the pig farm on fir. In matter of minutes, the whole structure collapses and amidst the debris are scorched bodies of the pigs it inhabited.

Don't use plagiarized sources. Get your custom essay on
“ A Dissertation Upon Roast Pig ”
Get custom paper
NEW! smart matching with writer

BoBo is appalled but he cannot but notice the appetizing smell from the burnt rubble. He does not recognize it. All of a sudden he picks a piece of some burnt skin form a dead pig’s body. Going against his good judgment, he is compelled to taste it. Once he does taste it, he is addicted to its taste and flavor. He starts to dig into the dead roasted animals as if it is a buffet.

While BoBo is still busy devouring, his father catches him in the act. He admonishes him and yells at him. But BoBo cannot be too bothered. Instead, he offers his father to taste the animal himself. He does. Without a moment’s delay, both of them start to dig into all the burnt or roasted pigs. Ho-Ti asks his son to keep it a secret as the society would not approve of it.

However, soon the fires become a periodic occurrence at their house. In the end they are caught and brought to trial.

In the trial, the jury is offered to sample the roasted animal, and unanimously absolves them of any guilt. The judge himself suffers from the same accidental fire alter that day. In fact, these fires become a regular fixture as people find the roast impossible to reject and abstain from.

It is another few ages later that some wise them discovers that roasting does need to involve burning real estate and the art of roasting pigs comes into practice.

The writer then offers his own praise of such delicious meat and delicacy. He posits that the younger the pig, the better the taste of it. He calls the plate in which it is served as its ‘second cradle’. Its death makes it more useful than it could ever be alive. That is one of the bounties of nature and should be enjoyed and relished.

The writer thinks that even though men should share their food with others to uphold friendship and kinship but pork should be kept out of such consideration. It is just too good and appetizing to be shared. He shares a story of his childhood when his aunt gave him a delicious cake for school but he offered it as alms to a beggar on a bridge. But no sooner had he given it, he developed a sense of bitterness toward the poor man because he had, in spirit of charity, stolen the delicious cake from him.

The write than ponders over the way pigs were shocked and pacified in earlier times which seems inhuman and unnecessary as pigs are already very conforming and calm. He calls them as flowers that one can enjoy with bread or salad. But no amount of punishment on the living animals can possibly add any more flavors to it when it’s dead and roasted.

A Dissertation Upon Roast Pig. (2019, Nov 27). Retrieved from https://studymoose.com/a-dissertation-upon-roast-pig-example-essay 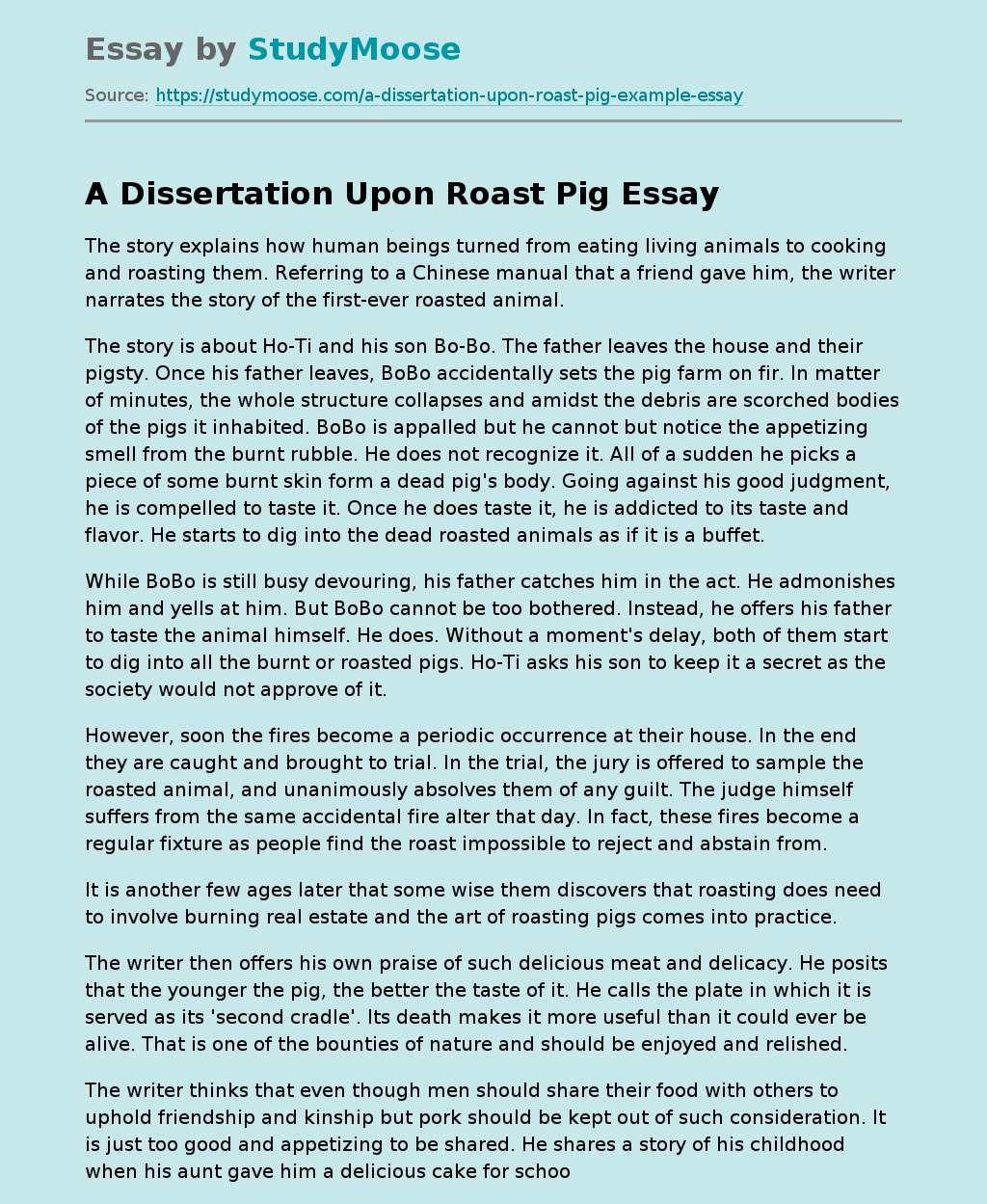