A Day Without a Mexican Reaction Paper

I have chosen to react to the 2004, Sergio Arau film, “A Day Without A Mexican”. This movie examines what might happen if one day a third of the population of the state of California just wasn’t there anymore. As the film progresses we learn that the section of the population that has disappeared is connected by the one fact that they all seem to be of Hispanic heritage. California is isolated from the rest of the country, represented by a strange pink fog, and is on its own to resolve the social, economic, and cultural issues that arise from this event.

Turn in your highest-quality paper
Get a qualified writer to help you with
“ A Day Without a Mexican Reaction Paper ”
Get high-quality paper
NEW! AI matching with writer

This film is intended to be a comedy/drama and satirically presents serious issues such as border control, illegal labor, occupational stereotypes and the inability of people, mostly white, to appreciate the Mexicans/Hispanics that they employ without having a clue about their respective cultures. There is a clear distinction even between Hispanics who are lighter to those who are darker skinned.

The lighter Hispanics are seen to have better jobs in this movie while the darker skinned are more commonly found in agricultural or domestic occupations. We follow several people and see how this event has disturbed their lives.

We see the chaos that ensues as the “invisible” population actually becomes invisible leaving mostly “whites” to acknowledge the value of the hard work they perform daily. Some learn to appreciate while others do not. A twist in this film occurs when the lead actress, who is assumed to be Mexican, didn’t vanish.

As the plot unravels, we find that she is adopted and not of Hispanic descent but eventually vanishes at the moment she realizes in her heart that she is as she was raised to be, a Mexican. As the movie ends and all return, there seems to be some improvement but not enough.

I think the director took a huge risk making this movie. On the surface this movie seems sophomoric, even bordering on the absurd but to anyone really paying attention it somehow, ungracefully, became a drama of sorts. The exaggerated, one dimensional character portrayals weren’t devised by accident. These representations seem to cut through the feigned political correctness to get to the real opinions and stereotypes that most people have towards Mexicans and Hispanics. One issue I had not considered before viewing this film was that there exists a hierarchy within these groups (Hispanics/Mexicans).

Lighter Hispanics seem to have better employment opportunities and are even considered more attractive. They seem to have adopted similar attitudes as “whites”. They are portrayed as media personalities in this movie while the others are farm-workers, nannies or housecleaners. They distance themselves from the fact that they are of the same ancestry instead of using their stature to expose and elevate the condition of the lives of their own people. There is another dimension to this hierarchy. Mexican-Americans and Hispano-Americans seem to have an antipathy towards those not born here or are here illegally.

I don’t understand this. As I considered the symbolism of the pink fog that surrounded and bordered the state of California, it occurred to me that it served the same purpose as the barrios (neighborhoods). It isolated and contained all those who remained after the Mexicans disappeared just as the barrios isolate and contain those who aren’t really seen. It wasn’t a solid barrier but whatever was on the other side was scary and hidden. Whatever was on the other side was clouded by indifference. It would have been simple to just walk through and maybe the fear and indifference would cease.

Personal identity and self-image may have been my favorite points in this movie. When the news reporter, Lila Rodriguez, was the only Mexican not to disappear, I was confused. At first I thought, along with many people in the film, that she was going to be the saving grace for an entire race of people. When I learned that she was not of Mexican descent, I knew the direction before it was revealed in the movie. We are who we believe we are in our hearts. When she disappeared, I wasn’t surprised. In that instant, the possibility of becoming a collective people that could blur the lines of separation was born.

The humor in this film was purposely simple. Its premise was totally obvious. It was an uncomplicated movie about very complex issues in this country. It is undeniable that Mexicans and Hispanics are one of the hardest working forces driving the American economy. It is also undeniable that they are the least respected, revered or compensated for their contributions. The lack of appreciation towards a huge segment of the population that watches our kids, cooks our food, works in sometimes brutal conditions for long hours and for inadequate pay, is appalling and disgraceful.

We owe these people so much and if they all decided to walk out on us, we would deserve it. Chaos would indeed ensue while we figured out how to take as good care of ourselves as they have done for so long. Even though the ham-fisted humor in this movie was not very entertaining at times, it made it easier see our own contribution to the human condition of Mexicans and Hispanics without the veil of special effects or complicated story lines. They have earned considerably more than they’ve received and deserve better than they’ve been subjected to. I have most definitely been educated. Your grade on this report is 50/50. Great job!

A Day Without a Mexican Reaction Paper. (2017, Jan 12). Retrieved from https://studymoose.com/a-day-without-a-mexican-reaction-paper-essay 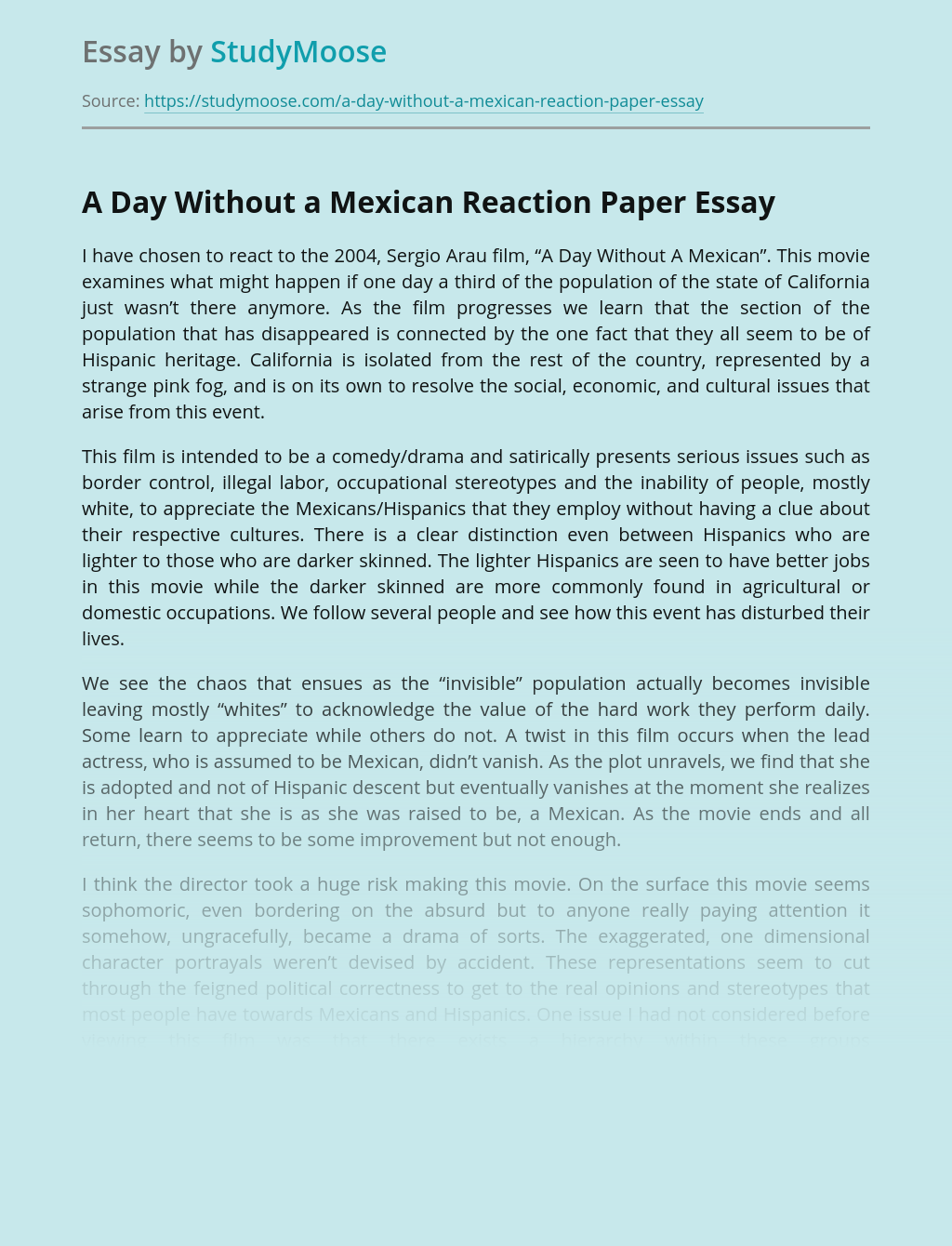 Turn in your highest-quality paper
Get a qualified writer to help you with
“ A Day Without a Mexican Reaction Paper ”
Get high-quality paper
Helping students since 2015
Stay Safe, Stay Original