A critique essay on plagiarism

Plagiarism has become an issue of great concern. Gladwell in his article “Something Borrowed” discusses this issue through multiple aspects of a question so as to present a clear understanding of the intellectual property. Gladwell’s narration follows after his work is plagiarized in a Broadway play, “Frozen” written by Lavery. The play had the main character based on Lewis’s life who had been featured by Gladwell in a magazine profile “Damaged” . Dorothy Lewis was a psychiatrist, and she had been angered by Lavery’s move to use her life in order to create the play’s .

Don't use plagiarized sources. Get your custom essay on
“ A critique essay on plagiarism ”
Get custom paper
NEW! smart matching with writer

Through the multiple aspects, Gladwell advocates against excessive intellectual property since it’s a hindrance to creativity. However, he also makes it clear that people need to be aware of plagiarism. The ideas related to the issue of plagiarism are presented to the reader through the rhetorical strategy of multiple positions. The readers are encouraged to reconsider the intellectual property. Gladwell employs different view points based on Lewis, Lavery, as well as his own opinion about plagiarism.

Gladwell recognizes how indiscriminate plagiarism can be, and discusses the implications that may emanate from it.

For instance, his comments, “I was sitting at home reading the play and I realized that it was. I felt robbed and violated in some peculiar way. It was as if someone had stolen? I don’t believe in the soul, but if there was such a thing, it was as if someone had stolen my essence” (Gladwell 314). Lewis seems to be affected by Lavery’s play use of her life to create a main character.

.Gladwell exposes a positive attitude towards this case of plagiarism when he says that he saw his work as a source of inspiration for Lavery’s work.

In this paper, the rhetorical strategy used by Gladwell to present the multiple aspects of a question in understanding the issue of plagiarism effectively will be discussed. A critique will be given on the article by putting into consideration Gladwell’s style and organization in the article. Discussion To begin with, I would like to say that Malcolm Gladwell’s rhetorical strategy to present multiple aspects of a question in order to ensure to promote an understanding on the issue of plagiarism in the article “Something Borrowed” is effective.

The strategy makes it possible for Gladwell to present his own opinion and ideas to the readers, while at the same time triggering the reader’s thoughts about the issue. For instance, after he discovers that Lavery had used his work without recognizing him, he ha a positive attitude towards the case despite feeling violated. He writes a mail to Lavery saying, “I am happy to be the source of inspiration for the other writers, and had you asked for my permission to quote-even liberally-from my piece, I would have been delighted to oblige.

But to lift material without my approval, is theft” (Gladwell 316). Gladwell presents his view that though Lavery had copied his work; he recognized that it had acted as a source of inspiration for her work. He presents a negative opinion towards plagiarism when he states that he felt violated and robbed after discovering that Lavery play had copied his work . Lewis’s disappointment is used as a good example of the negative effects of plagiarism in a person’s life, and her negative feelings and her actions are discussed by Gladwell to help the readers to acknowledge how damaging plagiarism can be.

Lewis feels that her life has been ruined which motivated her to hire a lawyer who would question the play. Gladwell’s style and organization in the article allows him to discuss the positive aspect of Lavery copying his work. He says that though he had felt violated and robbed, he felt privileged that Lavery had used his work as the base of her play. I think that Gladwell was correct in his reasoning and appreciation. Sometimes other writers borrow from us because they are inspired by our work. For example, he says in the article.

“On some level, I considered Lavery’s borrowing to be a compliment”. He asks, “But how would I have been better off if Lavery had disguised the source of her inspiration? ” Gladwell uses the article to present different views about intellectual property. While he understands Lewis’s anger about the play, he also finds it strange that Lewis would request to be assigned the copyright to Gladwell’s article to aid her in the law suit. When he goes through a copy of “Frozen”, Gladwell comes to appreciate that his words had been used for a good cause.

Gladwell uses examples from the music industry as an affective way of convincing people that they should reconsider their opinion about intellectual property. The life’s experiences are very instrumental in giving us a clear understanding about an issue. Therefore, I support Gladwell’s decision to do this One example is a controversial case between the Beastie Boys and Newton. The case’s outcome was a prove that copying another person’s work can be allowed to a certain level. A New York music professor remarks supports this view, “It’s no more than a mordent, a turn.

It’s been done thousands upon thousands of times. No one can say they own that”. Newton’s accusations against the Beastie Boys that they had copied another persons work is said to hold no water since it was trivial. By focusing on the intellectual property doctrine, Gladwell gives us an insight into copying of work. He states that, the intellectual property doctrine does not provide an accurate situation of the ethical principle that one should not steal. Stealing is allowed by the doctrine based on how much work a person copies. The protection of copyrights is time limited, a notion that I fully agree with.

Gladwell asks, “So is it true that words belong to the person who wrote them, just as other kinds of property belong to their owners? Actually, no”. He uses the opinion of a Stanford Law Professor to that referring to a copyright as property is misleading. Intellectual-property extremism may also be experienced in literature, according to Gladwell. He compares this to the extremism that has been seen in the business world, where owners on patents use them for their own private interests. The ethical rules in literature advocate against any copying, not even that of a few words.

An experience that Gladwell has with his friend who is in the music field supports the view that copying can be accepted only up to certain levels. Gladwell uses this experience explain two aspects in which we can look at copying. Though copying needs to be condemned, it should be seen as a creative process. While true copying should not be allowed because it inhibits creativity, over vigilance in creative expression policing is not necessary. Gladwell experience with Lavery assists us to understanding how borrowing can be done in the right way.

Recognizing the difference between borrowing that is merely derivative, and the one that is transformative is vital when it comes to understanding plagiarism. It is people’s lack of knowledge about this difference that made them look at in Lavery’s work as an offence. The people did not seek to know why and what Lavery had copied, as well as the purpose of copying. In addition, Gladwell’s conversation with Lavery provides the readers with some of the reasons why copying may be done. For example, Lavery explains her actions by saying that she had wanted to be accurate .

That was why she used Gladwell’s work in her work. Despite the justification, Gladwell seems to wonder why Lavery did not credit him and Lewis for their work. Creativity is used by Gladwell to explain how copying can be used appropriately. He approves Lavery’s use of his work as the building block for her work. He asks, “Isn’t that the way creativity is supposed to work? ”. To him, it’s not a problem when old words are used to create new ideas. The problem comes in when new words are used to represent old ideas. Gladwell explains that Lewis’s anger did not emanate from Lavery’s plagiarism.

Instead, she had been angered by the changing of her story and art since the use of old words for a new idea is as unsettling and hurtful just like plagiarism. Gladwell finalizes his article by using irony. He is surprised that the journalists in criticizing Lavery’s work copied her work. They copied from Lavery the same words that Lavery had copied from him, “The difference between a crime of evil and a crime of illness is the difference between a sin and a symptom”. Conclusion Plagiarism in literature is considered wrong and unacceptable.

The writers hold the opinion that any writers work should be completely new. However, this is stated in the article to be the dishonesty of those who can be considered as plagiarism fundamentalists. There is need to recognize that create property goes in a cycle, and the chains of influence as well as evolution in literature exists. This provides writers with an opportunity to borrow from others and use it for a good purpose. Works Cited Gladwell, Malcolm. Something Borrowed . 2004 http://www. gladwell. com/2004/2004_11_25_a_borrowed. html Accessed on September 23, 2008

A critique essay on plagiarism. (2016, Sep 02). Retrieved from https://studymoose.com/a-critique-essay-on-plagiarism-essay 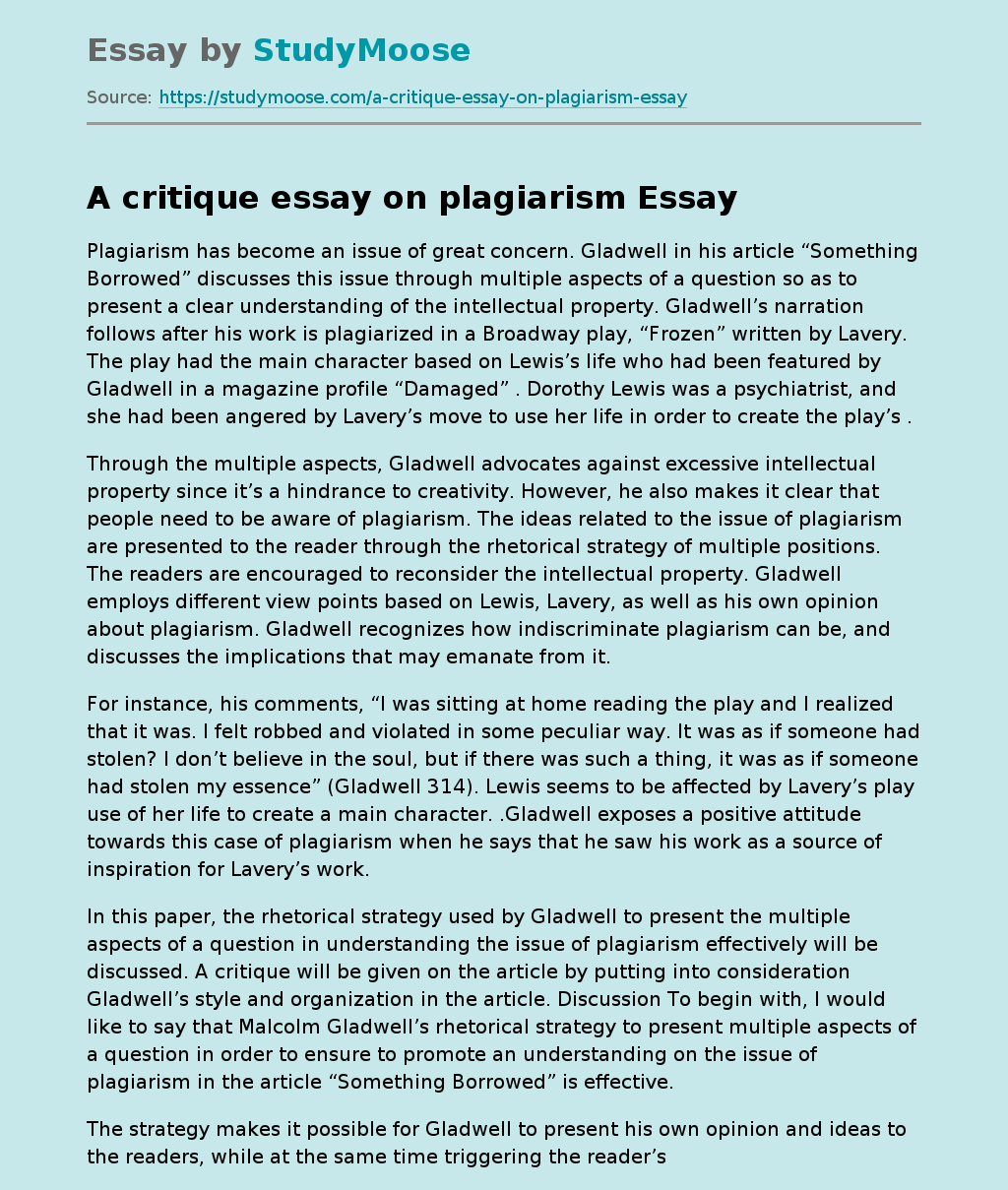