Plagiarism and a Students Writing

Plagiarism is considered stealing another person’s writing and making it one’s own. In the following, a student has plagiarized an original source from another author. Two sentences will be depicted from this passage and cited accurately using APA standard format. Recognizing and avoiding plagiarism is possible in own writing and will be discussed. The goal of writing is to use own words explaining one’s thoughts and ideas regarding prior reading. This will lead to writing success.

Plagiarism and a Students Writing One of the most privileged honors about writing is that the work is of the author’s own.

Don't use plagiarized sources. Get your custom essay on
“ Plagiarism and a Students Writing ”
Get custom paper
NEW! smart matching with writer

Students are often misled or misunderstand how to properly cite or rephrase the work of another author. Academic dishonesty can lead to serious disciplinary action, if not court (Ross, M., 2013). According to the Study Notes for Walden University, Course CFSY 6001, instructor Michelle Ross (2013) states that according to Walden University Student Handbook in 2004, plagiarism consists of copying passages from works of others into any writing prose that a student conducts; using any writing from any author without permission; and rephrasing an author’s original work without prior authorization.

A student had written a short prose based on research from another author. For the lack of better effort, the student had plagiarized this author’s writing making it the student’s own. A sample of both the author and the students papers are presented. Two sentences from the passage will be cited using the American Psychological Association format of properly citing references will follow.

Recognition and avoidance of plagiarism is very important when writing own papers. Finally, if you upload paper to check for plagiarism to ensure there is no discrepancies, it would serve in the your best interests for the future.

Authors Original Writing The student had read this writing from the original author, Crossen C.(1994) who wrote Tainted: The manipulation of fact in America. New York: Touchstone, pp. 166-167. “Doctors, whose first allegiance is supposed to be to their patients, have traditionally stood between drug company researchers and trusting consumers. Yet unless there is evidence of misconduct (the deliberate misrepresentation of something as fact by someone who knows it is not), it is very difficult to discover and virtually impossible to prove that a piece of biomedical research has been tainted by conflict of interest.

No study is perfect, and problems arise in the labs of even the most conscientious and honest researchers. Although biomedical research incorporates rigorous scientific rules and is often critically scrutinized by peers, the information can nevertheless be warped—by ending a study because the results are disappointing; changing rules mid-study; not trying to publish negative results; publicizing preliminary results even with final and less positive results in hand; skimming over or even not acknowledging drawbacks; and, especially, casting the results in the best light or, as scientists say, buffing them,” (Crossen, 1994, p. 166-167). Students Writing Referencing Original Author

The student, in attempt to avoid plagiarism, had in fact wrote: “Consumers must trust that the research that has gone into the manufacture of new drugs is safe. But it is hard to know if a conflict of interest between doctors, researchers, and the drug company stockholders has tainted the results. Biomedical researchers incorporate strict rules of science into their work, which is examined by peers. Yet the resulting information can be warped for five reasons: ending a study too soon, not publishing negative results, publishing results too early, skimming over or ignoring drawbacks, and “buffing” the results by showing them in the best light (Crossen, 1994, p. 167).” The Description of Students Plagiarism

There are three reasons that the student plagiarized. The student had only changed a few words around but borrowed words from the original author. The student did not properly cite the material making it seem as if it was owned. The writing the student wrote seemed to be of own opinion rather than belonging to the original author. Two Sentences Student Wrote Rewritten Using APA Standard Format Two particular sentences that the student wrote which has caught my eye as plagiarism are as follows, 1. “But it is hard to know if a conflict of interest between doctors, researchers, and the drug company stockholders has tainted the results.”

This sentence can be rewritten such as, “According to Crossen, (1994), it is hard to know if a conflict of interest between doctors, researchers, and the drug company stockholder has tainted the results. (p. ?)” 2. “Yet the resulting information can be warped for five reasons: ending a study too soon, not publishing negative results, publishing results too early, skimming over or ignoring drawbacks, and “buffing” the results by showing them in the best light.” Similarly, the student could have written this sentence as follows, “According to Crossen (1994), the information can be distorted for five reasons: ending a study too soon, lack of issuing negative results, publishing results too soon, ignoring pitfalls, and polishing the results (p. ?).” How to Recognize Plagiarism

According to Indiana University (2013) and Walden University (2013), recognizing plagiarism is noticing atleast two things in an student’s writing. First, check to see if the student is using own opinion or citing the original author’s work. If no references are used in APA format, then it is considered plagiarism. Second, check the original author’s work and compare and contrast the it with the student’s writing. If a few words have only changed and few data was changed out of sequence, then it is considered plagiarism. How to Avoid Plagiarism

According to Walden University (2013), to avoid plagiarism, students need too understand the American Psychological Association (APA) format on how to correctly cite or rephrase references during own writing prose. According to the Wells Library Information Commons at Indiana University (2011), strategies to avoid plagiarism include placing quotations around all wording used from the reference, rephrase the entire sentence, paragraph, or paper using own words without adopting words from the original author. Finally, when paper is completed, send it in to a plagiarism checker to ensure that there is none.

Conclusion The student plagiarized the original author’s writing due to changing a few words around, changing a few sequences, and not properly citing references. To avoid plagiarism, it is best either write a summary in own words and then compare to original author or place all things in quotes citing reference with author’s name and date. When the paper is completed, all errors checked, comparisons to original author is finished, the best next thing to do is send the paper to a plagiarism checker. Walden uses Turn-It-In for that purpose.

Plagiarism and a Students Writing. (2016, Sep 29). Retrieved from https://studymoose.com/plagiarism-essay 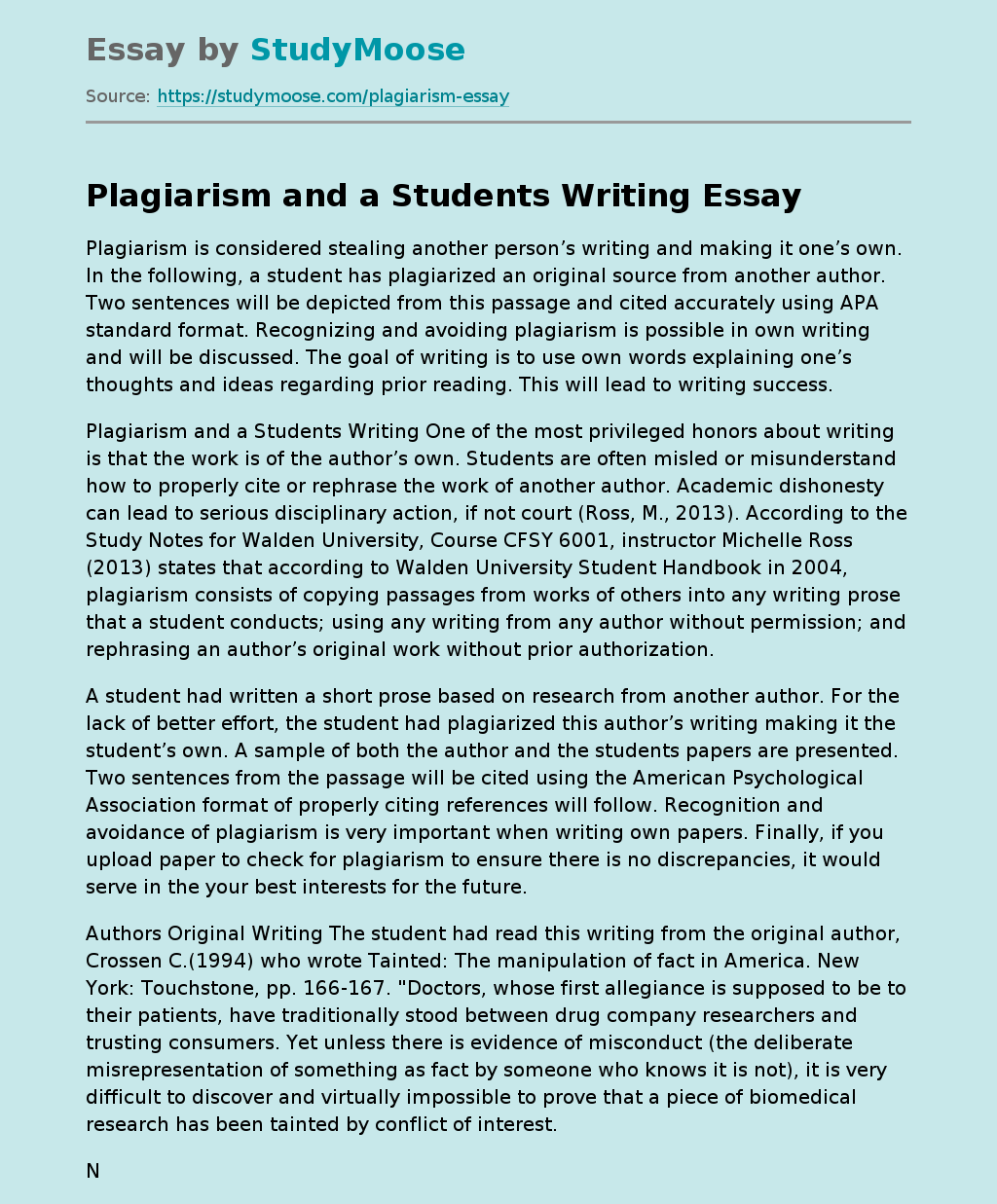