President’s Theodore Roosevelt and Woodrow Wilson served as the 26th and 28th President of the United States respectively. Roosevelt and Wilson represented different political parties; Republican and Democrat respectively, and while they did share some similar policies, the two men served in different political climates. This essay will highlight their major contributions to the nation and highlight their similarities and differences.

“Nothing in this world is worth having or worth doing unless it means effort, pain, difficulty.” (Roosevelt, Theodore, 1910) Theodore Roosevelt became the youngest President at the time on September 14, 1901, following the assassination of William McKinley.

Don't use plagiarized sources. Get your custom essay on
“ A Comparison of the Similarities and Differences Between Theodore Roosevelt and Woodrow Wilson and Their Major Contributions to America ”
Get custom paper
NEW! smart matching with writer

At nearly 43 when he assumed office, Roosevelt had already lived a life full of achievements. He served during the Spanish-American war as a Lieutenant Colonel of the Roughrider regiment, garnering fame leading the charge during the battle of San Juan, his conspicuous gallantry contributed to his reputation as a man even before entering office. He lived on his ranch in the Dakota territory, following the death of his mother and first wife Alice Lee Roosevelt, which happened on the same day.

While there he drove cattle, hunted big game and pursued and captured three outlaws through the badlands after they had cut his boat loose and stolen it. Finally, in 1898, Roosevelt was selected as a candidate for New York state governor, and subsequently was elected and served with distinction.

d.) Thomas Woodrow Wilson assumed office as the 28th President of the United States in March of 1913. Prior to entering office, he served as Governor of New Jersey, and President of Princeton University, where he had previously attended while it was known as the college of New Jersey. He was the last President to travel to his inauguration in a horse-drawn conveyance. During his time in office, he led the United States through World War One, initially professing American neutrality, but after the Zimmerman telegram was discovered attempting to persuade Mexico to align with the Germans against the US, Wilson asked Congress to enter the war against Germany. President Wilson elected the first Jewish person, Louis Brandeis, to the Supreme court, who was confirmed to the Senate in 1916.

Each President made great contributions to the United States, however, the manner in which they carried out their policies differed. Both had served in numerous forms of local and government prior to entering the presidency. The two men did agree on matters of policy, specifically expansion of America’s sphere of influence. Both made advances in the business and trade realm, specifically to the railroads of the United States, Roosevelt regulated the rates, while Wilson established an eight-hour workday. Each also made contributions in Latin America, with Roosevelt establishing the Panama Canal and Wilson seized the Port of Veracruz in reaction to Mexican revolutionary Pancho Villa. Foreign policy was a common thread among the two with Roosevelt establishing the Roosevelt Corollary to the Monroe Doctrine, which allowed America to intervene on the behalf of lesser equipped nations in the Western Hemisphere, while Wilson maintained troops in Central and Latin America.

Both Presidents became wartime leaders with Roosevelt ceasing the Russo-Japanese war, for which he was awarded the Nobel Peace prize, and Wilson’s decision to enter World War One was one of the determining factors in the allied victory. After the war Wilson’s Fourteen Points plan led to the establishment of a league of nations and levied penalties against Germany with the treaty of Versailles.

National resources are another area where the two presidents displayed similarities. Roosevelt set aside lands under federal protection, and Wilson established a national park service. The latter of which celebrates its centennial this year. Each had a different approach, but had interests in common, not the least of which was the continued prosperity of the US and its organic resources.

The two men differed greatly personality wise, with Roosevelt being a more brash type, characteristic of his war hero status, while Wilson was reserved in his approach to foreign policy. Despite these differences in approach the two made rather similar achievements in the global scheme of affairs. Legislation wise, Roosevelt made more effort in conservation of environmental resources, and health reform, while Wilson tended more towards economy and finance.

Roosevelt tended more towards a direct approach to defense, championing a strong military, while Wilson took more of a wait and see approach. Even after World War One had begun, Wilson quite reservedly sought to keep America out of the war. It was only after the previously mentioned Zimmerman Telegram was discovered that Wilson asked Congress to enter the war. Roosevelt, more than likely would have charged in, proverbial guns blazing, however, that is given to speculation and I am not here to second guess history, but rather to compare hat actually resulted from each man’s governance. The fact remains that each President’s actions ultimately resulted in peace, and as is often said, the ends justify the means.

One particular area where the two presidents differed was on that of segregation. Given, this was early 1900’s in America, racial reform was something to come some fifty years later, however, Roosevelt was the first president to invite a colored to the White House, Booker T. Washington. After the dinner, there was such an uproar, there was not another person of color in the White House for another thirty years. Of interest the National Association for the Advancement of Colored People (NAACP), was established in 1909 during Roosevelt’s tenure in office, but in sharp contrast, it was Wilson that established the Jim Crow statutes into federal legislation, legalizing separate facilities for colored persons. Some of these included requiring pictures to accompany applications for employment. This certainly ruled out any employment for colored persons, and moved those already in employ, specifically of the US Postal service to dead letter offices where they would be free of public contact. Of specific interest on this topic, is Wilson’s involvement in the resurgence of the Ku-Klux Klan. What I mean by this, is that a former classmate and friend of the President, Thomas Dixon, wrote a book called “The Clansman”, of which the film “Birth of a Nation” was based. This movie was screened in the White House. More significantly it was the first film to be shown there. This is evidenced in Wilson’s book, A History of the American People, where he is quoted,” The white men of the South were aroused by the mere instinct of self-preservation to rid themselves, by fair means or foul, of the intolerable burden of governments sustained by the votes of ignorant negroes and conducted in the interest of adventurers.” (Wilson, Woodrow, A History of the American People,1902). Given the times, this is not surprising, however, it is a difference that can be drawn between the two men.

President’s Roosevelt and Wilson both made significant contributions to America both domestically and internationally. Each man will long be remembered as some of the finest leaders of their respective times, guiding our nation through times both troubling and developmental in nature. Of this there is no doubt. Both men were progressive in nature, with each striving to ensure the United States remained relevant.

The manner in which each governed differed based on the particulars of their time. It can be said that each faced different challenges, which is true. It can also be said that they produced similar results, which is also true. Both presidents rose to the occasion and left the office in an improved state, better than what it was when they entered.

A Comparison of the Similarities and Differences Between Theodore Roosevelt and Woodrow Wilson and Their Major Contributions to America. (2021, Oct 11). Retrieved from https://studymoose.com/a-comparison-of-the-similarities-and-differences-between-theodore-roosevelt-and-woodrow-wilson-and-their-major-contributions-to-america-essay 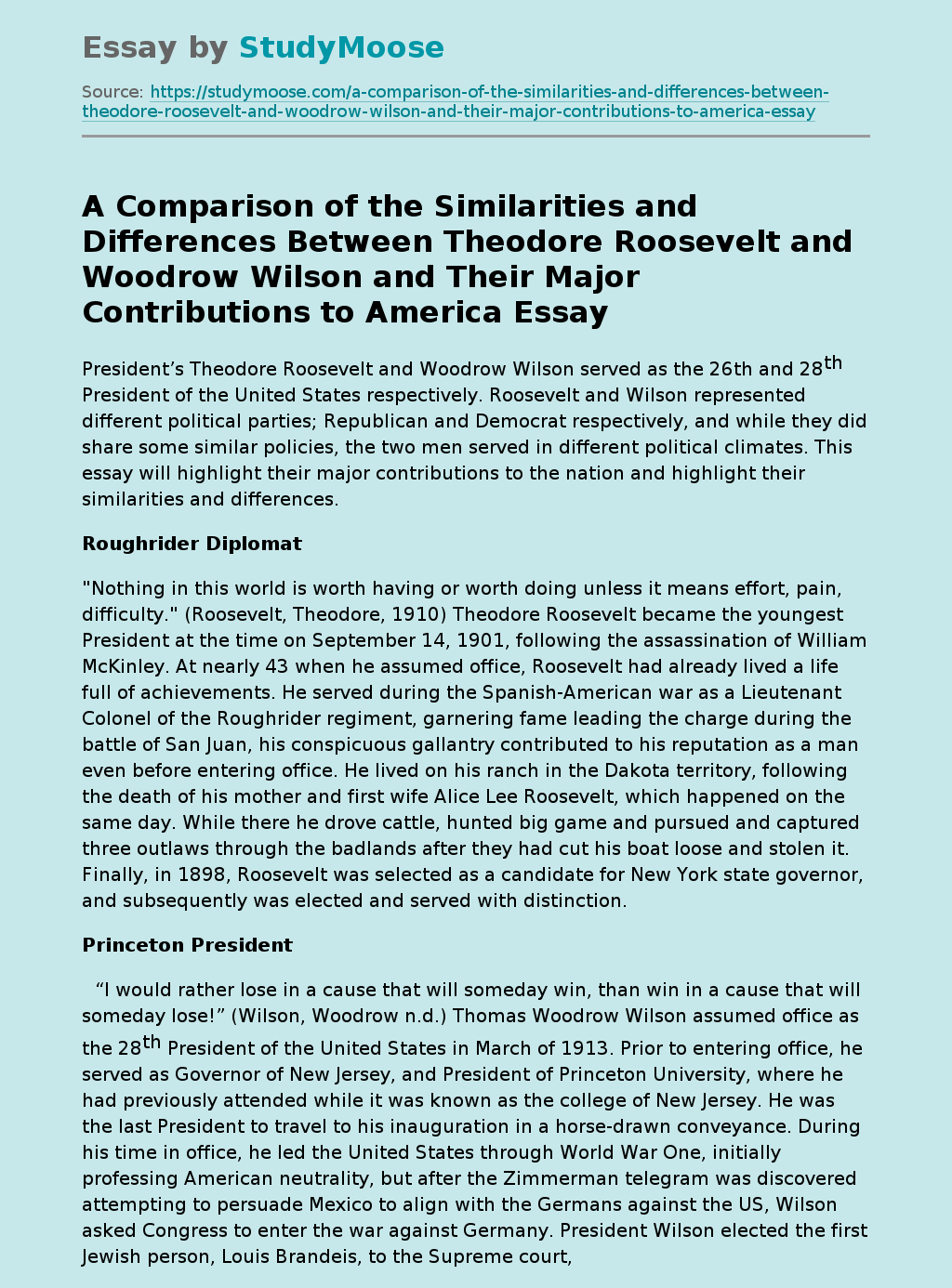