The United States has long been considered one of the mightiest nations in the world following decisive victories in both World War One and World War Two. Our relatively young nation in the scheme of other world powers ably entered and made decisive action in numerous conflicts and regional skirmishes. Both times the entire world was engulfed in the flames of conflict our nation carefully weighed both sides of the conflict prior to entering the fray. There are both similarities and differences when considering the circumstances that determined the fate of thousands of American service members in both the world wars.

Don't use plagiarized sources. Get your custom essay on
“ A Comparison of the Similarities and Differences Between the Victories of the United States in World War I and World War II ”
Get custom paper
NEW! smart matching with writer

To me, the primary difference that determined entry into conflict is that in World War two, the United States was attacked prior to entering. The Japanese attacked Pearl Harbor on December 7th 1941 with a ferocity and surprise that sent the nation reeling in shock and a certain amount of nationalism that had not been experienced before. Not even in the Revolutionary War had there been an attack by the British that matched the destruction and chaos as Pearl Harbor.

If we had not responded by entering the war and choosing to decide with the Allies, there would have almost certainly been further incursions towards the U.S. mainland.

Consider the entrance into World War one, which was precipitated by the attack on the USS Lusitania. Not to downplay the destruction caused by this attack, while not a U.S. Ship, however Americans were killed in the attack, which, the Germans maintained was carrying munitions.

Subsequent attacks followed as the Germans had declared open warfare on any ship in International waters.

The two wars were fought very differently, in that WW1 was primarily a trench war, with direct Soldier to Soldier conflict in close quarters, whereas WW2 was more of a regional broad-based war. The US was involved in several theaters at once with troops committed to Asia, Europe, and Africa at the same time in WW2. WW1 was almost solely isolated to the European theater.

In both wars, President’s Wilson and Roosevelt sought to remain neutral regarding U.S. involvement. In each case the U.S. offered assistance to Allied forces, but did not participate directly in the hostilities. Eventually though, each President chose to appear before Congress and request permission to enter the wars.

Another similarity between the two wars was that until Pearl Harbor, there had been no direct attack on U.S. interests, and this made it easier for Americans to consider themselves safe. Neutrality was an easy concept to consider, as many Americans considered the distance between the European theater and America to be too far a bridge to gap. Air travel was gaining prominence but it was nowhere near where it is today.

WW1 was a direct contributor to WW2. Germany’s defeat in the war and the following conditions of the Treaty of Versailles, and economic reparations levied against them weighed heavily on them. The economic depression weighed heavily upon the German people, just as it did upon the people of the United States. These two countries were effected the most following World War One. It is no surprise that when Adolf Hitler made his play for Chancellor that we won the people over.  The difference being with America’s case that we chose to enter the war to prevent atrocities, rather than cause them.

Following World War One, America enacted a policy on impartiality and neutrality in both transport and participation. These were known as the Neutrality Acts. These were due in part to guilt felt on the part of Americans for their involvement in WW1. Beginning in 1935 and continuing to their dissolution in November of 1941, America followed these edicts, which restricted trade of munitions to so-called belligerents, and allowed trade of arms to opponents of the Axis powers on a cash and carry basis. The sales of arms were permitted; however, transport was not provided for these sales.

In September of 1939, Germany invaded Poland and World War two officially began. German forces decimated their neighbor, with their new type of Blitzkrieg warfare. The Polish seriously underestimated the resolve of the Germans and were swiftly defeated, and occupied. Following this, the Allies-Britain and France called for increased aid from their American friends. Roosevelt held fast to the Neutrality act, and resisted involving our nation in war. The thought was that if we continued to aid our allies, it would negate the need to enter the hostilities ourselves. U.S. Public opinion supported Britain over Germany in this new conflict, although many still opposed entering war following World War One. This was echoed in the military as George C. Marshall, the Army’s Chief of Staff believed that Britain would be defeated following the inevitable fall of France. He preferred to reserve the supplies for defense of the Western Hemisphere rather than have the supplies fall into enemy hands.

Despite the resistance, Roosevelt continued by trading fifty obsolete destroyers to Great Britain in exchange for land in Newfoundland and the Caribbean that would be used as bases for American interests. These interests, would be highly beneficial to the United States in years to come, serving much more than monetary ends. Initially, Churchill desired to have these items given as gifts, but Roosevelt knew the American public and Congress would not accept this, which led to the deal for trade. Long-term defense of the Western hemisphere would assuage both the public and the military. Churchill warned that he could not pay for the supplies given to aid them.  Roosevelt went before Congress and after much deliberation, was granted the permission to aid the allies with requested military aid. Roosevelt named this package of aid the “Lend Lease”. It was so named because, rather than having the supplies paid for in dollars, repayment would be in the form of considerations to the United States. This process could be mutually beneficial to both parties in addition to bolstering the friendship the two nations already shared. Great Britain was not the sole recipient of aid by the Americans; all-told the U.S. contributed in excess of fifty million dollars to numerous countries in assistance in their fight against Nazi Germany. Although, altruism was the outward appearance, and as Winston Churchill termed our aid as “the most unsordid act one nation had done for another”, our benefit to other nations served a secondary means; that of maintaining the at-the-time highly sought neutrality in the war.

As with most acts, however, they must eventually come to an end. The early morning attack by the Japanese on Pearl Harbor left the American people no choice but to take up arms in the defense of our nation. As with the American effort during World War One, the entrance of American forces into both the European and Pacific theaters had an effect on the outcome of the war. The decision to enter the war, and definitively stake a claim for the evils committed against humanity came about as Roosevelt appeared before Congress and made the request to commit U.S. forces to the war effort. The neutrality act had been previously repealed by Congress in November of 1941, the rest as they say is history.

For the majority of the Twentieth Century, America approached war and international affairs with an appropriate amount of prudence. This served our nation well, and the leaders of the time were generally respected for their restraint and demonstrated consideration. How would the world as we know it be now if our leaders did not practice such planning in their military actions? The question is one that may be asked for many years to come, and the answer is not one that I would like to see answered.

Either learn from the mistakes of history or be forever doomed to repeat them. These are the words that ring in my head at present as America has become embroiled in two of the longest conflicts of recent history. Perhaps a measure of prudence was called for prior to the wars be are currently participating in. These wars have in my opinion desensitized the American public. The American military has expended more resources in Iraq and Afghanistan than in both of the world wars combined, and their involvement has gone on for much longer than any of the leaders who committed us to these actions than anyone predicted.

A Comparison of the Similarities and Differences Between the Victories of the United States in World War I and World War II. (2021, Oct 11). Retrieved from https://studymoose.com/a-comparison-of-the-similarities-and-differences-between-the-victories-of-the-united-states-in-world-war-i-and-world-war-ii-essay 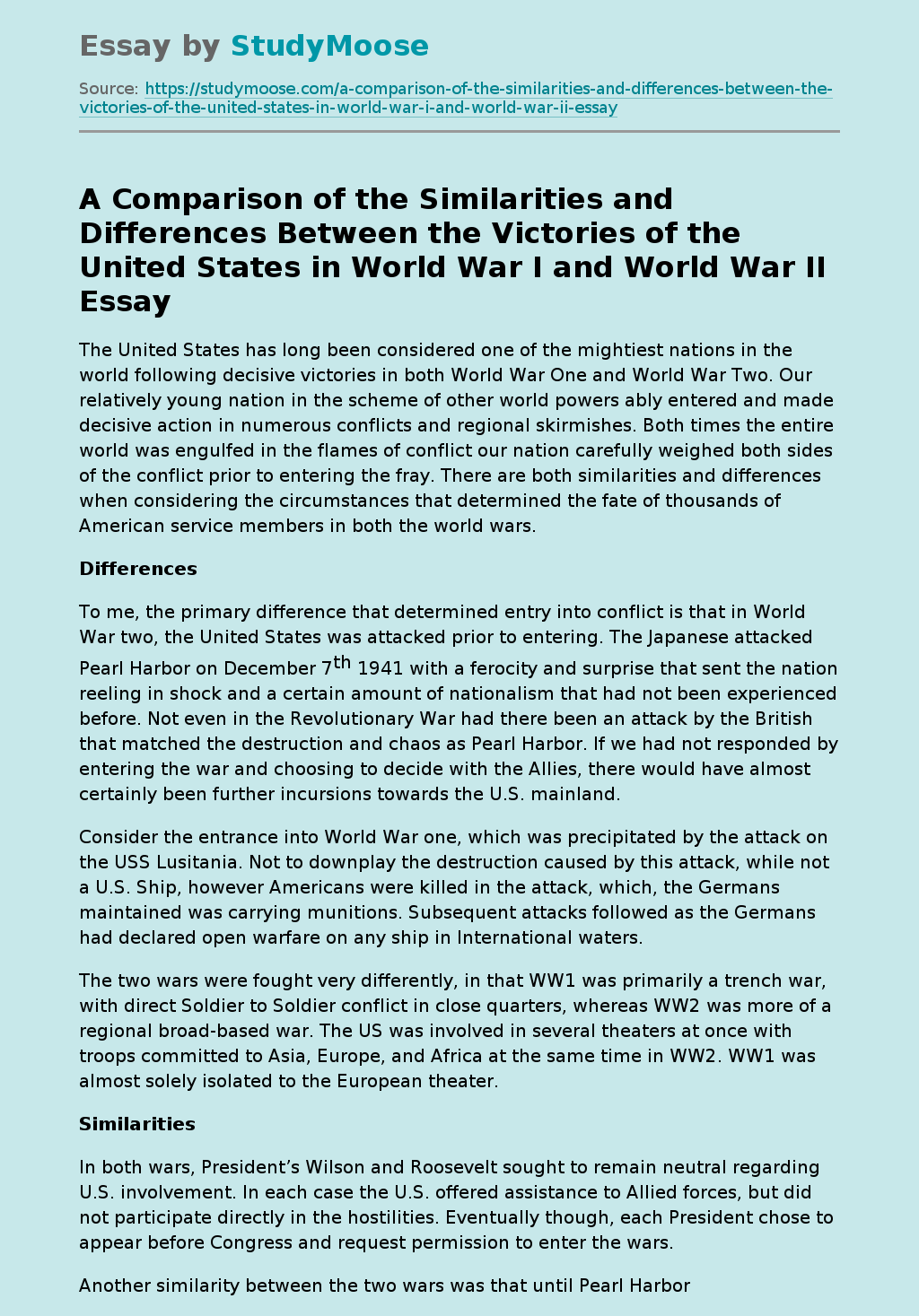