'A Bridge to Wiseman's Cove' by James Moloney

Carl Matt is a 15 year old boy who has had to deal with some pretty unfair situations, but he is definitely not the only one in the novel to face life changing events. Whilst Carls life takes the most noticeable turn in the novel, many of his fellow characters lives also change after his arrival. On arrival in Wattle Beach, Carls journey leads him to the character, Skip Duncan. Skip has also been dealt with unfair life challenges. The fact that Carl is a Matt creates many challenges for Skip.

Turn in your highest-quality paper
Get a qualified writer to help you with
“ ‘A Bridge to Wiseman’s Cove’ by James Moloney ”
Get high-quality paper
NEW! AI matching with writers

Skips daughter, Maddie also changes during the time Carl spends in Wattle Beach. Many characters change throughout the novel but Carl is definitely the most predominant.

Carl Matt changes throughout the novel. Carl Matt is just a shy, sad character at the beginning of the book. In the start Carl was a pushover he just let people keep walking all over him. For example Carl sees Sarah (his sister) planning a holiday for herself, But Carl knew that she wouldnt come back, and he did not say anything.

He just left for Aunt Beryls and made himself think that he was just going away for a holiday. When Carl reaches Wattle Beach he feels like an outcast. He stood up too suddenly and the chair toppled over backward. Faces turned to enjoy the comedy as he righted the chair, his skin reddened with fierce embarrassment.(Quote pg28).

This quote shows that Carl is not a part of a group; he is just a new kid that no one knows or likes.

But after a few weeks a Wattle Beach Carl gets a job, which makes him feel as if he is needed. Carl is constantly evolving in this book, in the beginning Carl wouldnt even dream of talking to Maddie but at the end of the novel Maddie is one of Carls best friends. Carl comes out of his shell at the end and shows Wattle Beach and Wisemans Cove residents who he really is My name is Carl Matt M-A-T-T (Quote pg 231). But Carl defiantly isnt the only one who changes throughout the novel. Carls employer Skip Duncan also changes and in a big way.

When we are introduced to Skip Duncan, we meet a temperamental and gruff man. In the beginning Skip Duncan hates all Matts but Carl Matt is the one who changes his mind. At the start Carl asks Skip for a job but when Skip finds out his last name Skip explodes Matt, the word exploded. Skip turned again to Joy is this some kind of joke? You bring a Matt onto my barge, let him come her asking me for a job! He was shouting by the time he reached the last word, indignation bulging in his face. Get off my barge, he yelled at the boy. (Quote pg 66). Skip explodes at poor Car, when he does not even know what kind of a person Carl is. This leads us to believe that Skip is very judgemental person. Even though in the beginning Skip is very, judgemental he evolves throughout the duration of the novel. By becoming less judgemental and more interested in meeting the person not the last name He stretched out his arm, hand open and Carl took it, a freezing slippery grip lasting not even a second.(Quote pg 133), this handshake even though it may be short shows that Skip has overcome the fact that Carl is a Matt and has accepted him for being CARL Matt.

Skinny, tanned, blonde, Maddie Duncan is the girl that everyone wants to be or be with. But along with being pretty she also has a very bad attitude, but that changes throughout the novel. When we first meet Maddie Duncan we meet a spoilt brat. She has a bad attitude and thinks that everyone loves her. But Carl, Justine and Joy help to change her into a person that people really do like. Thats one advantage Carl and I have over you said Justine Youre lucky then was Maddies reply (Quote pg 150), this quote shows us that Maddie was spoilt and stroppy but after this little episode Joy talks to Maddie and her attitude changes. She was too helpless with laughter and exhaustion to challenge him for the pizza now(Quote pg 181)This quote shows that she has changed into a person that people really do like, she has ditched her attitude and dumped the extra baggage (Nathan Trelfo).

This means she is a freer person and is comfortable within herself, which at the beginning of the novel she wasnt. Maddie also learns to stand up for herself, as she doesnt let Nathan push her around. Shows youre a better judge that me. Maddie laughed He said some terrible stuff about your brother and Aunt (quote pg 154). This shows that Maddie is sick of Nathan and is ready to dump him which she does later in the novel. Maddie Duncan is constantly changing through the story, sometimes for the better and sometimes for the worst. But the most important thing is that her and the people around her are happy.

Carl Matt experiences many life altering changes throughout the novel. However he is not the only one. Skip Duncan grows from being judgemental to being understanding. Maddie develops from a spoilt brat to a loving friend.

So even though Carl Matts life takes a massive turn in the story, Skip and his daughter Maddie also have alterations made to their lives.

'A Bridge to Wiseman's Cove' by James Moloney. (2016, Jul 26). Retrieved from http://studymoose.com/a-bridge-to-wisemans-cove-by-james-moloney-essay 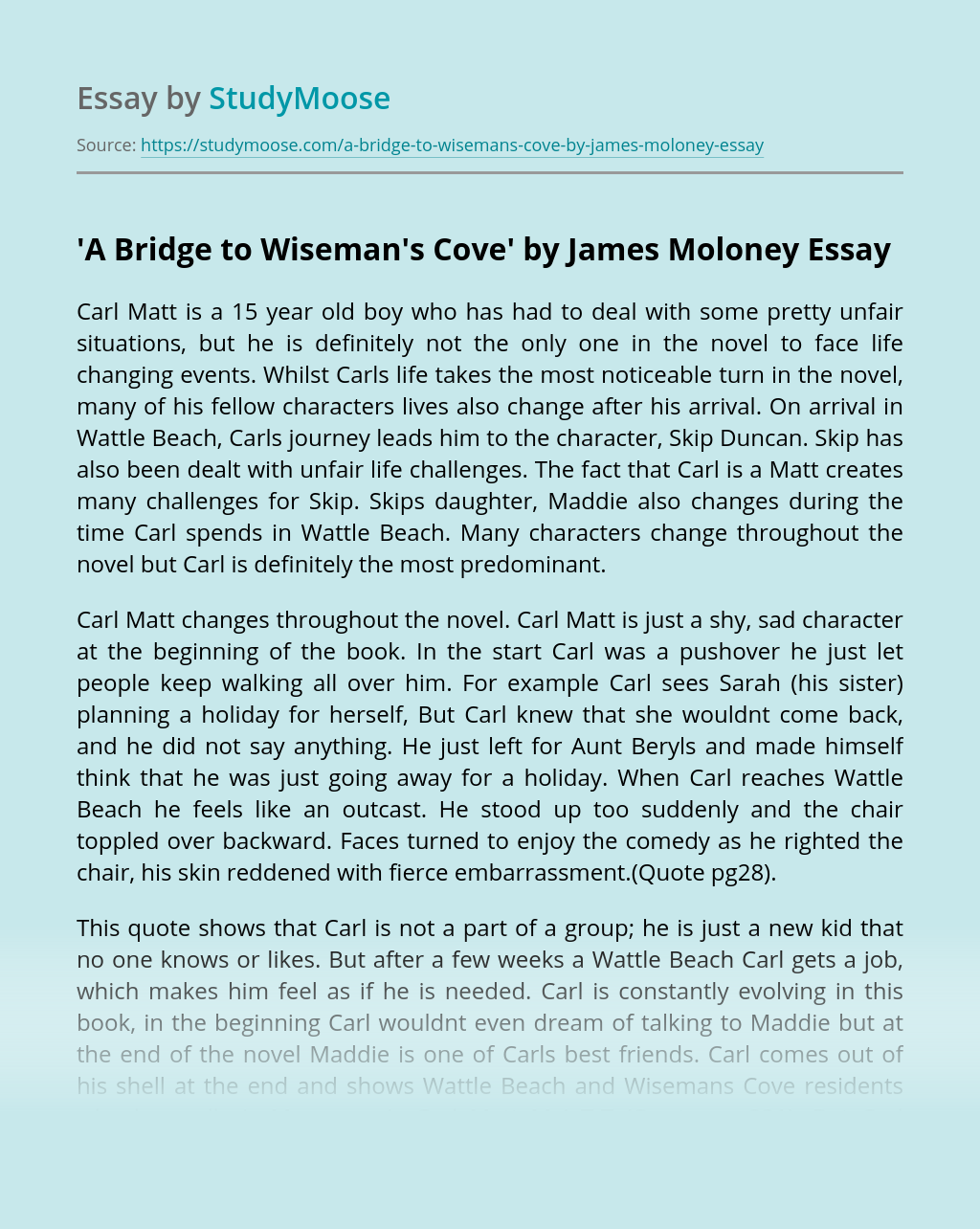 Turn in your highest-quality paper
Get a qualified writer to help you with
“ ‘A Bridge to Wiseman’s Cove’ by James Moloney ”
Get high-quality paper
Helping students since 2015
Stay Safe, Stay Original