John Ronald Reuel Tolkien (1892-1973) was a major scholar of the English language, specialising in Old and Middle English. Twice Professor of Anglo-Saxon (Old English) at the University of Oxford, he also wrote a number of stories, including most famously The Hobbit (1937) and The Lord of the Rings (1954-1955).

The name “Tolkien” (pron.: Tol-keen; equal stress on both syllables) is believed to be of German origin; Toll-kühn: foolishly brave, or stupidly clever – hence the pseudonym “Oxymore” which he occasionally used.

His father, Arthur Reuel Tolkien, was a bank clerk. Mabel Tolkien was diagnosed as having diabetes, usually fatal in those pre-insulin days. She died on 14 November.

By this time Ronald was already showing remarkable linguistic gifts. He had mastered the Latin and Greek which was the staple fare of an arts education at that time, and was becoming more than competent in a number of other languages, both modern and ancient, notably Gothic, and later Finnish. He was already busy making up his own languages, purely for fun.

He went up to Exeter College, Oxford in 1911, where he stayed, immersing himself in the Classics, Old English, the Germanic languages (especially Gothic), Welsh and Finnish, until 1913. As a result of this he changed his school from Classics to the more congenial English Language and Literature.

Unlike so many of his contemporaries, Tolkien did not rush to join up immediately on the outbreak of war, but returned to Oxford, where he worked hard and finally achieved a first-class degree in June 1915. At this time he was also working on various poetic attempts, and on his invented languages, especially one that he came to call Qenya [sic], which was heavily influenced by Finnish – but he still felt the lack of a connecting thread to bring his vivid but disparate imaginings together.

He and Edith married in Warwick on 22 March 1916.Their first son, John Francis Reuel (later Father John Tolkien) had already been born on 16 November 1917.

When the Armistice was signed on 11 November 1918, Tolkien had already been putting out feelers to obtain academic employment, and by the time he was demobilised he had been appointed Assistant Lexicographer on the New English Dictionary (the “Oxford English Dictionary”), then in preparation. While doing the serious philological work involved in this, he also gave one of his Lost Tales its first public airing – he read The Fall of Gondolin to the Exeter College Essay Club, where it was well received by an audience which included Neville Coghill and Hugo Dyson, two future “Inklings”. However, Tolkien did not stay in this job for long. In the summer of 1920 he applied for the quite senior post of Reader (approximately, Associate Professor) in English Language at the University of Leeds, and to his surprise was appointed.

His family life was equally straightforward. Edith bore their last child and only daughter, Priscilla, in 1929. Tolkien got into the habit of writing the children annual illustrated letters as if from Santa Claus, and a selection of these was published in 1976 as The Father Christmas Letters. He also told them numerous bedtime stories, of which more anon. In adulthood John entered the priesthood, Michael and Christopher both saw war service in the Royal Air Force. Afterwards Michael became a schoolmaster and Christopher a university lecturer, and Priscilla became a social worker. They lived quietly in North Oxford, and later Ronald and Edith lived in the suburb of Headington. Meanwhile Tolkien continued developing his mythology and languages.

She asked Tolkien to finish it, and presented the complete story to Stanley Unwin, the then Chairman of the firm. He tried it out on his 10-year old son Rayner, who wrote an approving report, and it was published as The Hobbit in 1937. It immediately scored a success, and has not been out of children’s recommended reading lists ever since. It was so successful that Stanley Unwin asked if he had any more similar material available for publication.

By this time Tolkien had begun to make his Legendarium into what he believed to be a more presentable state, and as he later noted, hints of it had already made their way into The Hobbit. He was now calling the full account Quenta Silmarillion, or Silmarillion for short. He presented some of his
“completed” tales to Unwin, who sent them to his reader. The reader’s reaction was mixed: dislike of the poetry and praise for the prose (the material was the story of Beren and Lúthien) but the overall decision at the time was that these were not commercially publishable. Unwin tactfully relayed this message to Tolkien, but asked him again if he was willing to write a sequel to The Hobbit. Tolkien was disappointed at the apparent failure of The Silmarillion, but agreed to take up the challenge of “The New Hobbit”.

Despite all the fuss over The Lord of the Rings, between 1925 and his death Tolkien did write and publish a number of other articles, including a range of scholarly essays, many reprinted in The Monsters and the Critics and Other Essays (see above); one Middle-earth related work, The Adventures of Tom Bombadil; editions and translations of Middle English works such as the Ancrene Wisse, Sir Gawain, Sir Orfeo and The Pearl, and some stories independent of the Legendarium, such as the Imram, The Homecoming of Beorhtnoth Beorhthelm’s Son, The Lay of Aotrou and Itroun – and, especially, Farmer Giles of Ham, Leaf by Niggle, and Smith of Wootton Major.

After his retirement in 1959 Edith and Ronald moved to Bournemouth. On 22 November 1971 Edith died, and Ronald soon returned to Oxford, to rooms provided by Merton College. Ronald died on 2 September 1973. He and Edith are buried together in a single grave in the Catholic section of Wolvercote cemetery in the northern suburbs of Oxford. (The grave is well signposted from the entrance.) 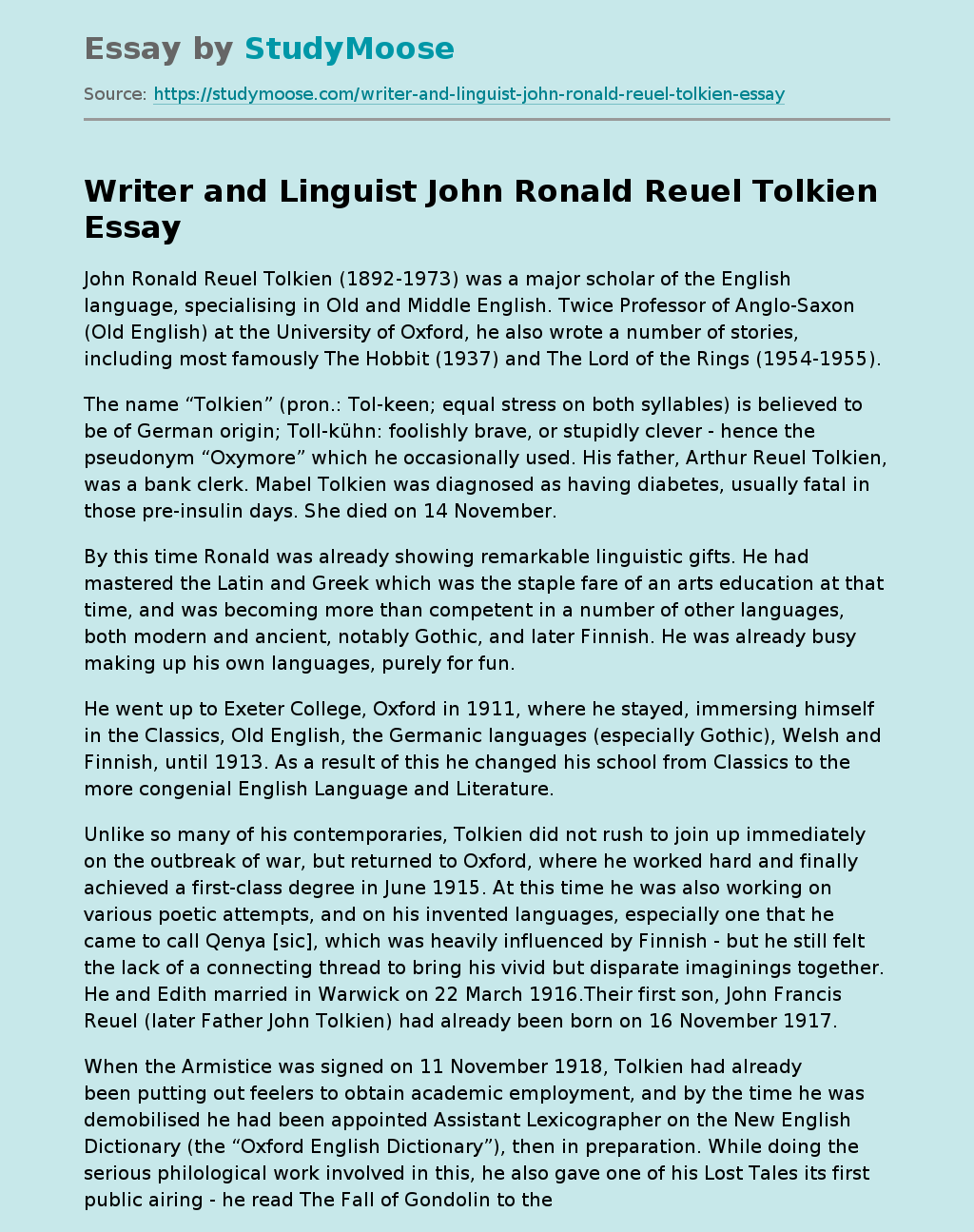