Write a careful comparison of two passages: show how Edmund Talbot's 'rite of passage' develops in the first half of the text

In William Golding’s Rites of Passage we are taken on an adventure told through the journal of the young aristocrat, Edmund Talbot and by a wretched parson, Robert James Colly. Not only does Edmund go on a journey to Australia for the first time but goes through a ‘rite of passage’ himself, along the way.

On the first day of the journey when Edmund arrives into his confined, new environment, he is quite unaware of what life is going to be like on a ship.

Don't use plagiarized sources. Get your custom essay on
“ Write a careful comparison of two passages: show how Edmund Talbot’s ‘rite of passage’ develops in the first half of the text ”
Get custom paper
NEW! smart matching with writer

He is very arrogant in the way that he demands to see the captain as soon as the atmosphere of the ship doesn’t suite his liking.

Edmund steps onto the ship, he is quick to criticise his surroundings showing he is rather naï¿½ve, he does not consider what something is or where it came from but is quick to judge just as he does with Colly, on the second day.

There is much about Edmund which suggest his attitudes are very childish, although he is of high importance compared to the other passengers and would have a servant to tend to him, he does seem to rely on Wheeler as a child would rely on its parent in strange surroundings.

Talbot’s attitude changes greatly during his journey, in the first half of the novel however it switches back and fourth, in some ways it seems as though he is becoming more aware and adaptable to the ways of the sea.

Yet we arrive at day 17 and he is complaining of sea-sickness again.

“…What does it matter. I have suffered again- the colic. Oh Nelson, Nelson, how did you manage to live so long and die at last not from this noisome series of convulsions but by the less painful violence of the enemy?”

And furthermore, in pages 66-67, Edmund gives us his first impressions of the Parson, which seem quite unfair and judgemental. Edmund describes him as,

“Five feet nothing of parson complete with surplice, cap of maintenance perched on a round wig…”

Generally not making him appear to look very good, and at this point the reader perceives the parson as having something rather monstrous or creepy about them.

The idea of the title ‘rites of passage’ is explained greatly I think by the character Edmund Talbot. He does not realize this until later on or even that the journey is a ‘rite of passage’, but as we read on we can see that Talbot does change in his ways. We sort of get the idea that he himself wants to learn, because he tells his Lordship, whom he is writing to, that he is keen to know Tarpaulin.

“I also intend to please your lordship with some choice bits of Tarpaulin language for I begin, haltingly it is true, to speak tarpaulin…”

A major turning point for Edmund is a passage toward the end of the first half of the novel on day 60 where he talks to Anderson, looks back two months and realizes that he was arrogant and foolish. Edmund says

“The difference had been in my mind and I did, in a way I now fear he may have found offensive, discuss the desirability of men being elevated above their first station in life. It was thoughtless of me…”

He tells Anderson that he is a gentleman and from what he had learnt so far from his journey he believes that one person can change class yet he knows himself that he would not have said this two months ago. Here we can see how much Talbot has changed because unlike in the beginning of the novel where he pretty much considers himself to be more important than most of the people on the ship and would not consider such a thing as switching class. He is learning to look within a person and what qualities they hold as a guide to their importance.

Comparing the earlier passages to the later ones there is clear evidence Talbot has changed for the better, and even he realises his uncle has sent on this journey to teach him something. We see him grow almost from a young naï¿½ve arrogant man to a wise and more aware man. I think he realises this toward the end of the passage on day 60 where he writes,

“…I found it more and more in my power to exercise judgment and contemplate action. Those ambitious of attaining t statecraft or whose birth renders the exercise of it inevitable would do well to face the trials of a voyage such as ours!”

In conclusion to this, however it is somewhat difficult to state two particular passages from ‘rites of passage’ to explore Edmund Talbot’s development throughout the novel because maturing has to be carried out over time. And to realise for him that he was arrogant in the past doesn’t happen over night. Various details of his journey make opportunities for him to develop and change, for instance him seeing Colly stumbling around the deck during the storm, he did make fun of him, yet, this made him have strength in himself after seeing someone less fortunate or capable. And again when he sees Colly’s ‘fall’ as It were, when the parson merges on deck drunk and then locks himself away for days leaves opportunity for Edmund to consider him and maybe change his mind about him.

Nevertheless, it can be agreed that there is obvious change apparent in Mr Talbot attitude, he has never been out of his small community back home and is quite inexperienced in his thinking. He sees the ship as a small society which has its upper and lower classes. This is evident from how he uses Colly for his entertainment just as he uses Wheeler for his every need.

At the end of the first half on day 60 at the peck, I think, of Edmunds development where his opinion of Anderson differs from in previous occasions. He and some of the crew see that Anderson must have been awful to the parson because of his power on the ship and Edmund feels warmth that Summers has belief in his ability and confident appeal to a sense of justice. And he no longer sees himself as important but just wants Summers to think he is a good man.

Write a careful comparison of two passages: show how Edmund Talbot's 'rite of passage' develops in the first half of the text. (2020, Jun 02). Retrieved from https://studymoose.com/write-careful-comparison-two-passages-show-edmund-talbots-rite-passage-develops-first-half-text-new-essay 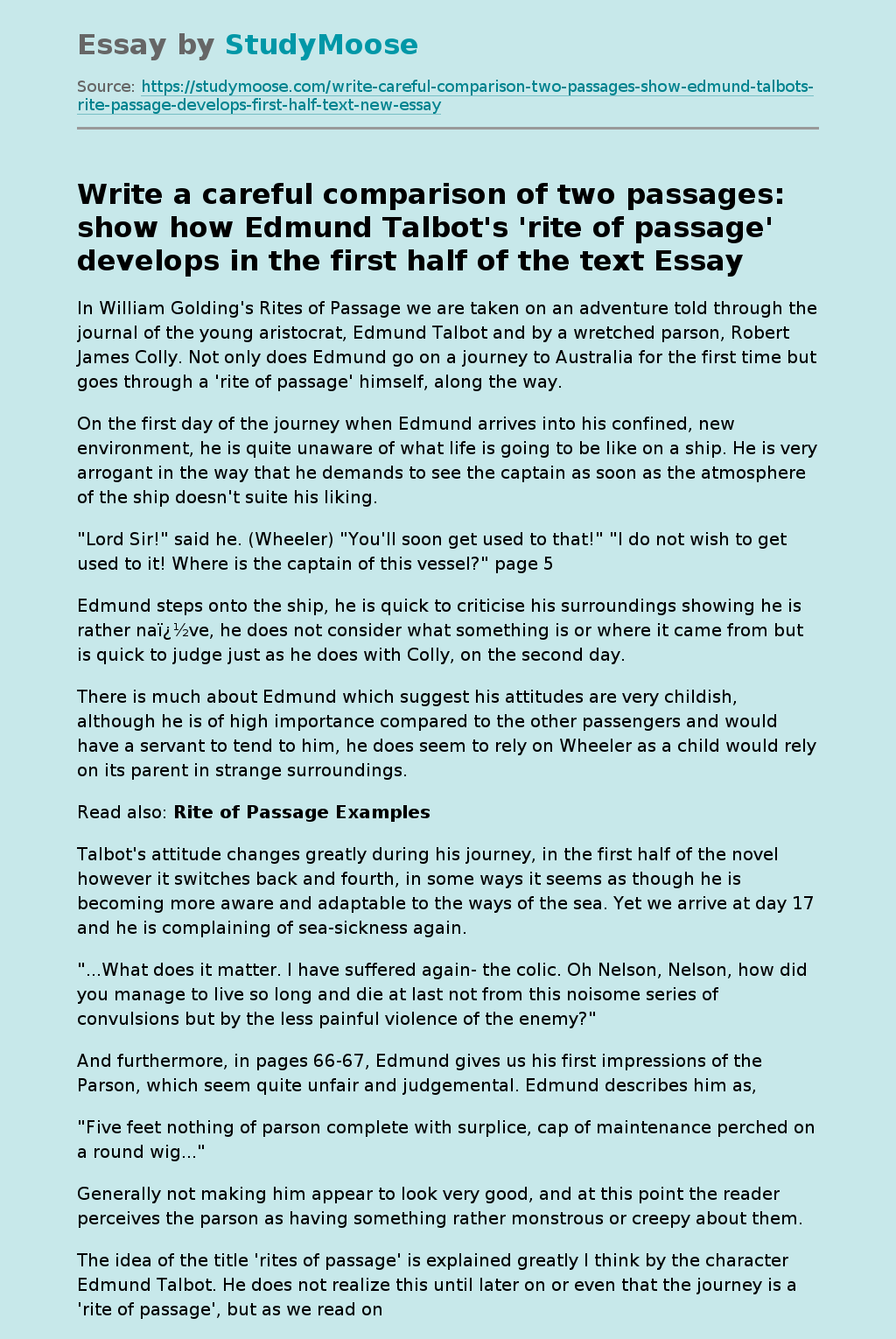