Conflict is an inevitable part of our workday life as different values and points of view can create tension among peers. Conflict is defined as the disagreement among two or more individuals, groups, or organizations. This disagreement may be relatively superficial or very strong (Ventrice, 2000) . It may be short-lived or exist for months or even years, and it may be work-related or personal.

In the Chinese society, traditional culture makes the people trying to avoid conflicts habitually. Furthermore, most Chinese enterprises do not encourage conflicts in the organization.

Don't use plagiarized sources. Get your custom essay on
“ Workplace conflict ”
Get custom paper
NEW! smart matching with writer

Keeping peace is the only solution. As a result, it is easier to hide our anger than to address the problem directly. It is easier to dismiss the anger in others with, “They’ll get over it sooner or later.” The Chinese people are used to avoid or ignore the problem because they do not want to “stir up trouble” (Chen, 2001).

However, when we, the Chinese people, hide our anger, we tend to relive frustrating situations over and over in our heads, and see ourselves as victims (Wu, 2001).

When we see ourselves as victims, we begin to look for ways to retaliate. “She didn’t cover for me when I was out sick. She had better hope she doesn’t get sick right before a crucial deadline!” Thus, when we ignore the small frustrations our coworkers have with us, those frustrations grow.

As a manager, what you have to do is not to avoid conflict, but valid management conflict, make use of the different opinion of the conflict exhumation, stir up more creativities.

Conflict may manifest itself in a variety of ways. Conflict may arise in both interpersonal and intergroup relationships. Interpersonal conflict is when people’s ideas, decisions or actions relating directly to the job are in opposition, or when two people just don’t get along. Intergroup conflict is conflict occurs between two or more organizational groups. Occasionally, conflict between individual and groups may be caused by particular organizational strategies and practices (Hart, 2000). A third arena for conflict is between an organization and its environment.

However, I will be focusing on the interpersonal conflict and use the following story as an example for I will be providing my solutions to manage this conflict.

A usually calm and collected employee storms into his manager’s office, and the manager is thrown into the middle of a conflict, without warning. Charles, normally a rational person, is shouting, “I can’t believe you didn’t do anything about Angela! She’s been telling everyone that I have been stealing toilet paper! They are starting to refer to me as TP Guy. You should have put a stop to this a week ago! You can’t even control your own employees. This is unbelievable!”

I think conflict is a powerful force in organizations, and has both negative and positive consequences. The best three methods I came up with for managers to manage conflicts are stimulation, controlling, and resolving and eliminating.

In some situations, an organization may stimulate conflict by placing individual employees or groups in competitive situations. Managers can establish sales contests, incentive plans, bonuses, or other competitive stimuli to spark competition. Another useful method for stimulating conflict is to bring in one or more outsiders who will shake things up and present a new perspective on organizational practices. The last method is changing established procedures, especially procedures that have outlived their usefulness, can also stimulate conflict. Stimulating conflict can enhance some aspects of organizational performance, but this action also can provoke resentment from employees and destroy the cooperation of organization.

One method of controlling conflict is to expand the resource base. Managers should also try to match the personalities and work habits of employees to avoid conflict between individuals.

First of all, the method of resolving and eliminating conflict is compromise which is striking a middle-range position between two extremes. The manager as a mediator convinces conflicting parties to compromise. Secondly, the confrontation approach to conflict resolution consists of bringing the parties together to confront the conflict and negotiate conflict. The parties discuss the nature of their conflict and attempt to reach an agreement or a solution. Confrontation requires a reasonable degree of maturity on the part of the participants, and the manager must structure the situation carefully (Creelman, 2001).

However, when I read the case, I thought about how I would deal with the case if I were the manager. I think I would take the third way to solve the problem. In my opinion, the best method to handle conflict is mediation. I would take six steps for resolving a conflict.

Calm the employee down first, so that you can have a dialog. Begin by listening to everything they have to say. If the upset employees are stopped before they finish, they won’t hear anything the manager has to say. If this manager wants resolution, he/she must listen.

In the case, to demonstrate that the manager is listening to Charles, she would maintain eye contact and a neutral expression. Tilting her head slightly to one side gives the message that she is listening. She shouldn’t nod her head, because Charles could interpret that as agreement.

Demonstrate understanding of what was just said. It is important to realize that you do not have to agree with what has been said, in order to empathize with the employee. The employee needs to believe that you have a firm grasp of the situation, the facts, and how it affects them personally. Empathizing demonstrates to the upset employee that they have been heard.

Charles’ manager could recap his comments and empathizes, like “You are obviously angry about this rumor. You believe that Angela has been spreading a rumor about you and you think I need to take action. I understand how frustrating that must be.” She couldn’t use his exact words. She should focus on the problem rather than the personal attack. Therefore, it is no longer Charles against his manager, but Charles and his manager, against the problem.

Contrary to what we might have learned as children, an apology doesn’t have to mean we did anything wrong. Worded carefully, it can simply express your wish that the employee had been spared the discomfort. Remember, a heartfelt apology will go a long way towards reducing tension.

In the case, if the manager really wanted to diffuse the situation, it helped to apologize. She could use some appropriate phrase to show her apology. For example, “I am sorry that my not taking action against Angela caused you discomfort. I could not find anyone to confirm that Angela started the rumor.” or “I am sorry that you have been embarrassed. If I had been told about this situation earlier, I most certainly would have dealt with it.”

Before you offer up a solution, know your options. Do the research. Ask for details; facts that back up the employees point of view. This will help to clarify the situation for everyone involved.

In the case, the manager could ask the employee what their solution would be. Good ways to phrase the question include, “How would you handle this if you were me?” “What would be a fair resolution?” and if she thought they can best handle the situation themselves, “What do you want to do about it?”

Unless you created the problem, your job is to help the employee clarify the problem and its consequences. Then guide them in creating their own solutions.

Once the conflict is resolved and the tension is gone, use the opportunity to help the employee develop better negotiation and conflict resolution skills.

In the case, the employee was insulting. The manager ignored the insult when she was trying to diffuse the situation. Now that the conflict has been resolved, she has an opportunity to discuss how they could use a more professional approach for communicating dissatisfaction in the future.

Conflict is one of the most destructive behaviors in business and handling conflict in the workplace is one of the most challenging (Bowin & Harvey, 2001). When managers faced with conflict, it is important that they act, rather than re-act (Griffin & Singh, 2000). I believe the tendency is to become emotionally drawn into the conflict. It’s better to maintain a little emotional distance, and work through the six steps for resolving conflict.

However, this approach will not satisfy the needs you have to make your workplace a productive and pleasant environment. By better understanding how conflict arise, and practicing handling such conflict in an assertive way, it can become far less intimidating and be an aspect of work you can learn to manage rather than have it manage you. 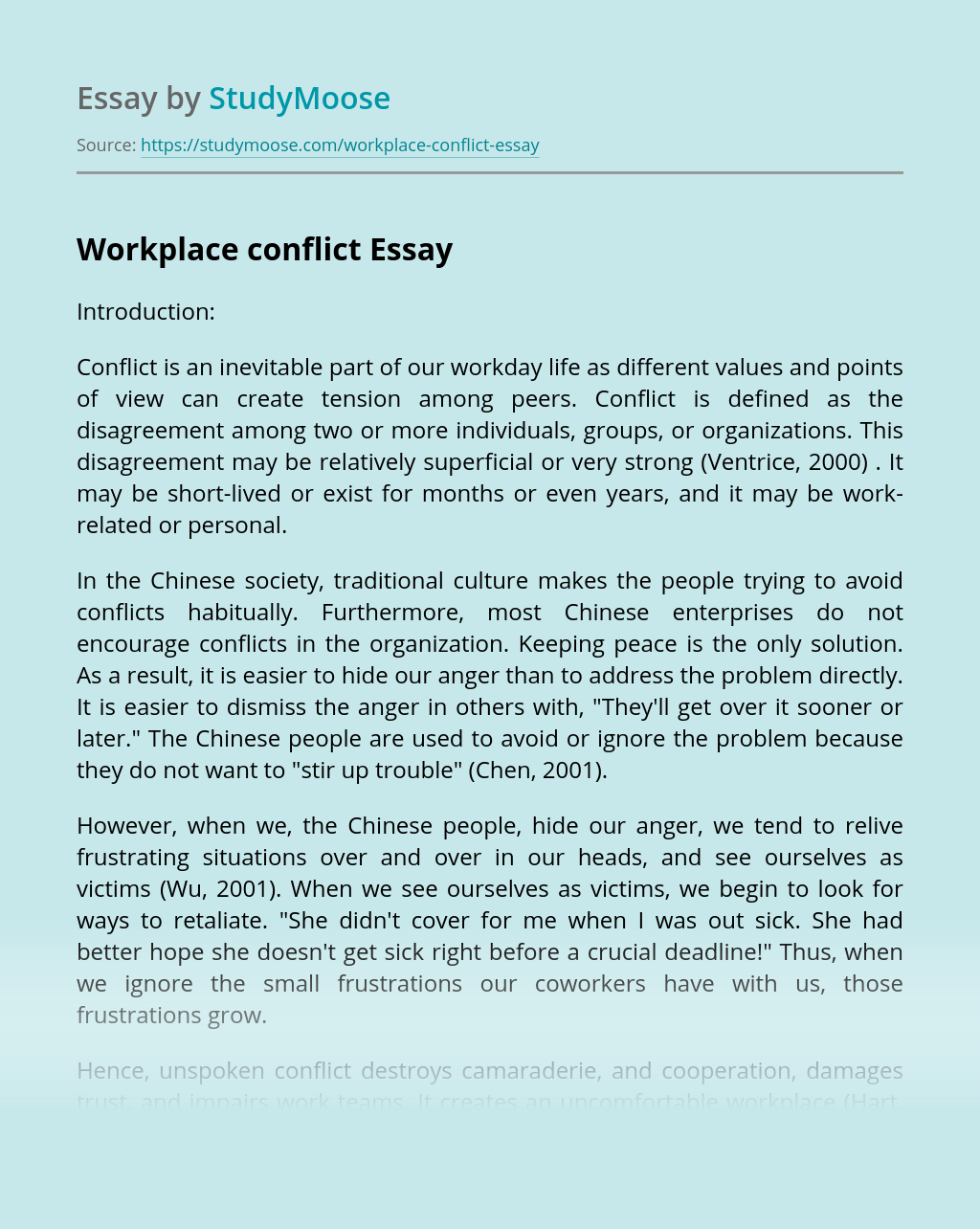