`With reference to your wider reading around 'Purple Hibiscus'

Masculinity is highly concerned with identity and in the context of a shifting and developing society, is presented as an outdated concept that brings about its own collapse. In both Purple Hibiscus and Things Fall Apart, masculinity is moulded on the strict forms of worship of both Igbo tradition and Catholicism and is grounded in the cultural identity of each novel. From this evolves a type of masculinity that not only lies at the heart of each culture, sharing the same morals and values, but one that also thrives and becomes more dominant when a society spreads.

Don't use plagiarized sources. Get your custom essay on
“ `With reference to your wider reading around ‘Purple Hibiscus’ ”
Get custom paper
NEW! smart matching with writer

The type of culture Achebe establishes, is one in which ‘in which violence is an integral part of social relations and in which warfare is an accepted last resort in dealing with conflict among communities’ . Based on these principles, Okonkwo who is intolerable of other religions and preventative of societal advancement, believes Colonialism must be prevented and the way to do so is through violence.

Despite the arrival of the “white man· [who] came quietly and peaceably with his religion” both Okonkwo and the missionaries are in competition for dominance, which inevitably leads to violence. The colonists attack the Abame people when a white man is murdered in their village and torture the elderly members of Umuofia which results in Okonkwo murdering a messenger of the colonists. By using violence as a means of achieving cultural dominance, Achebe not only demonstrates the inextricable link between violence and culture but also reveals masculinity is a reason why Igbo society is unable to protect itself from missionaries and colonialism.

Nwoye, Okonkwo’s son, shows how the aggressive and violent form of masculinity that Okonkwo represents is giving way to a gentler and more passive form through his rejection of his father and involvement with the missionaries. Okonkwo rejects his son for joining the missionaries, threated to kill him, ‘hit him with two or three savage blows’ and Nwoye ‘walked away and never returned’. Through the collapsed father-son relationship of Okonkwo and Nwoye, Achebe is highlighting a new form of masculinity that is emerging, one that doesn’t rely on violence. By the end of the novel, Achebe presents violence and murder as almost a sin, as a man who killed the sacred python was found dead himself the next day; “His death showed that the gods were still able to fight. The clan saw no reason then for molesting the Christians.” In this respect, Okonkwo’s acts of violence reflect his powerlessness and fear or failure which leads to the ultimate collapse of his status in the clan, title as the greatest warrior and the unity of his community when his own son turns against him. Adichie similarly uses a shifting society to expose destructive masculinity in ‘Purple Hibiscus’. Papa Eugene, a character governed by a violent masculine nature, struggles to be himself in a changing society. The setting of the novel takes place in two main cities in Nigeria, Enugu and Nsukka in the last months of a dictatorial regime. Eugene possesses many characteristics of a dictator, shown through his dominance and obsessive need for control in the family, along with his fanatic Catholic principles. He, like the dictatorship, slowly loses the control he holds over his family and Kambili describes “when Papa threw the missal at Jaja, it was not just the figurines that came tumbling down, it was everything”. Adichie later reveals that the figurines are not just ornaments but they signify more, Mama has an emotional attachment to the figures, they act as a source of comfort to her when she’s beaten by Eugene, the notion of fracturing and shattering reflects the fractured family dynamics and the act itself was driven by Jaja who acts as a threat to Eugene’s dominant status. If masculinity is characterised by society then here, Eugene’s violent masculinity is a result of the threat from his son Jaja. Critic Sujala Singh explores the role of children in postcolonial literature and concluded that it ‘becomes a means of commenting on violence legitimised at the level of the nation states’ . The violence Jaja and Kambili are exposed to arguably reflect the suffering and killing of thousands of minority Igbos in the Biafran War. Papa, like the Biafra’s wanted independence, a more dominant position and a sense of leadership but they were rejected by Nigeria and over a million people died. Similar to the killing of Ade Coker for his and Eugene’s publishing of anti-governmental newspapers, the Nigerian government used violence as a means of suppressing threats. ‘Purple Hibiscus’ ends with Jaja in jail for his mother’s crime and critic Jane Bryce argues that this effect of this ‘indicates that the price of patriarchal power politics is being paid by the next generation’ . In this context, where men collapse, women are able to flourish. The female characters are able to rise above these traditional constructs and the shift in society’s attitudes brings them a sense of liberation and freedom. The emergence of new attitudes in both novels is reflective of the emergence of new nations and new literature as the effect of ‘fracturing from colonialism’ . Adichie, as a third-generation writer, played a crucial part in ‘shifting the ground of identity construction’ in Nigerian fiction. Third-generation Nigerian writers embodied a feminist perspective and used it to move Nigerian literature away from the ‘masculine self’ and patriarchal norms. The advancement of female characters within the novels, such as the liberation of Kambili and her family and Aunty Ifeoma’s move to America in ‘Purple Hibiscus’, are symbolic of the progression of Nigerian female writers in society and their works becoming more widely recognised.

`With reference to your wider reading around 'Purple Hibiscus'. (2019, Dec 14). Retrieved from https://studymoose.com/with-reference-to-your-wider-reading-around-purple-hibiscus-example-essay 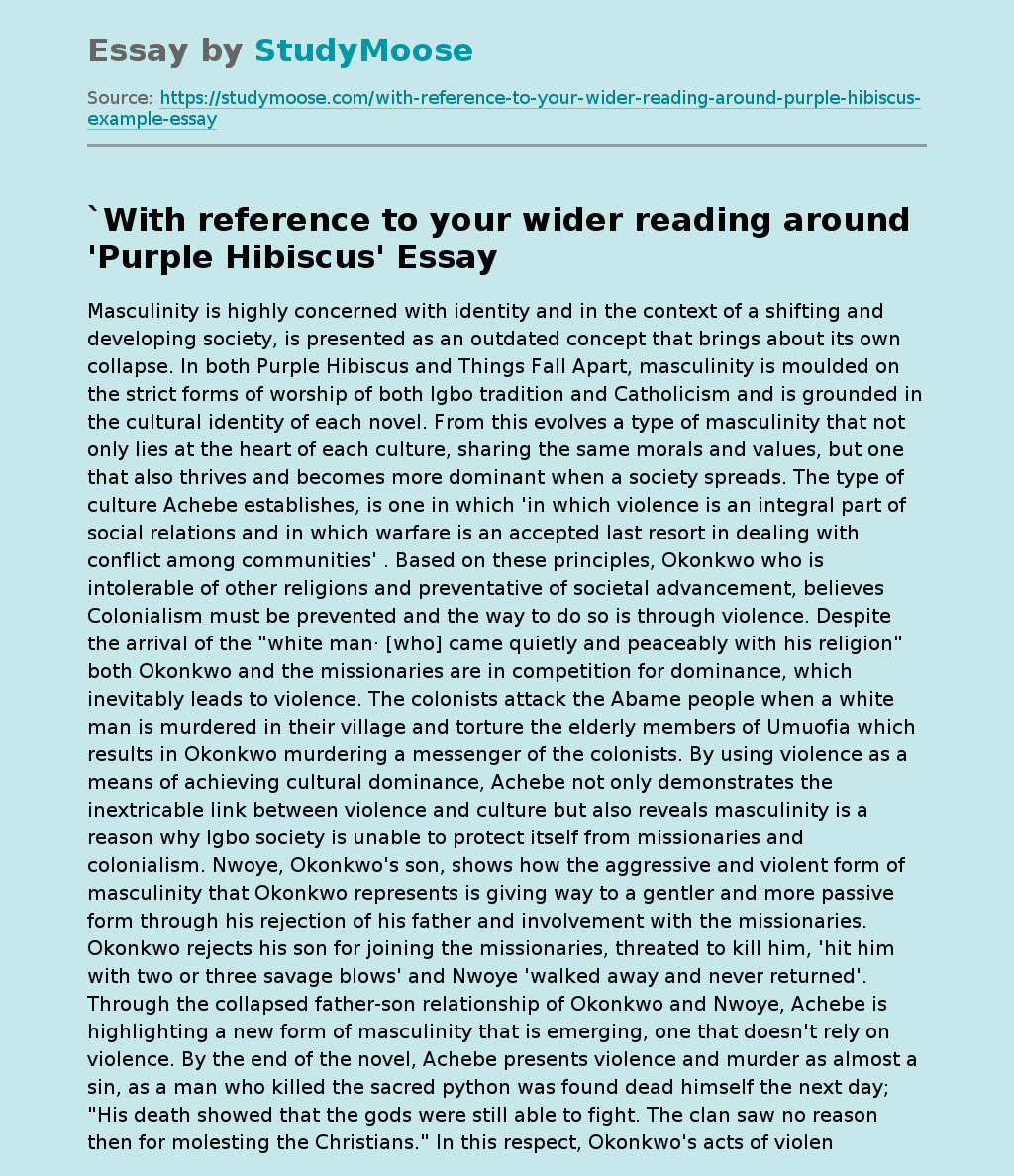