Why was the Roman Army so Successful?

The legions of Rome were one of the biggest factors in Rome’s success as an empire. They conquered vast quantities of land, and were often used by the government to improve the morale of people living in cities, which often had parts that were cramped and unsanitary. The legions were set apart from contemporary armies due to their level of organisation and especially as they fought as a unit and not as individuals, as many tribes did.

The swords of the Roman Legionaries were different to many people at the time.

Don't use plagiarized sources. Get your custom essay on
“ Why was the Roman Army so Successful? ”
Get custom paper
NEW! smart matching with writer

This figure shows a sword, or _gladius_, found by archaeologists. Though the hilt, guard and pommel have rotted away – showing that they were probably made primarily from wood – the tang and blade remain. The sword was narrow, so that it could fit between small gaps between shields in the close formations favoured by the Romans, and also so that it could easily slide between the ribs, reaching the internal organs and maximising damage, although soldiers were often encouraged to go for the throat and groin; the location of several major arteries.

The thicker fuller of the blade tapering away at the edges allowed for sharper blades. A slight discolouration running down the centre of the blade may indicate a ‘blood groove’, through which blood could run so that the sword did not get stuck in the wound as easily. The sword was also very narrow, and this was probably done purposely, in order to stop soldiers overextending or slashing away, and encouraging thrusting, which was and is harder to parry, as the sword has to be knocked from its path, rather than just blocked.

Flavius Vegetius Renatus, in ‘De Re Militari Book I: The Selection and Training of New Levies’, which was written in 390 A.D, says that “a stab, though it penetrates but two inches, is generally fatal”, as well as citing the reason that “the body is covered while a thrust is given”, whereas when slashing, “it is impossible to avoid exposing the right arm and side”. This picture shows a Pompeii style sword, which was on Trajan’s Column: Trajan had the column made in around 100 AD to commemorate military victories. This gives a very good idea of the size and shape of an original Roman Sword.

Another weapon generally used by the legions was the _pilum_, plural _pila_. The head shown in this image was estimated to have come from the first or second century AD it can be seen that the head was considerably wider than the neck. The base of the throwing spear was made from wood, which has rotted away. The spear was designed to have considerable penetrating capabilities, as the shaft was very heavy – and sometimes weighted with lead. A pair of demoralizing volleys would kill many of the enemy, and those that landed in shields could not be taken out very easily, as the neck bent on impact, so that it could not be pulled straight out. The pila encouraged the enemy to flee, and if a rain of missiles was kept up, only the most disciplined troops would stand. Each legionary would have carried two of these spears, to be thrown on command, and each man had to be able to throw one at least 30 metres.

The Roman shield played a large part in the defence of the legionaries, and could also be used as an offensive weapon.

Made from layered wood, a legionary’s shield could block all but the most penetrating of blows. With a metal rim to ram down on fallen enemies and hold the layers together under blows, and a large metal boss to ram into the enemy and deflect central blows, legionaries learned to use the shield well both offensively and defensively. When in formation, the shields synergized with each other, forming a near impenetrable wall, through which the legionaries could still stab to deadly effect.

One of the most famous Roman tactics was to form a _testudo_, or tortoise, using shields for cover. This picture details a part of Trajan’s column, and this piece depicts Roman legionaries assaulting a fort under the cover of their shields. Due to the tightness of the formation, soldiers could also on occasion have enough spare shields to armour the front and sides of the formation, as shown in the above image. Used mainly to counter missile troops, the shields took great strength to hold up for sustained periods of time. An example of the enemy that it was used to counter is British slingers. These men used strips of leather and ovoid lead shots to great effect, as each bullet could shatter a legionary’s bone, finishing his career in the legions, even if he survived the trauma, and generally forcing him to beg for the remainder of his life. The small size of these missiles allowed some to fit through small gaps between the shields, but the majority were stopped whilst the legion marched on. This picture shows an example of a sling bullet: This bullet is probably Seleucid in origin, as seen from the anchor, and was used between 220 and 130 BC, in the siege of Dor.

A considerable obstacle to the Legions was the number of small rivers and streams. Gradually, the legions became better at engineering, until every soldier was able to complete his part of a simple pontoon bridge, as shown here: Also taken from Trajan’s column. These pontoon bridges were constructed from boats, over which planking was laid. When horses were required to cross, a small layer of earth was sometimes put on the bridge, to reassure them. Stone Roman bridges remain famous for their durability to this day, and their three or four arches was a roman concept, so that weight on the top of the bridge merely forced the keystones of the arches in further, increasing the strength of the bridge. The legions were also responsible for the construction and maintenance of these bridges during peacetime.

The legions were and still are famous for their extremely straight roads, which cut down travelling times between major cities. The map shown, courtesy of historylink102.com, details the 53,000 miles of roads of the Roman empire, all constructed by the army, with milestones to tell travellers how far they had to go:

This is one of the many milestones along the Via Appia. Standing out from their surroundings, they provided travellers and, more importantly, armies, with important information about where the road led and how far it was.

The high mobility of the legions was one of their keys to success, as in times of war armies could be easily amalgamated and marched at speed along the wide stone roads.

This shows a modern diagram of a cross section of one of these roads, revealing why it was so successful. The centre of the road was normally raised, in order to maintain a dry surface, and rainwater was channelled into drainage ditches on either side of the road. This image shows the Via Appia – a road out of Rome still surviving to this day. Many Roman roads are still used today, though they have been resurfaced, such as Watling Street. Taken again from Trajan’s column, this picture shows Roman legionaries cutting down trees in order to create a cleared route for a new road – Josephus says in Book 3 chapter 6 that “Vespasian sent… ten out to every hundred… to cut down the woods that hindered their march”.

When Roman Legions went on the march, they nearly always – there were some exceptions – set up a temporary camp in order to have an easily defensible position in case they were attacked at night.

Josephus says in Book 3 Chapter 5, that “the outward circumference hath the resemblance to a wall, and is adorned with towers at equal distances… They also erect four gates, one at every side of the circumference, and those large enough for the entrance of the beasts, and wide enough for making excursions… They divide the camp within into streets… the tents of the commanders in the middle… a trench is drawn round the whole”.

It is well known that the Roman Legions kept their camps in the same order every single time, so that firstly every legionary knew his way around and also so that soldiers would feel at home even if they travelled to the other side of the empire – the camp would be almost exactly the same in layout.

This shows the layout of a large, more permanent Roman camp. Josephus writes that each camp had at least 4 gateways, one on each side of the camp, and that these were high enough and wide enough to take horses and exit the camp in large numbers. He details a wall, which would have been cut and built by the legionaries, and a ditch in front of the wall, the earth from this forming the rampart into which the stakes were fixed. These preparations would have created a very formidable obstacle to any attacker, no matter how large, especially when equidistant towers were raining down fire. Tents were for 8 or 10 men, depending on the size of the legion, and set far enough back from the wall so as not to catch fire from any burning projectiles that may have crossed the wall.

Roman Legionaries’ footwear was very important to them, as a lot of their work involved marching along hard roads. This sandal sole would have been reinforced with iron hobnails to make it last longer – iron wears down a lot slower than leather. Additionally, the iron would have made a lot of noise on the stone of the roads, and would have impressed anyone who saw the legion passing.

This tin plated bronze helmet was an item essential for survival for any legionary. The domed top would deflect anything but a direct hit perpendicular to the surface, whilst the front peak would stop a blade sliding down the front of the helmet onto the face. The rear of the helmet flared out to protect the neck, and two hinged cheek pieces protected the sides of the face. The front was left open, as vision was a legionary’s most useful tool. The ears themselves are also exposed to enable the legionary to hear shouted orders in a battle.

In conclusion, it can be seen that the Roman army was superior to all others at the time due to superior weaponry and fighting techniques. Fighting in formation and as a unit allowed the Romans to easily overcome any larger tribe that fought as individuals. The camps offered a safe place to retire to each night, and very strong and durable roads and bridges allowed the highest mobility of any infantry army of the time. The Roman army was probably the most advanced in Europe for nearly a thousand years, as most of their techniques were lost after their demise.

Why was the Roman Army so Successful?. (2016, Jul 25). Retrieved from https://studymoose.com/why-was-the-roman-army-so-successful-essay 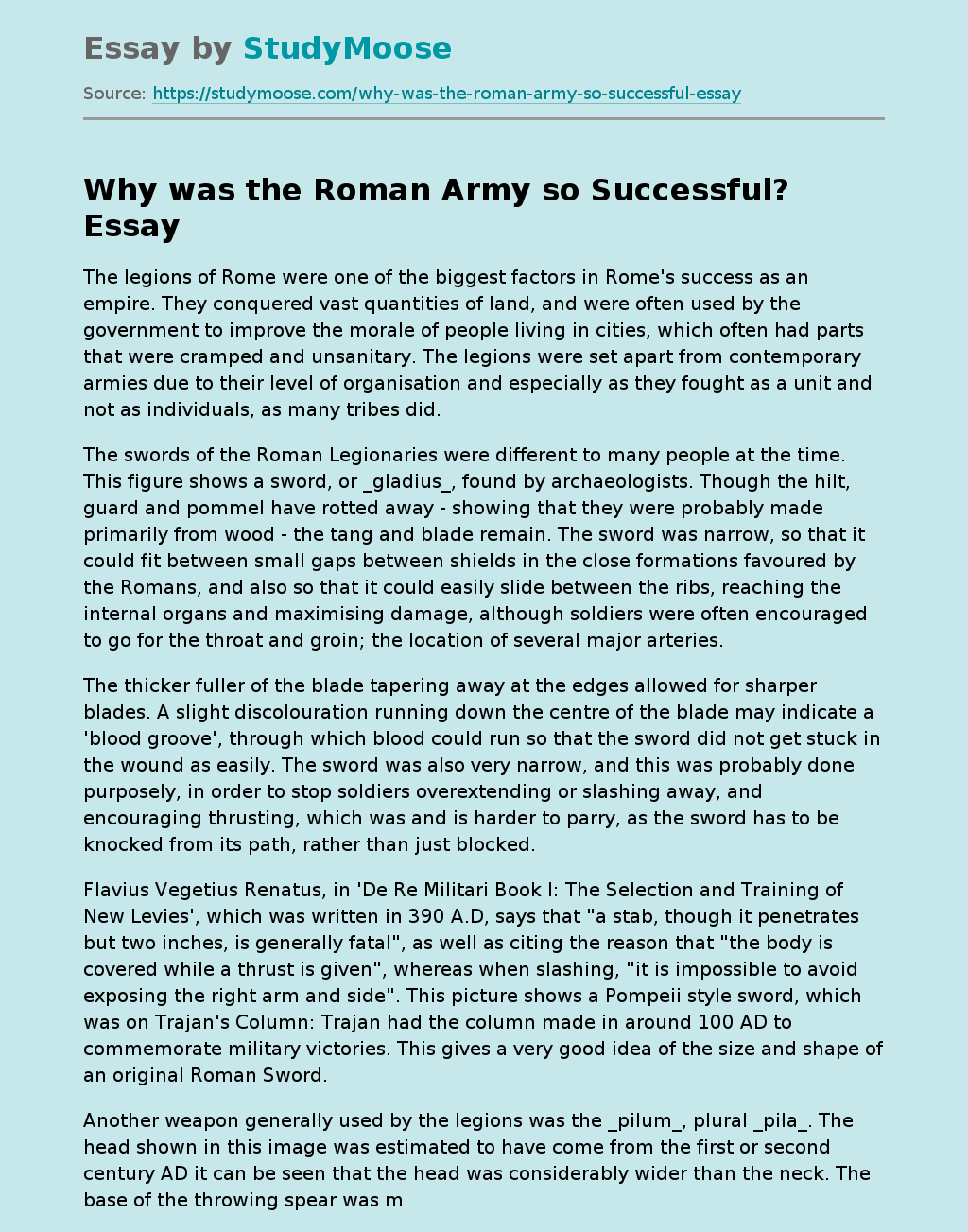