Why the Minimum Wage Should Be Raised

Debate of whether the minimum wage should be raised is currently taking place. Finding the perfect minimum wage that will be good for both the employee and employer is a process and it has been an important controversial issue for many decades. The minimum wage was last increased on the 24 of July, 2009 at the federal level. It increased from six dollars and fifty five cents to seven dollars and twenty five cents (Levin-Waldman, 2001). Every morning people go to work so that they can be able to afford a good life for them and their families.

No one who is working full time should be living in poverty. This makes the essence of working to lose meaning. In 1968, the minimum wage was high enough to cater the needs of a family of three comfortably keeping them out of poverty.

This is fundamentally wrong. The common citizen wakes up early every morning to go to work but only the country and investors benefit. If the increase in productivity had gone hand on hand with increase in minimum wage, then it would be twenty two dollars an hour currently. But the fact is it didn’t and today many hard working parents are working fulltime and still live in poverty. This uneven balance of the distribution of wealth is causing a significant amount of our population to suffer below the poverty line (Great Britain, 2011). Education is an essential key if one is to be employed and the cost of education has gone up drastically in the past twenty years. Employers should be paying employees what they deserve, which is more than the minimum wage today. With the progress in technological fields that are been experiences in the future work may be harder and complicated and thus will require employees to have good education. Children cannot improve and better their lives if their parents cannot afford to pay for their education.

This leads to children having inadequate education as well adults going to collages (Waltman, 2008). It has reached a place where some children rely on themselves to pay for their education. Some even drop out since tha cannot afford the tuition fee because of the minimum wage they earn. This is just not fair to the children who are the future. By increasing the minimum wage, many people will be afforded the opportunity for a good and better education for themselves and their children. By doing this we are able to secure the future of the children. As we advance in technology people will be forced to understand and learn more. The demand for educated workers is currently on the increase and so is the price of education. A person living on their own cannot survive on the minimum wage job. This is because their living expenses would be just too much.

Too many people who earn minimum wage depend on assistance from the government just to keep their heads above water. By increasing the minimum wage more than 3.6 million people will stop depending on the food stamp rolls. This people will have satisfaction and dignity of buying their own food. Increasing the minimum wages will not cause job loss as many people tend to speculate. Research concludes that increasing the minimum wage has little or no effect on job growth and availability. More workers will be able to enter the job market when wages rise (Jones & Farness, 2002). This allows businesses to choose from high skilled workers. By doing this, small business owners increase their opportunity to improve productivity by using high quality workers who were not previously available.

Others claim that by increasing the minimum wage major cost will be passed to the consumers. They claim that higher wages will lead to higher prices and those cost increases would effectively eat up the extra earning the workers take up home. But according to Waltman (2008), increase in the minimum wage will have little or no impact at all to the price of goods and services offered.

The minimum wage needs to be increased for people to survive in the current world today. Education, medicine and food all cost more currently. Currently welfare reforms force more poor families to depend on their earning from low paying jobs. Even though by increasing the minimum wage poverty may not be completely solved it will be greatly reduced. An increase in the minimum wage will also motivate people to get employed. This is because they would fill that they are getting paid for their services (Levin-Waldman, 2001). Increasing minimum wage will also increase productivity in many companies since the employee will be motivated to work hard and be creative. As technology keeps on improving and getting better people need to be more educated and worked even harder. By increasing the minimum wage people get encouraged to be educated and live better lives.

Why the Minimum Wage Should Be Raised. (2016, Sep 11). Retrieved from http://studymoose.com/why-the-minimum-wage-should-be-raised-essay 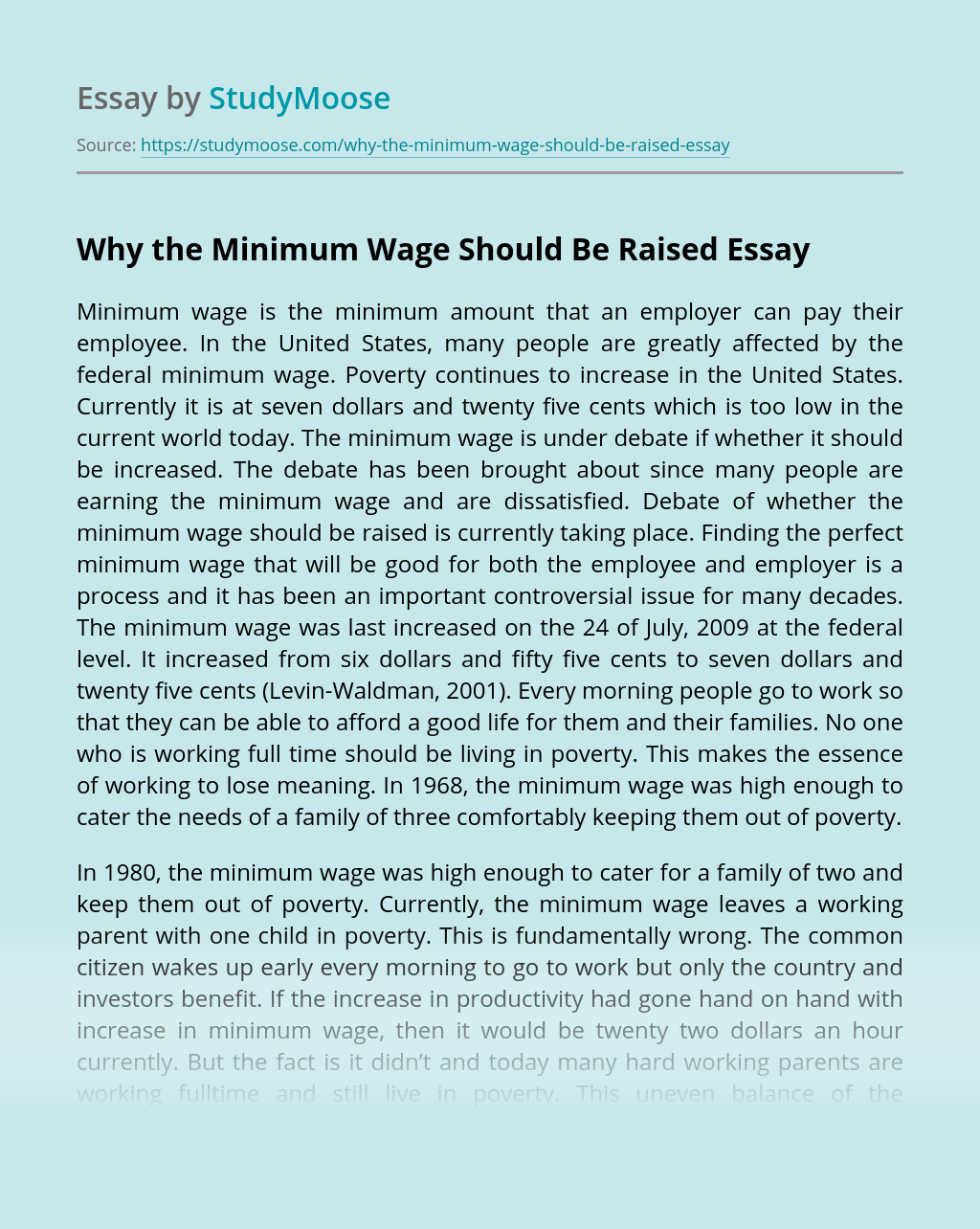 Don’t waste time
Get a verified expert to help you with Why the Minimum Wage Should Be Raised
Hire verified expert
$35.80 for a 2-page paper
Stay Safe, Stay Original