Why Should We Vote

Voting in India is a Constitutional right if one is a citizen over 18 years of age. However, that also makes it optional. It has been a tendency among voters, especially in the urban areas, to treat the voting day as a day of rest. While skipping the vote may not seem to cause any harm,the long-term consequences are disastrous.

Here’s why every citizen of India must cast his or her vote:

Don't use plagiarized sources.
Get Your Custom Essay on Why Should We Vote Just from $13,9/Page

If the people of India think that the ruling government is not performing its duties satisfactorily, they can show it the door by voting against it. Refraining from doing so can result in the same party, or a worse one, being elected for the next five years.

Every vote counts: In a country so populous, a voter might feel that a single vote does not make any difference. However, the balance tilts when this becomes a national attitude and lakhs—perhaps crores—of votes are not cast.

By casting their vote, citizens may not necessarily be able to get the best candidate elected—politics being what it is—but by avoiding casting their vote they improve the chances of the unsuitable ones winning the polls. At the end, it is only the voter who has to suffer through poor governance.

Get heard: Voting offers every citizen a medium of expression. In a country as vast and diverse as ours, different regions have different concerns and priorities. The process of voting allows every citizen to have a say in what should constitute the matters of importance by voting for the candidate he or she deems fit for the purpose. While it is true that the outcome of elections is seldom predictable, by not casting one’s vote, that citizen is giving up on the chance of getting heard.

Voting as a responsibility: Voting is as much a responsibility as it is a right. The whole edifice of Indian democracy is built on the foundation of voting. If citizens are not careful about casting their vote—or worse, skip their vote altogether—it will jeopardize the existence of our democratic Republic.

Voting as an honor: Finally, voting is an honor conferred on the citizens by the founding fathers. By exercising their right to vote, citizens demonstrate their respect for the history of the country.

It can’t be denied that the recent democratic experience in India has not been encouraging. For the past several years, India has been struggling with rampant corruption, unsure economy, and unclear foreign policy. Election after election has seen ineffective governments come to power that have done more harm than good. However, not casting one’s vote will only worsen the condition. It is our duty as responsible citizens of India to make informed decisions and choose the best candidate from those presented. Moreover, with reforms like Right to Reject gaining wider support, it wouldn’t be long before the system of elections is improved.

Voting gives us a chance to voice our opinion.

If we want our government to be responsible and accountable to people, then we must vote dutifully. It gives us a chance to voice our opinion and decide which party should work for welfare of society. There can be many reasons for not voting such as political apathy on part of people, but to keep the democracy alive, people must come out and vote. We must cast our votes to help flush out corrupt leaders

Our constitution is based on the principle of one citizen, one vote, one value, but one value has not come into existence till now. Votes are being bought and this is happening because citizens are not exercising their voting rights. One must understand that when we have accepted democracy, we have also accepted voting as part of our democratic right. We must cast votes to help flush out corrupt leaders from politics. By not voting, you are sacrificing your sacred right.

Voting is a sacred right of every individual and exercising his/her voting rights is the duty of the citizens of India. If you do not vote, you do not have any moral right to criticise the Pune Municipal Corporation, the elected corporators or any other political leaders. If citizens do not vote, they are unnecessarily sacrificing their sacred right. The youth must especially understand how important and prized their vote is, which will help shape the future of the country.

Why Should We Vote. (2016, Apr 18). Retrieved from https://studymoose.com/why-should-we-vote-essay 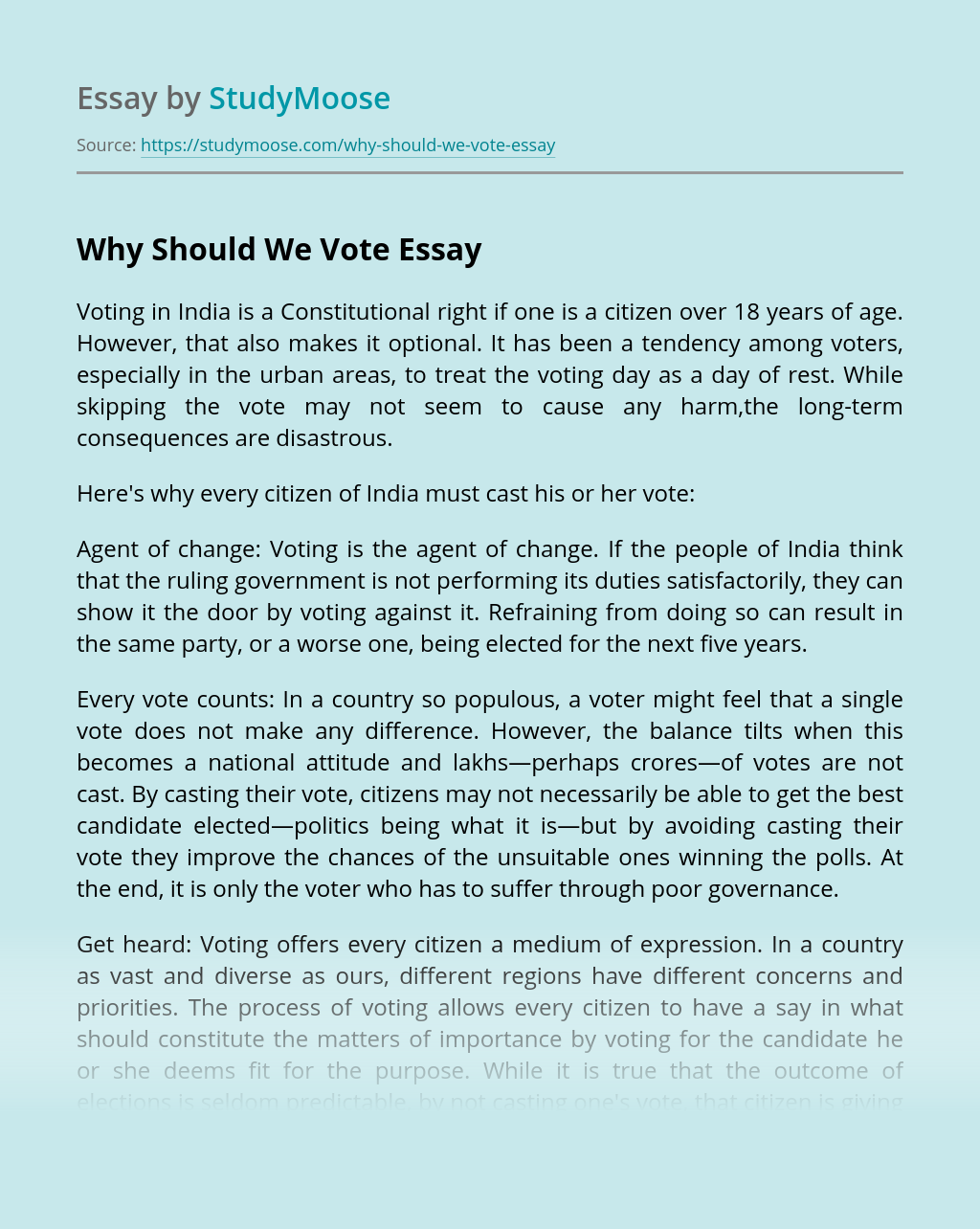 What are Stakeholders in Business

How Today's Managers Use Scientific Management

An overview During the past 57 years, Pakistan’s experiences with democracy have been transitory, as brief democratic rules have been followed by prolonged military regimes.As a nation, Pakistanis have time and again refused to delearn the incremental lessons in parliamentary democracy. Due to this fact, the four military regimes that Pakistanis saw finally reverted to...

For more than a decade now, many Filipinos have trekked to EDSA to commemorate the anniversary of the February 1986 “People Power Revolution,” marking the overthrow of President Marcos’ regime. This year the customary rituals – ecumenical invocations, on-site masses, eloquent political speeches, martial marches, colorful parades, star-studded shows and other diversionary entertainment – will...

Were the Founding Fathers Democratic Reformers?

Despite the fact the founding fathers advised contrary to the establishment of political factions as the Constitution withstood the ratification process, a rift amongst men in President George Washington’s cabinet instituted the move toward the conception of political party. During the time period between 1791 and 1833, a two-party system had begun that demonstrated the...