How does society shape people’s lives?

The aim of this essay is to explore how society shapes people’s lives. The meaning of the word “shaping” in this context means to “influence or affect” (The Open University, 2013, YO32 p 29). This essay will focus on Childhood: Body image and stress related eating disorders, from Block 4, Unit 3 and Psychology: Social influence, happiness and natural and synthetic happiness from Unit 5.

Society has shaped us to embrace a rather different body image to that of 100 years ago to the point where being slim is now considered the norm (The Open University, 2013 Unit 3, 3.

Don't use plagiarized sources. Get your custom essay on
“ How does society shape people’s lives? ”
Get custom paper
NEW! smart matching with writer

2). There has been a shift from the plumper body image seen in paintings dating back to the 19th century, to the ultra slim catwalk models of today. As there has been a shift in body image, there has also been a shift in eating habits (The Open University, 2013, Unit 3, 3.2). It is now less likely for families to sit down together and eat the more traditional three meals a day, with young people now more likely to favour energy dense fast food diets (NSHD) (n.

d.). The National Survey of Health and Development (NSHD) (n.d.) recommends that young people should take regular exercise and have a minimum of 3 thirty minute sessions of exercise per week and drink a minimum of 2 litres of water per day.

Quoted in the Daily Telegraph (Jardine, 2013), Kate Moss said “nothing tastes as good as skinny feels” – comments like this add fuel to the argument. Worries about physical appearance lead to low self-esteem and a need to control weight, which may lead into a cycle of depression and a further loss of confidence (NIMH) (n.d.). Eating habits have changed significantly in the post war period (Young’s, 2004). Young’s points out that these changes in eating habits and the abundance of food now available, in part due to the role played by supermarkets, fast food outlets and the growth in international travel, could also be having a detrimental effect on body image. The World Health Organisation (WHO, 2004) reports 10% of children are overweight lending support to the argument that body image in the media may influence the young. Eating disorders such as AN and BN are attempts by young people to be in control of the way they look and are portrayed by society, which may influence their happiness.

The influence of our social roles within society, whether in our work or home lives, will affect our happiness in our individual roles (The Open University, 2013 p47). Influences on happiness and unhappiness may include factors such as being in employment, strong family support, a good network of friends and a sense of belonging (The Open University, 2013 p48). Being active and keeping one’s mind active is also an important part of being happy and having as many different sources of interest as possible may contribute to this. People who are less active and have fewer contacts may be unhappier than those who don’t (Layard, 2005). How one perceives happiness may vary with the socio-cultural environment in which they were brought up, with people in Western society being generally happier (White, 2006).

The influence of happiness on our everyday lives contributes greatly to the way we feel about ourselves. As a species we have evolved a mechanism by which we can make up almost anything. Gilbert describes a mechanism he defines as an “experience simulator”, which means we have the ability to imagine a situation before it actually happens (The Open University, 2013 p51). Another term introduced by Gilbert is “impact bias”, which broadly means that within 6-12 months following an apparently life-changing event, one will be as happy after the event as before. Gilbert explains “real happiness is what we get when we get what we want, as opposed to synthetic happiness which is what we get when we don’t get what we really want” (The Open University, 2013 pp50-51).

It could be argued that if we play a certain role we can synthesise a greater sense of happiness. The evidence suggests that whatever our role in society is, we have an ability to find the best in every situation. Layard (2005) points out that our societal roles play a major part in perceived happiness. Gilbert (The Open University, 2013) points to scientific data that would seem to confirm Layard’s view that a person’s sense of happiness can be influenced by how we live our lives. Gilbert presents two sets of experimental data as evidence that happiness can be synthesised. These sets of data were from only a small sample size and the results may not be representative of society, so further research should be undertaken. One’s individual sense of happiness, whether synthetic or real, will reflect on how society in general operates. In the author’s opinion, having a happy society can only be good in creating a happier world.

Society has shaped us to believe that body image is all too important, as we are constantly bombarded with a view of the perceived ideal. Looking good would appear to make us happy, possibly more so during our youth, but there are obviously many other factors that can contribute to happiness.

How does society shape people’s lives?. (2016, Aug 17). Retrieved from https://studymoose.com/how-does-society-shape-peoples-lives-essay 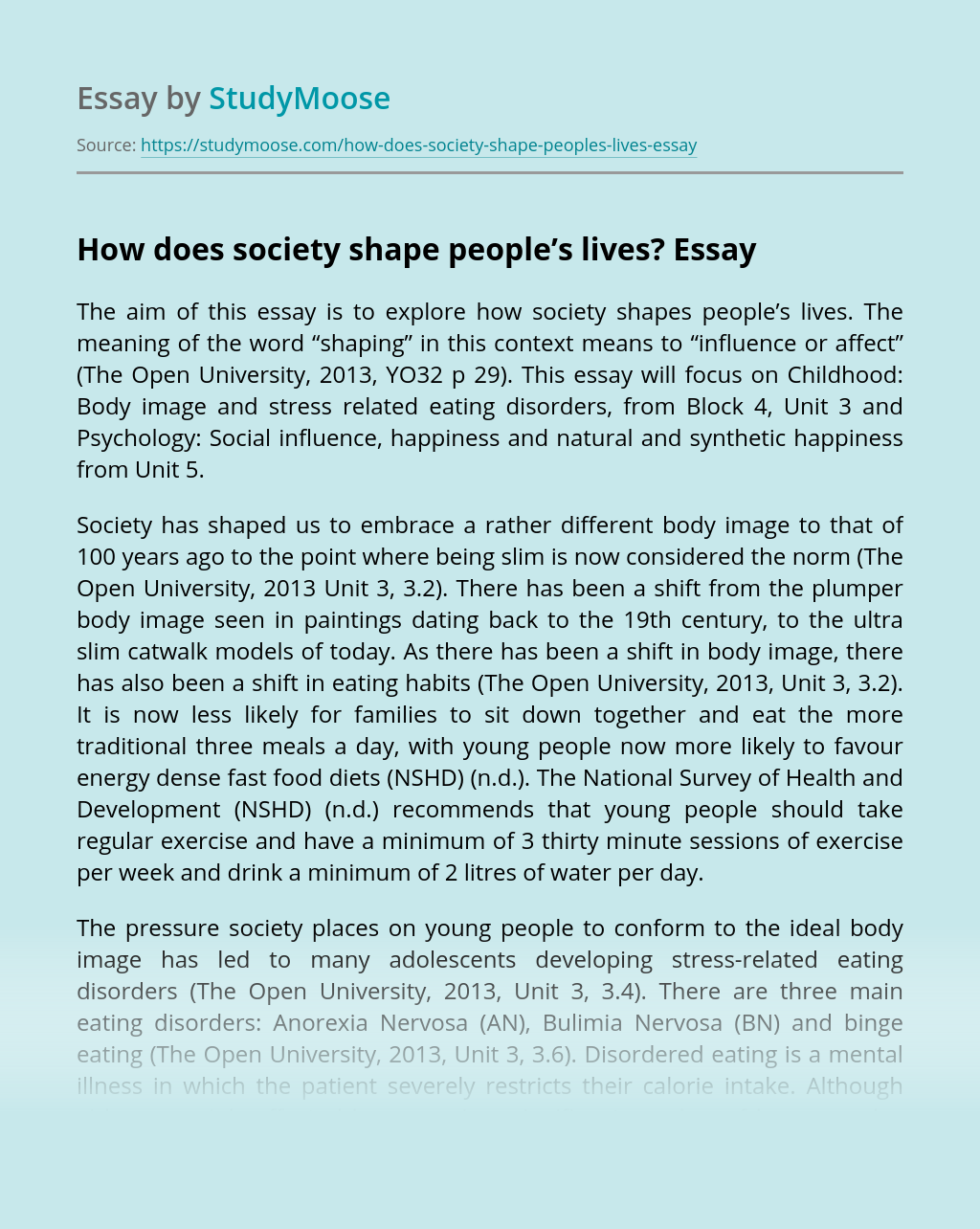