Why Hamlet Delays His Revenge?

In the play Hamlet by William Shakespeare, the theme of revenge is very palpable as the reader examines the characters of Hamlet himself, as well as Laertes, son of Polonius, and Fortinbras, Prince of Norway and son of the late King Fortinbras. Each of these young characters felt the need to avenge the deaths of their fathers who they felt were untimely killed at the bloody hands of their murderers. However, the way each chose to go about this varies greatly and gives insight into their characters and how they progress throughout the play.

Don't use plagiarized sources. Get your custom essay on
“ Why Hamlet Delays His Revenge? ”
Get custom paper
NEW! smart matching with writer

Hamlet, Laertes, and Fortinbras are similar in the fact that each had love, or at least respect their fathers. Enough to make an attempt to wreak revenge upon their father’s murderers at the risk of their own reputation, freedom, and souls. Each character’s father had a substantially high social class in their respective countries, which in turn gives them a high social class as well.

With Hamlet and Fortinbras as sons of kings and Laertes as the son of an aristocrat of high regard in the Danish court, all had a lot to lose if unsuccessful in their ploy.

Each of the sons believed that the killers had dishonored their fathers as well as themselves. Each acts in a way that they consider to be an attempt at restoring it to the family, as honor was a significant thing to uphold on this day. Although similar in age, class, and ambition to destroy their father’s killers, Hamlet, Laertes, and Fortinbras each have characteristics that make them different from each other and show how each acted unlike the others when carrying out their plans.

Hamlet seems to be the one who lets things dwell in his mind before taking any action or making an attempt at trying to get on with things.

He shows this after the death of his father when he remains in the morning and a depressed state for three months without trying to get on with his life. Laertes seems to be the more quick-minded of the three as he makes hasty judgments about Hamlet and is quick to force his opinion upon his sister, Ophelia about his fears for her if she stays in the relationship. “For Hamlet and the trifling of his favor, hold it a fashion and a toy in blood, a violet in the youth of primary nature, forward, not permanent, sweet, not lasting, The perfume and suppliance of a minute?

No more. ” (Act 1, Scene 3, 5-10). Ophelia answers by telling Laertes that he should follow his own advice and withhold from being “like a puffed and reckless libertine. ” (Act1, Scene 3, 49). Polonius later reinforces this reckless view of Laertes character by wanting to send spies to France to observe his son’s habits. In the beginning of the play, we learn young Fortinbras has martial intentions towards Denmark and that Claudius views this as a threat as he makes plans to embark on military preparations of his own to defend his country. So by his father lost; and this I take it is the main motive of our preparations. ” (Act 1, Scene 1, 104-105). This shows the courage Fortinbras has to take up arms against a country that had recently defeated his own. Judging from the differences between the three men, it is obvious that they will each take different paths in dealing with the deaths of their fathers. Laertes acts the most irrationally and hastily, showing his reckless nature as he storms the castle of Denmark overthrowing the guards and demanding answers about his father’s death and questionable funeral.

He is enraged that his father was not buried with his sword and that there was no memorial or tablet displaying their family coat of arms. He gives no thought to the damnation of his soul as he quickly makes a plan with Claudius to poison Hamlet. After the death of his father, Hamlet has no reason to point blame at anyone, as there is nothing to make him believe that his father was killed unjustly. It is not until his father’s ghost appears to him that he is aware of a killer.

He then says “Haste me to know, that I with wings as swift As meditation or the thoughts of love May sweep to my revenge. ” (Act 1, Scene 5, 29-31). But by the end of the scene, he says “The time is out of joint: O cursed spite that I was ever born to set it right. ” (Act 1, Scene5, 188-189) showing that he is no longer in such a hurry for the murder of Claudius. This could be due to the fact that the appearance of his father’s ghost may not seem very reliable to him as he questions his own sanity over what he thinks he should do.

Unlike Laertes, Hamlet has deep consideration for his soul being damned on account of his actions to avenge his father. He condemns himself throughout the play for being a coward. Fortinbras acts the most rationally out of the three. After learning that the late King Hamlet was responsible for his father’s death, he does not act irrationally out of haste like Laertes or become passive and a coward like Hamlet. He takes the time to establish an army and seek revenge upon the country of Denmark as a whole as it was in a war against the country that his father was killed.

When Claudius informs Fortinbras’ uncle, the king of Norway, of Fortinbras’ real intentions, the king demands that Fortinbras retreat in his military attempts at Denmark. He obeys showing that he can be dealt with sensibly and that he does not look so much to murder as the way to avenge his father as Hamlet and Laertes do. “he in brief obeys receives a rebuke from Norway, and in fine makes a vow before his uncle never more to give the assay of arms against your majesty. ” (Act 2, Scene 2, 68-71).

He does not act out of fits of temporary madness like Laertes and Hamlet, but stops to develop a plan and realizes the consequences of a victory or loss. Fortinbras’ plan also turned out to be the most effective. He carried out his plan under the law without the risk of his soul being damned to hell. Even Hamlet saw him as a man of reason and a good leader as he bestowed the crown of Denmark upon him in the end. In turn, Fortinbras displays valiance by showing no animosity toward young Hamlet as Fortinbras asks for Hamlet’s honourous burial. Hamlet’s situation has the most emotional effect on the audience.

One cannot help but take pity on the young prince who has not only lost his father but has had to endure the re-marriage of his mother to his uncle (who he has reason to believe is the cause of his father’s gruesome death). This is why Hamlet appears to the audience as the hero of the play, a “poor soul” who has endured many hardships in such a short period of time while Claudius is basking in his kingship (as well as Hamlet’s mother). His state of depression and madness throughout most of the play may not be understood, but it can be tolerated.

In today’s society, it would be considered most rational to act under the law to seek revenge upon the murderer of a family member. But how can one say that they would be willing not to take out personal revenge and trust the system if they were not in the situation themselves? It is difficult to understand the actions of these three characters, as the audience cannot relate to what they are feeling after the deaths of their fathers. However, after all the revenge has taken place the audience can then decide for themselves who is the monster and who is the man.

Why Hamlet Delays His Revenge?. (2020, Oct 11). Retrieved from http://studymoose.com/why-hamlet-delays-his-revenge-essay 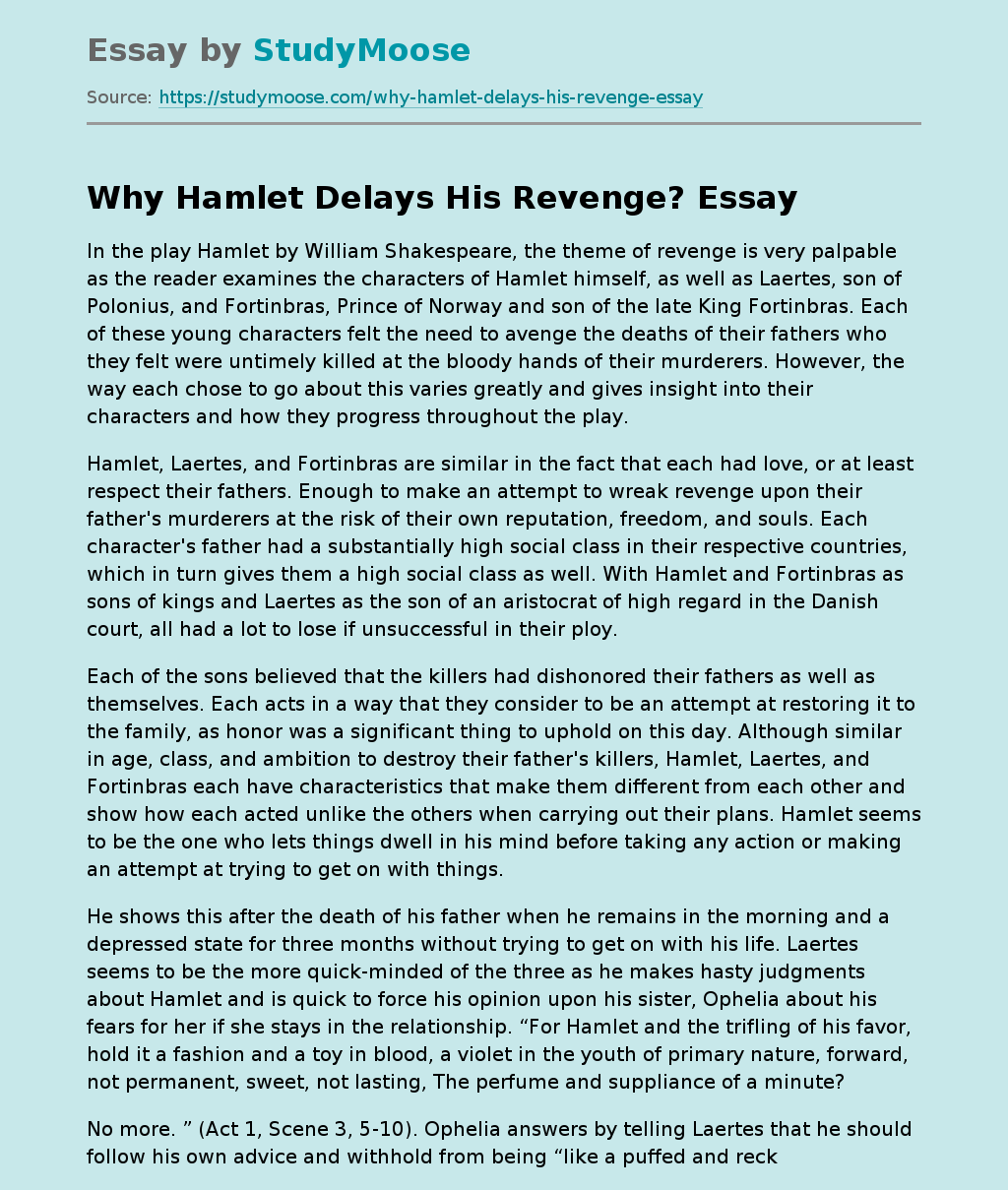