Why Dating in Early Ages Isn't a Good Idea

When you walk in a hallway in your school and see a person that crushes your heart, you wish that you can speak to that person or interact with him/her. But things happen to quickly, as you have to go to your class. The thoughts of the person of your dreams stay in your mind, throughout the whole day and you still want to do something about your person you wish to talk to.

Dating in your early age is a lot worse than it looks.

Turn in your highest-quality paper
Get a qualified writer to help you with
“ Why Dating in Early Ages Isn’t a Good Idea ”
Get high-quality paper
NEW! AI matching with writers

It will cause you to want to turn back when you’re in the middle of it, but you’ll realise that it’s too late. Being an obvious fact, dating in an early age would disrupt your learning. Scientists have proved that it interrupts your thinking, since the thoughts of having to spend time with your true love would be your first priority. Of course, academics are very important to your life, as it would help you get jobs.

But if your mind was focusing on love and dating during your early age, you wouldn’t be successful to get a job. Students become influenced to start a relationship when they see another couple. It is identical to peer pressure, so students get to “show off” or brag about their partner to their friends.

Two facts about dating during early age are; One in four adolescents report verbal, physical, emotional and sexual abuse every year. The majority of teen dating abuse occurs in the home of their partner.

Almost every teen thinks whether they should start dating a lot. Brett Ullman, premiere speaker in Canada or Christianity gave a presentation to elementary students. Brett Ullman told the students that a majority of relationships that take place during elementary school or early high school end up failing, or breaking apart. The reason? Because children and teens at young ages aren’t prepared for dating, due to their maturity and responsibility. Many students think that dating is just a game, where there is actually just a small chance where they can be successful in their relationship.

Should we date in such an early age, is one’s choice. But many teens fall into the obvious trap that would ruin their reputation in school, or in life. Failing can be very light for one person, where they can easily move on to their objective in life. But for the other, experiencing a broken relationship can lead to self harm, depression or suicide.

Dating during preteens or just a little other than preteens is most likely a bad idea. Dating isn’t something that one can easily handle or live through. When you see someone that you wish to date with, forget about it, and only think of that person as a friend.

Why Dating in Early Ages Isn't a Good Idea. (2016, Dec 10). Retrieved from http://studymoose.com/why-dating-in-early-ages-isnt-a-good-idea-essay 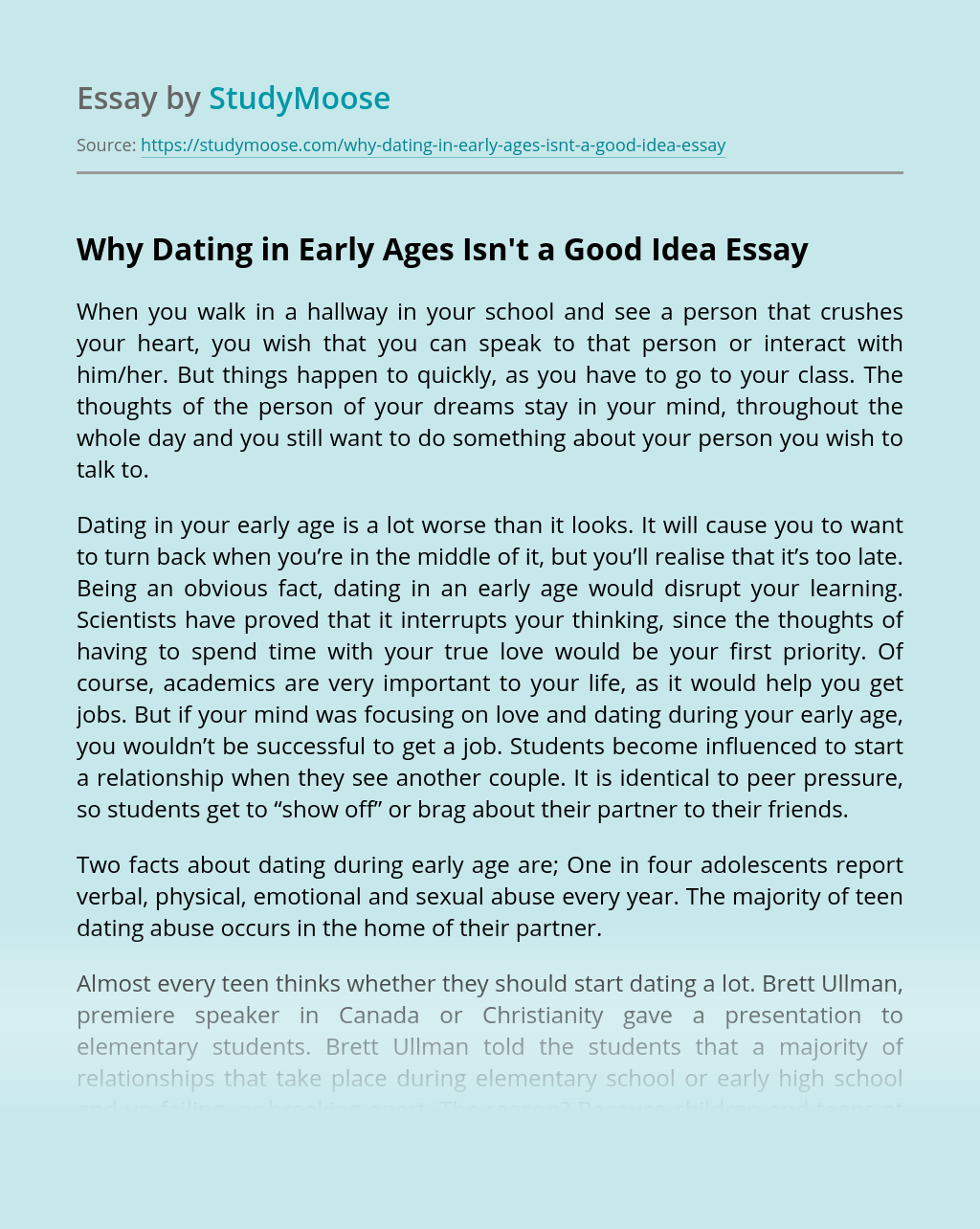 Turn in your highest-quality paper
Get a qualified writer to help you with
“ Why Dating in Early Ages Isn’t a Good Idea ”
Get high-quality paper
Helping students since 2015
Stay Safe, Stay Original