Inexperience: Inexperience can cause accidents because people don’t know what they are doing and therefore can panic and cause collisions or can drive too fast for their skill level and cause collisions in that way. The worst thing people can do is drive to slow for example if someone is driving to slow they could merge into a roadway driving to slow and be rear ended. There have been many occurrences of people driving with inexperience and causing collision due to it.

Don't use plagiarized sources. Get your custom essay on
“ Who Causes Collisions? ”
Get custom paper
NEW! smart matching with writer

Inattention: Inattention can be caused by many factors such as fatigue, distractions, or even friends. All those things take away from the attention you should be using for driving; driving requires your full attention because you need to be aware of your surroundings, speed, and where your vehicle is on the road.

These are especially necessary during inclimate condition where roads can be slick or visibility can be very poor. Any little distraction to a driver can cause a collision I know people that have been in collisions because something fell over in there trunk and made a noise. The easiest way to reduce collisions caused by Inattention is to make sure there are no or minimal distractions in the vehicle i.

e.; turn the radio off and make sure anything in the vehicle is secured so that it can’t shift and distract the driver therefore reducing the chances of being distracted. Another option is to make sure that you are not fatigued to the point that you can concentrate on the driving you are doing.

Inconsideration: Inconsideration can cause collisions can cause accidents because some people don’t think of others on the road; meaning that they can cut people off, tailgate others, or even swerve out of there lane and strike a car. I have been in a few close calls due to people swerving out of there lane or cutting me off nearly causing collisions. An easy way to deal with this sort of driving is to use defensive driving tactics and thinking about
others or for authorities to make more strict rules when it comes to being inconsiderate on public roadways.

Impatience: Impatience can cause collisions because people are rushing or just don’t want to way therefore they ignore traffic laws and drive much more aggressively this sort of driving is much more dangerous on country roads because people can cross into the other lane to pass and get in a head-on collision and possibly kill the other driver as well as themselves. I have seen at least one collision caused by this sort of driving near my cottage because one drive went to pass in the opposite lane without the appropriate amount of space there for killing themselves in the collision. This sort of driving can be minimized by leaving early enough to get there even if there is traffic or other slowdowns and if you are getting frustrated pull over to a gas station or something and get out to take a little walk.

Ignorance: Ignorance causes many collisions each year because people don’t care about anyone but themselves and then they tailgate and do many other dangerous things just to get where they want when they want. I have seen many close calls on the way to and from my cottage where people have almost been nailed by oncoming cars. The easiest way for this type of collision to be reduced is for police to come up with much more strict punishments for people that drive like this.

Irresponsibility: Irresponsibility behind the wheel is something that many young drivers are guilty of because they want to show off before in front of friends or because they don’t realize the risks in being Irresponsible behind the wheel. Being irresponsible leads to thousands of collisions each year many of these collisions include fatality due to speed and lack of control. I know the driver of a vehicle which lost control on September 8th 2012 which took the lives of two passengers, speed was a factor in the collision the vehicle entered a corner to fast leaving the road the speed was caused by irresponsible driving. The easiest way to reduce accidents like that is to make sure that drivers do a competency test before they are allowed to drive with passengers.

Impairment: Impairment is the most dangerous way to drive and is the leading cause of all collisions across Ontario. Impairment of any type is illegal whether alcohol, illegal drugs, or even prescription/over the counter drugs. If you are impaired at all do not get behind the wheel. I know there are multiple collisions each day cause by being impaired. The most effective way to resolve this issue is to put vehicle immobilization breathalyzers standard in all cars but make them effective against drugs as well.

Improper Seeing Habits: Improper seeing happens can be caused by many things such as Tunnel Vision, lack of the proper seeing technique, and fatigue. When driving your eyes always have to be moving to make sure that you know what’s going on all around your vehicle. Your mirrors need to be properly adjusted so that you can see everything you are supposed to see out of them and more importantly your windshield must be clean so that you can see what is up ahead, your rear window must be clear if applicable (some vehicles do not have rear windows which makes mirrors even more important).

If you are fatigued you may not be able to see clearly and to drive safely you need to know everything around you. Not being able to use the proper seeing habits contributes too many collisions which are avoidable if people could see what was around them. The solution to this problem is to research proper seeing habits and making all appropriate adjustments in your vehicle before starting the vehicle. 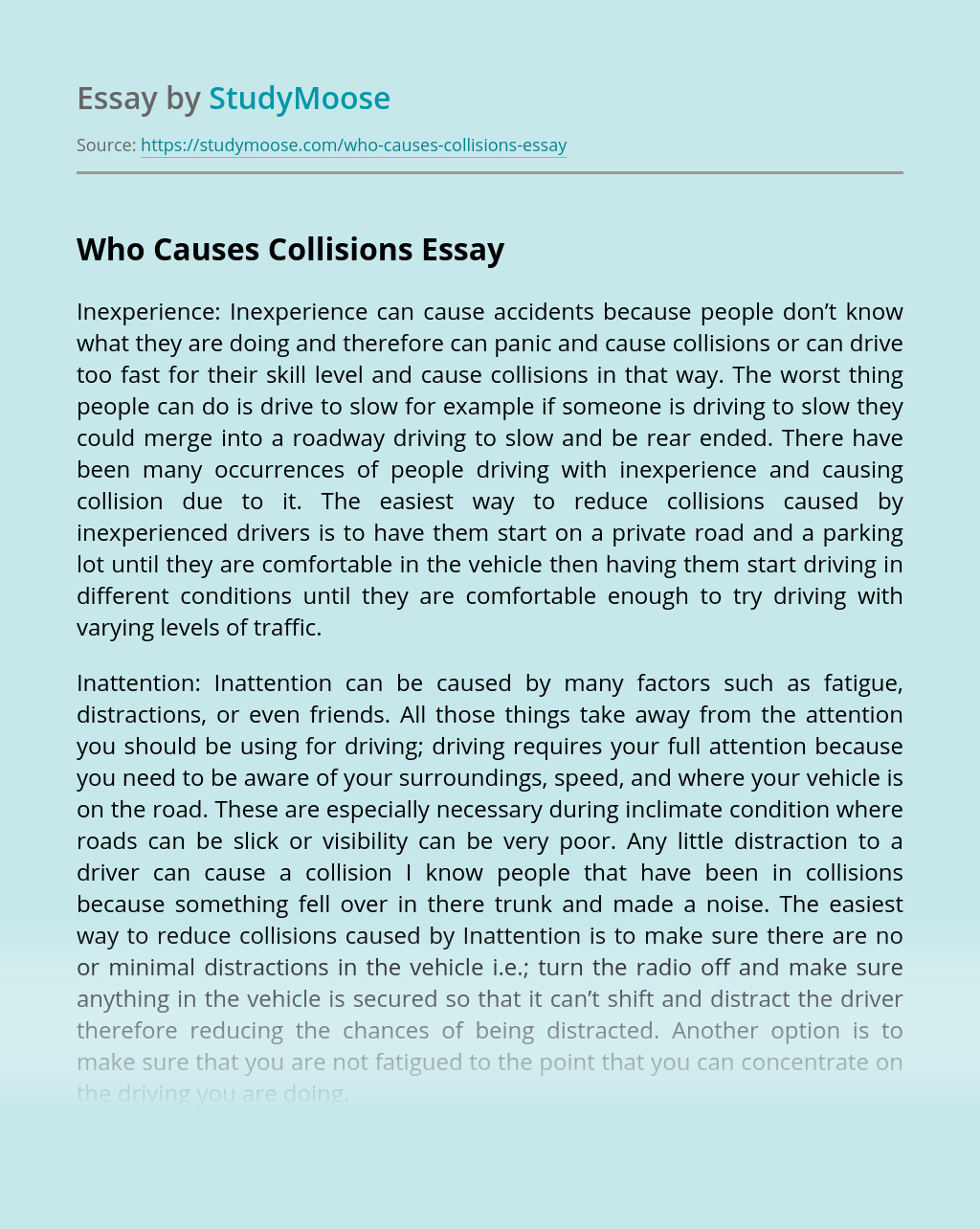