Where Linux went in 2018 and where it's goingFor those interested in?

Where Linux went in 2018 and where it’s going

For those interested in Linux, 2018 came out to be a big newsmaker for the world of Linux and open source. Linux continued dominating the world of servers and smartphones, and the speed of development of Linux distributions and it’s kernel remained persistent.

The year did see important changes within the world of Linux and it’s development. Here’s a look back at the year gone for all Linux lovers.

The actions of 2017 affected 2018, Ubuntu’s decision to drop off the Unity desktop and switch its desktop environment to Gnome.

Don't use plagiarized sources. Get your custom essay on
“ Where Linux went in 2018 and where it’s goingFor those interested in? ”
Get custom paper
NEW! smart matching with writer

The termination of Unity and shift to Canonical, now the focus is on the areas of cloud computing and IoT.

IBM and Red Hat united together to create a hybrid and multi-cloud service provider. IBM took over Red Hat because it wanted to give a tough competition to Microsoft in the server market without having to license an expensive operating system.

Valve released an update to its platform which included a software that would allow users to play games built for Windows to run on Linux. The software that enabled this compatibility is called Proton. Mostly, developers release games on Windows operating system, to bring Windows games on Linux Valve announced a new variation of Wine, named Proton.

Proton is fully open-source software that integrates directly with the Linux version.

While programs are not allowed to read data from other programs, a malicious program can exploit Meltdown and Spectre to get all the secrets stored in the memory of other running programs. This includes our passwords stored in a password manager or browser, our personal photos, emails, instant messages and even business-critical documents. The big cloud vendor such as Google and AWS patched these bugs before anyone else could. Most Linux distributions and IT vendors released patches on time too.

To take advantage of open source, Linux and cloud computing market, Microsoft declared that they joined the Open Invention Network (“OIN”). The OIN is a community devoted for protecting Linux and other open source software from patent risk.Microsoft’s decision to join OIN may be a surprise to some; it is no secret that there have been conflicts in the past between Microsoft and the community of open source over the concern of patents.

Now, as Microsoft joined OIN, we believe it will be able to do more than ever to protect Linux and other important open source workloads from patent assertions.

The Linux community has adopted a new “Code of Conduct (CoC).” The new CoC provides harassment-free experience for everyone who participates in Linux kernel development. A revised version of CoC was finally released.

Torvalds released version 4.20 of the Linux kernel on 23 December, rounding out the year on a high note.

The following Linux kernel versions were released in 2018:

· Fixes for the EXT4 file system, including issues with NFS support.

· More work to address the “Y2038” Unix time problem is being integrated.

Torvalds said in November that he expects Linux 5.0 to happen in 2019, but has downplayed the significance of the advancement of the major version number.

Where Linux went in 2018 and where it's goingFor those interested in?. (2019, Dec 13). Retrieved from http://studymoose.com/where-linux-went-in-2018-and-where-it-s-goingfor-those-interested-in-example-essay 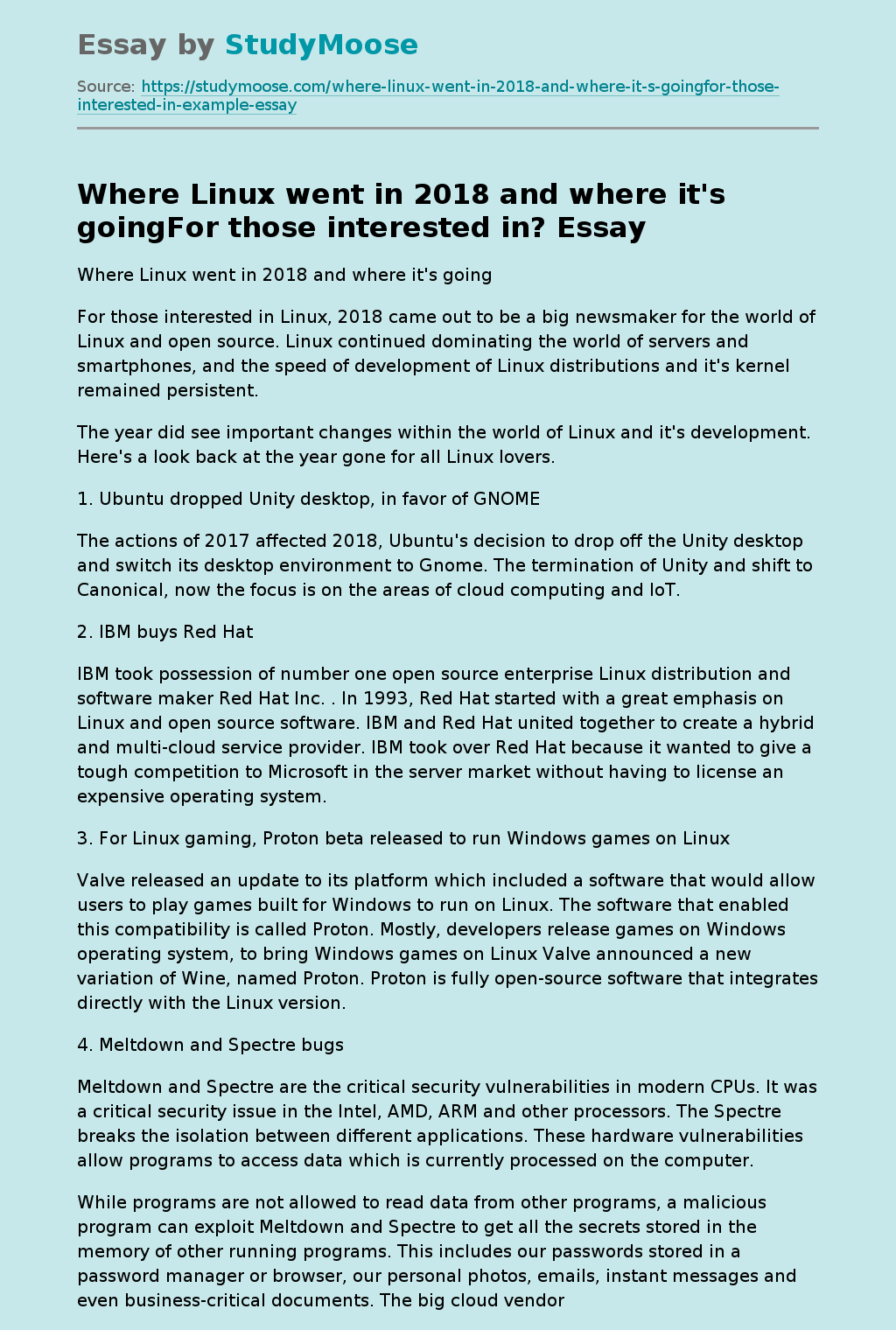